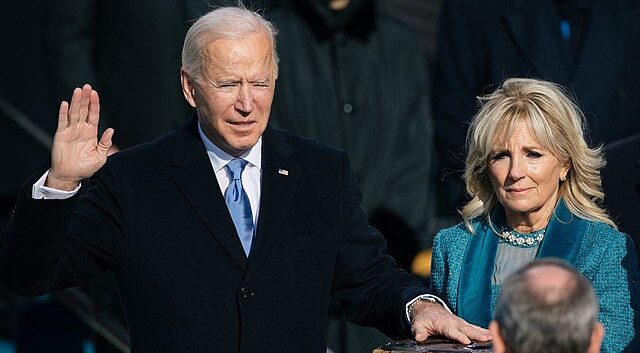 Roughly one year ago, Joe Biden became the presumptive Democratic nominee for President. After Senator Bernie Sanders suspended his campaign in spring last year, I was disappointed but hopeful that he could at least beat President Trump. In hindsight, I was exceptionally wrong to be dissatisfied.

Around 18 months ago, as a political junkie, I became invested and enthralled in the 2020 Democratic primary. Perhaps intrigued by the two-year-long, ridiculously expensive national spectacle that it is, or just pleased to see a left-wing party showcasing its talent and discussing broad ideas without any cynicism, I kept up with it with great interest.

As the marathon went on, my thoughts on the candidates changed, and my preferences altered, but throughout I was far more impressed by the more progressive candidates. Senator Bernie Sanders’ convictions on universal healthcare coverage and on hyper-aggressive action needed to combat the climate crisis appealed greatly. His fellow Senator, Elizabeth Warren, wanted to initiate ‘big, structural change,’ and her wide-ranging and deeply detailed plans made me swing for her at certain points. Plus, there was the more out of the box, start-up candidate Andrew Yang – now running for Mayor of New York – with more innovative, fresh, and more futuristic policy ideas like a Universal Basic Income and regulation of AI. The one candidate, of those with a serious chance, I was rooting for less was Joe Biden. Yes, he was a solid Vice President to Barack Obama, but I thought his policies were too moderate and too small in ambition.

One of Joe Biden’s great strengths is his ability to change; to see what is required and push towards it

After the first few primaries, Mayor Pete Buttigieg’s chances were arguably doomed by mistrusted and delayed Iowa Caucus results which dampened his victory there, and Bernie Sanders was on course to win after taking New Hampshire and Nevada. But Biden came back. In the fourth primary, in South Carolina, he stormed to a huge victory and won heavily on Super Tuesday, all but securing him the nomination.

Back then, before the voting, those progressive candidates could see what the pandemic has made all too obvious: how much the US needs radical change. Economically, inequality is at an extreme high – as Bernie Sanders frequently references, the three wealthiest families in America own more wealth than the bottom half of the country. Racially, police brutality and structural racism are systematic and black household income is just 61% of that of white American households. Environmentally, the US and indeed the entire world is embroiled in a catastrophic climate crisis that, so far, it has done a negligible amount to mitigate, and politically, the US has a system that is so disproportionate that the Democratic party could secure nearly five million more votes in the House in the 2020 election nationally, but still lose 13 seats overall. During the primary process, Biden was far less radical in his policies for dealing with these stagnant and systemic issues. His victory, therefore, was disappointing since, after learning about all these issues, I thought less would be done about them than was required.

Biden is not governing as the moderate 2019 candidate, but as proactive, radical, and effective

But after the pandemic came and the world changed, he became the perfect candidate for the times. His message was unchanged since he launched his Presidential bid in 2019 and it was perfect for a nation in crisis in 2020. Amid Covid-19, an awakening to the unique struggles ascribed to African-Americans and a country more divided than ever in living memory, his message of unity, character, and of being in a ‘battle for the soul of this nation’ struck a chord when the Trump administration became so chaotic in its final months.

One of Joe Biden’s great strengths is his ability to change; to see what is required and push towards it, even if it means changing his previous thoughts and positions. By the time he entered office, the scale of the covid crisis, the deep structural issues in the economy, and racial issues were all too obvious. Since coming to office, Biden has recognised the unique moment we are in. He has not acted as the caretaker President, but a transformative one. His first legislation, the American Rescue Plan, was a two-trillion dollar behemoth, and the next bill in the pipeline, the American Jobs Plan, will likely be a similar amount. In a surprising move, he pledged to half all carbon emissions in the US by 2030, and is pressing Congress to tackle police brutality via passing the George Floyd Justice in Policing Act. In fact, he has said publicly that “systemic racism is a stain on our nation’s soul”. In an attempt to fix major political flaws in the US system, Biden aims to pass the For the People Act, which, among other things, would end deeply damaging partisan gerrymandering.

Should Biden achieve all this or even just some of his agenda, he will likely go down as one of, if not the most progressive and bold Presidents since Franklin D. Roosevelt after the Great Depression. Biden is not governing as the moderate 2019 candidate, but as proactive, radical, and effective. The covid outbreak changed his outlook and it undoubtedly changed the course of his Presidency. In this most unique of moments, he is addressing the current entrenched crises and issues of the day, at the pace they require. Long may it continue.