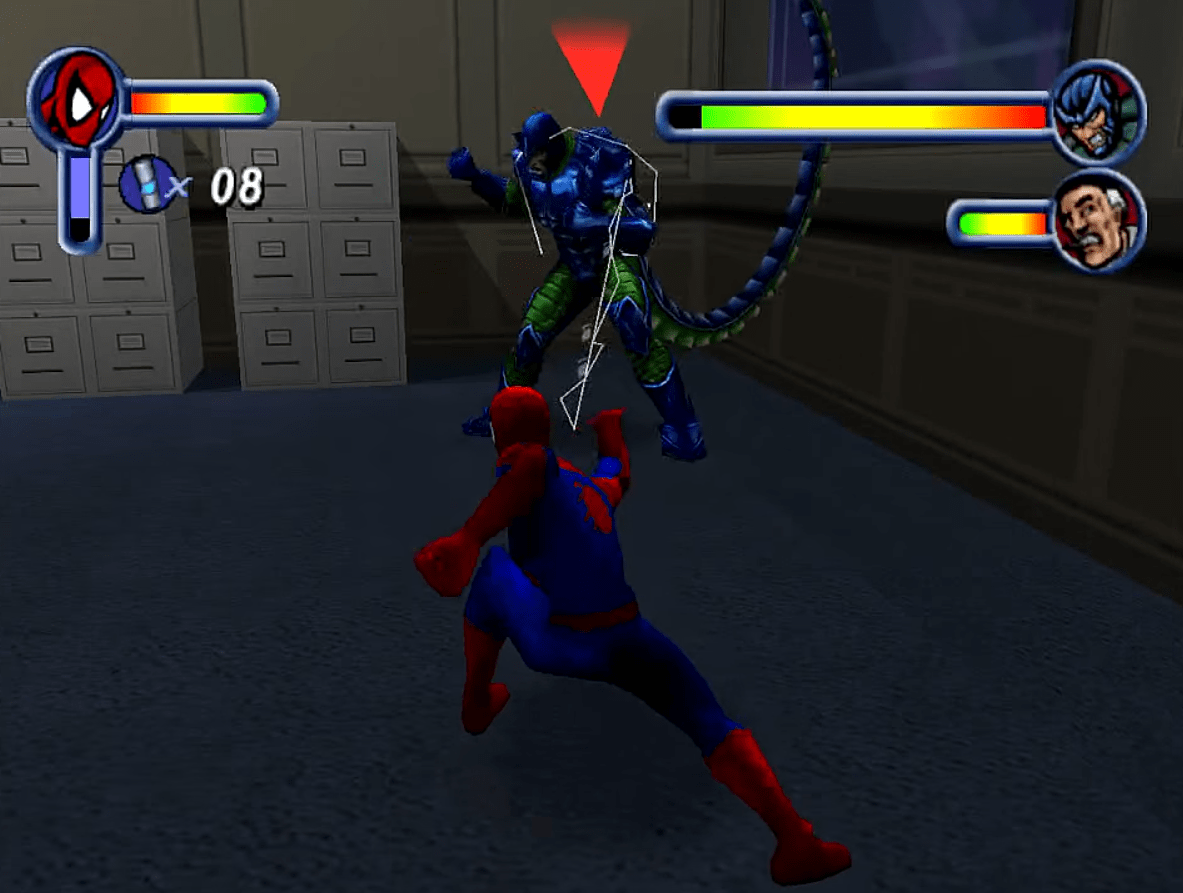 It’s hard to imagine, but there was a time before superheroes were mainstream. And yet, that didn’t mean we were bereft of good superhero games. One of the best pair of titles came in the dying days of the PS1, putting you in control of everyone’s favourite friendly neighbourhood web-slinger, and I think they’re still iconic games.

There were two key Spider-Man games on the PS1. The first, simply titled Spider-Man, came out in 2000, and was developed by Neversoft. A year later, we saw a second, Enter Electro – it’s a direct sequel using the same assets, but was instead helmed by Vicarious Visions. Both games share a lot of similarities, including the appearance of loads of villains from the comics and the wider Marvel universe. They also both boast great voice acting, driving soundtracks, and intuitive gameplay.

These two games cast you as Spider-Man, and you have an impressive skillset. Webbing is your key skill – you can web enemies, use it to increase your strength or form a shield. It helps you reach walls and ceilings, and you can swing between buildings up to twice. Later, you upgrade your webbing, enabling it to freeze or set things on fire. But there’s a catch – you only have a limited supply, so you need to take care not to waste it. Other skills include your spider sense, warning you if danger is nearby, and the ability to stick to walls and ceilings.

With some apprehension about the experience, I revisited the two games, and you know what – they both hold up really well

Each level follows a similar system – you need to reach the exit or a certain point or complete a set objective. These can be things like defeating a boss or rescuing a hostage, and the second game also included some rudimentary stealth sections in a trainyard. You have to solve puzzles as well as contending with enemies, and some can be really tough – the first game sees you fight henchmen on the roof of a moving train, and there’s a challenge to find Mary-Jane in the lair of the Lizard which took me a couple of times.

Something I remember really enjoying are all the extras the developers included. There was narration by Stan Lee before the MCU made Stan Lee cameos cool, and you can change your costume through a wardrobe of the character’s comic history.  There’s a gallery of famous Spider-Man covers, and new ones based on the game’s levels. There’s also a character viewer, letting you look at the 3D models of all the characters and learn a little about them. It’s clear that this game was a labour of love, made by comic book fans for others like them. When I was a kid, comics weren’t mainstream and the major superhero film was Batman & Robin – and yet, this was a game that showed how much could be done by people who actually cared about these properties.

With some apprehension about the experience, I revisited the two games, and you know what – they both hold up really well. Sure, there are points where the controls are more than a little fiddly – the camera can develop a mind of its own during wall-crawling sections, and Spidey is too slow to make some of the fights (I’m thinking Sandman in Enter Electro) anything but a chore. Some, though, were harder than I remember – I didn’t nearly have as much trouble with the Lizard as I anticipated. The story, to be charitable, isn’t the best, and it’s not overly accessible – if you don’t know the characters already, you’ll be lost by the opening cut-scene of the first game.

It truly feels like you’re in a comic book

But these moments are few and far between, with the technical shortcomings not distracting from how free you feel, and how fun everything is. I rarely failed objectives, yet they weren’t often that easy, and I think that’s about the best level of difficulty for a game. It’s easy to get caught up in the sheer fun of everything, and that I still remember so much of it so vividly is a testament to the design. It truly feels like you’re in a comic book – where else would you find electrified samurai armour and mobsters as threats, and face a terrifying chase sequence with a monstrous Doc Ock symbiote?

The games were hidden gems, but the real question of what happened to them is a bit of a weird one to answer. Spider-Man has never really vanished from game consoles, but we’ve never again had a Spider-Man game quite like this one. It’s a shame that the 2002 film essentially killed all hopes of a third game, because it would have been incredible to see the developers push the web-slinger to limit once more.