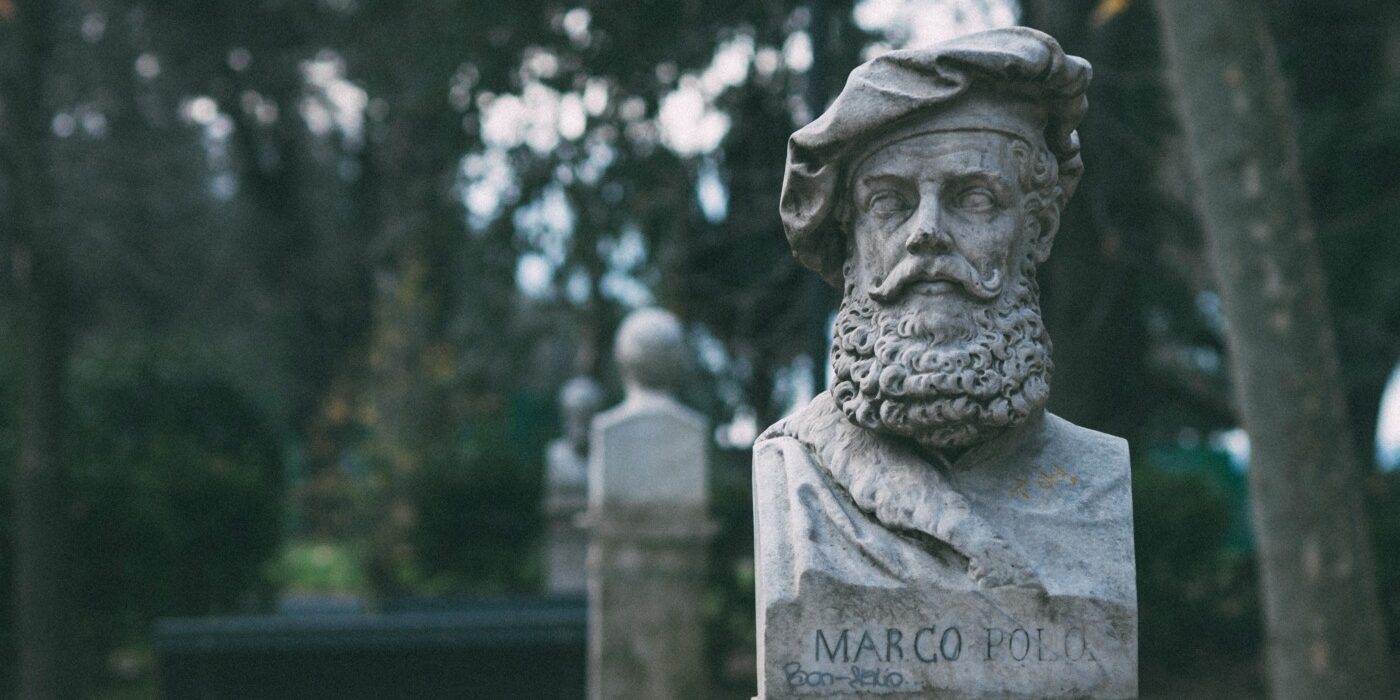 Photo by Egor Myznik on Unsplash

There are few travellers more significant in shaping our knowledge of the world than Marco Polo. The young Marco travelled across Asia at the height of the Mongol Empire more than 800 years ago, and his experiences helped shape Europe’s understanding of the continent through one of the most important travel texts ever. So just who was he?

Marco Polo was born around 1254 into a wealthy Venetian merchant family – his father Niccolo and his uncle Maffeo were both successful jewel merchants, and they spent much of Marco’s childhood in Asia. Merchant families were very important at this time – they expanded long-distance trade, and people soon began to expect access to the foreign goods that the merchants brought back with them.

Such was their reputation that, when the Polo brothers went to China (then known as Cathay), they met the Mongol leader Kublai Khan at his court in Beijing. Khan expressed interest in Christianity and requested that the brothers return to Rome and speak to Pope Clement IV on his behalf, before returning with holy water and 100 learned priests. Khan opened up his empire to travellers and traders in order to benefit from their knowledge, and the Polos were one family he trusted. Pope Gregory X ultimately didn’t grant Khan’s request (Clement had actually died before Khan spoke with the Polos), but the Polos decided to return to Asia, and this time, they travelled with the 17-year-old Marco.

In 1271, the Polos set out on a second trip to China, travelling along the Silk Road – it was a huge network of trade routes connecting the East and West, which was important in terms of economic and cultural flow (and which still exists to a certain extent today). Their route took them through Armenia, Persia and Afghanistan, and followed a route that went over the Pamir Mountains of Central Asia to get to China. They also passed through the Gobi Desert, despite Marco writing the desert “is reported to be so long that it would take a year to go from end to end”. They eventually reached Kublai Khan’s court in May 1275 (a detailed description of the journey is available here ).

He was amazed at the wealth he witnessed and the prosperous cities, and so he investigated the customs, people and culture of all the places he visited, passing this knowledge to Khan

Marco Polo was a gifted linguist – he quickly learned Mongolian and Chinese, and he became a confidante of Khan. He was appointed to high posts in the court and sent on diplomatic missions to places in China, India and some kingdoms of Southeast Asia, such as Vietnam, Burma and Sumatra. He was amazed at the wealth he witnessed and the prosperous cities, and so he investigated the customs, people and culture of all the places he visited, passing this knowledge to Khan. He continued in this role for 17 years, by which point he was really struggling with homesickness. His father and uncle, meanwhile, were worried about what would happen to their immense wealth when the elderly Khan passed away.

In 1292, Khan agreed to let the Polos return home after they convoyed a Mongolian princess to marry a Persian king. They reached Venice in 1295, travelling via the Black Sea and Constantinople, and the information about China they conveyed aroused great interest among the Venetians. Marco Polo went to war in 1298 – he was captured and imprisoned, and he met a writer, Rustichello de Pisa. The writer recorded the stories of Polo’s travels – a book that became well-known as The Travels of Marco Polo – and it soon became a bestseller after its publication in 1300. The detailed descriptions of the wealth of China, the gold of Japan and the customs of Asia were lapped up in Europe, and they inspired countless westerners to travel to Asia in the following centuries. Past the release of Travels, not much is known of Marco Polo’s later life, but he eventually died in January 1324.

Polo’s travels were famous, and their legacy was a strong one. Christopher Columbus purportedly sailed to the New World with a copy of Travels in tow. He thought he would reach Asia and, obviously not knowing about the collapse of the Mongol Empire, he marked up the book with notes in preparation for a meeting with Kublai Khan’s descendent. Polo’s Travels were an invaluable resource – many of the places he visited were remote ones, and it wouldn’t be the 19th century until any Europeans set foot there again and wrote about them. His writings influenced many important maps, and Chinese historians used them to help better understand some of the most important events of the 13th century.

I believe it was God’s will that we should come back, so that men might know the things that are in the world, since, as we have said in the first chapter of this book, no other man, Christian or Saracen, Mongol or pagan, has explored so much of the world as Messer Marco, son of Messer Niccolo Polo, a great and noble citizen of the city of Venice

I could wrap up with a little about how important Marco Polo was, but I think it would be better to quote the explorer’s famous work on his contribution to travel: “I believe it was God’s will that we should come back, so that men might know the things that are in the world, since, as we have said in the first chapter of this book, no other man, Christian or Saracen, Mongol or pagan, has explored so much of the world as Messer Marco, son of Messer Niccolo Polo, a great and noble citizen of the city of Venice.”