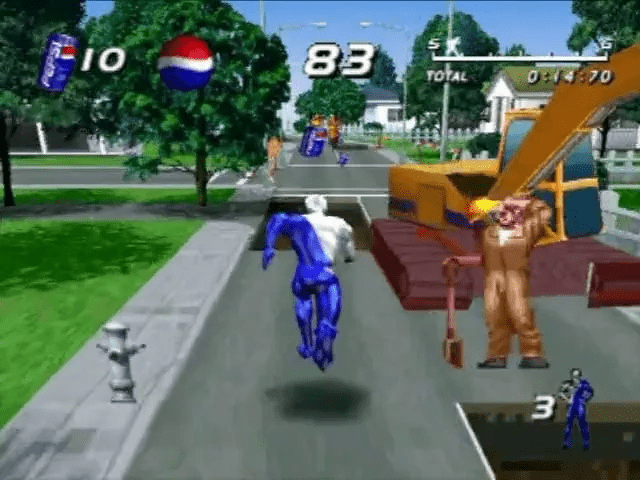 The weird world of ‘Pepsiman’

I’ve been taking advantage of the year of lockdown to revisit my PS1, and some of the fun games I used to play as a kid. I’ve re-explored classics like the Crash games, Spyro, PaRappa the Rapper… the list could go on. But it also gave me the chance to finally complete a game that I never beat as a kid, and explore truly how weird the whole experience is. That game is Pepsiman.

Gameplay-wise, Pepsiman is comparatively simple to grasp. It’s an on-rails runner akin to something like Temple Run – Pepsiman is always on the move, and the player must react to whatever comes their way. You’ve a simple move set – you can move from side to side, sprint, jump, and slide, and the objective is simply to make it to the end of the level before the timer runs out, or before you run out of lives. You add to your score, or you pick up extra lives, by picking up some of the 100 cans of Pepsi scattered around the level. There are occasionally gimmicks, like a bin on your head inverting the controls, but that’s largely it.

So far, so simple, right? Putting it that way makes it sound simple, but it’s anything but. The reason I never beat the game is that it’s really unforgiving. When you play these games, you’re ideally meant to react to things as they happen – you miss something once in Pepsiman, however, and it knocks the whole game out of sync. Obstacles continue at their own pace, meaning you often actually can’t pass them. This is turned up a notch in the second phase of the level, in which Pepsiman runs towards the screen, and you have no time to respond to obstacles you can’t even see – it’s like the boulder levels in Crash, but far harder. It quickly becomes a game about whether you can remember what’s coming, rather than having the skill to react.

And yet, despite it being a cruel game, I love how unabashedly weird the whole experience is. Obviously, this is clearly a branded product, and Pepsi is everywhere. During the late 90s, Pepsi aimed to compete with Coca-Cola by throwing out more slogans and stranger advertising, and Pepsiman was how they promoted the drink in Japan (check out some of the adverts – they’re seriously strange). He was really popular, and so it’s perhaps little surprise that a game based on his exploits was released in 1999. I obtained a copy that year, but five-year-old me had no idea what was going on, or who this lycra-clad figure with no face was.

It’s surreal and unfair, and really short…but I loved it

The messaging in this game is really mixed-purpose – Pepsiman goes to help people stuck on the roof of a burning building or people stranded in the desert, and then essentially every obstacle stopping him is Pepsi-based. There’s Pepsi advertising everywhere, yet clearly no one wants Pepsiman to actually complete his mission. In the first level, he restocks a vending machine in a position that looks like he’s peeing into it (yes, really), and then he takes a can of Pepsi for himself, despite the shortage he’s here to resolve. This is the lowest level of weirdness. If you beat one of the game’s four levels, you get a bonus treat (and I really do mean treat). A fat hillbilly appears in a video clip, drinking lots of Pepsi, eating junk food and speaking in broken English. This game was a Japanese exclusive, although highly imported after people learned how bizarre it was, and I wonder what Japanese people were meant to take away from this.

It’s surreal and unfair, and really short (it’s four levels, and it won’t take long to complete once you’ve got it figured out), but I loved it. Pepsiman is a game brimming with character. The graphics still have lots of charm despite their blockiness, and the Pepsiman theme song is genuinely really catchy (thank goodness, because you’ll be hearing a lot of it). I’m not going to claim that Pepsiman is a long-lost classic, because it’s not. But it’s a unique experience, and I know you’ll have a lot of fun if you get the chance to play it – crack open a can of Pepsi and turn your brain off. Just don’t try to figure it out along the way.