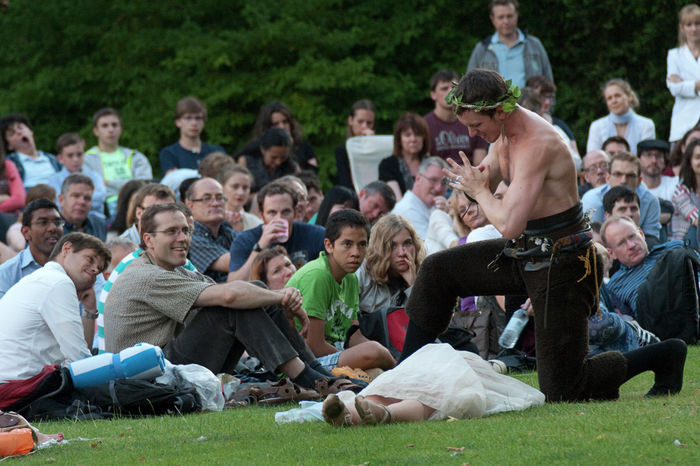 In my home city of Cambridge, the summer Shakespeare Festival is an annual part of the culture furniture. Every summer, individuals dressed in Elizabethan style dress position themselves around various shopping locations, handing out leaflets advertising numerous plays of the Bard. Given the weather, their iconic feature is being performed outside in college gardens (though how this accounts for summer showers I don’t know).

Naturally, this event was one of so many affected by the pandemic. Even though the plays would take place outside, in the summer where lockdown restrictions were slightly eased, it was impossible for them to go ahead. Yet, thanks to the vaccine rollout, this year’s summer festival should be able to continue. It is just one example of many that proves how willing individuals are to support the arts alongside the enduring power of the Bard’s words.

The situation looks very similar closer to campus. The Royal Shakespeare Company (RSC) are planning their own outdoor theatre in Stratford-upon-Avon’s Swan Gardens. Apparently known as the Lydia and Manfred Gorvy Garden Theatre, it will host a postponed production of The Comedy of Errors. Having the play outside is therefore both a prime example of the ingenuity of the theatre and also something likely to encourage more attendees who remain hesitant about the return to normality.

The play will run from Tuesday 13 July to Sunday 26 September and will be directed by Phillip Breen, while Max Jones heads the production. Alongside this, plays will broadcast online to ensure as many people can be reached as possible. In particular, Gregory Doran of the RSC will allow audiences to see the rehearsal process for Henry VI Part One, according to the Stratford Herald. This will most likely demonstrate the immense process that goes into ensuring a play is both a continuation of what Shakespeare crafted but can also be effectively adapted to modern day.

Indeed, the efforts that are taking place to ensure such theatre productions can occur highlight the long-term need individuals for art. During the lockdowns, many turned to watching Netflix or online theatre shows. Before the lockdown, visiting the local theatre or cinema was most likely a regular occurrence. Humans thrive and require culture as part of living a meaningful existence.

Before the lockdown, visiting the local theatre or cinema was most likely a regular occurrence. Humans thrive and require culture as part of living a meaningful existence

No wonder then, that its return has been so important. Despite being so vital in our lives, the financial impact of cancellations on theatres, actors and production staff has no doubt been immense. Some will have been able to get new, temporary jobs, perhaps working in a supermarket. For that, they should be commended. However, that is lost time to their careers and physical fitness.

The role of the government in assisting, where necessary, the arts is something that cannot be understated. While, of course, individuals will donate, offering their sums, that will most likely not be enough. It was the government who forced these institutions to close, after all, so providing a fair degree of adequate compensation is a necessity if these industries are going to survive after Covid.

The joy of Shakespeare is in no small part down to his coverage of universal themes that are present throughout of his plays. Whether it’s the betrayal and deception of Macbeth, the love and mischief in A Midsummer Night’s Dream or the difficulties of family connection in Hamlet, Shakespeare covers themes that affect the whole spectrum of humanity both 400 years ago and today. It is therefore no wonder that, while being reinterpreted, his plays continued to be read.

Despite being so vital in our lives, the financial impact of cancellations on theatres, actors and production staff has no doubt been immense

Similarly, one of the pleasant joys from outside performances is the spontaneity they offer. You never quite know who is going to turn up, even if the event is ticketed. The elements of the weather are always outside your control. Similarly, things like background noise from other events taking place nearby are out of your hands. In a sense, that is freeing.

No acoustics, however brilliant their quality, are therefore able to compensate from the natural world, whatever issues it throws up. The attention of theatre producers can therefore turn to the most important aspects – making sure any play performed is the highest quality possible. Outdoor theatres, wherever their location, are a welcome sign that the arts, and the genius of Shakespeare, are going nowhere.