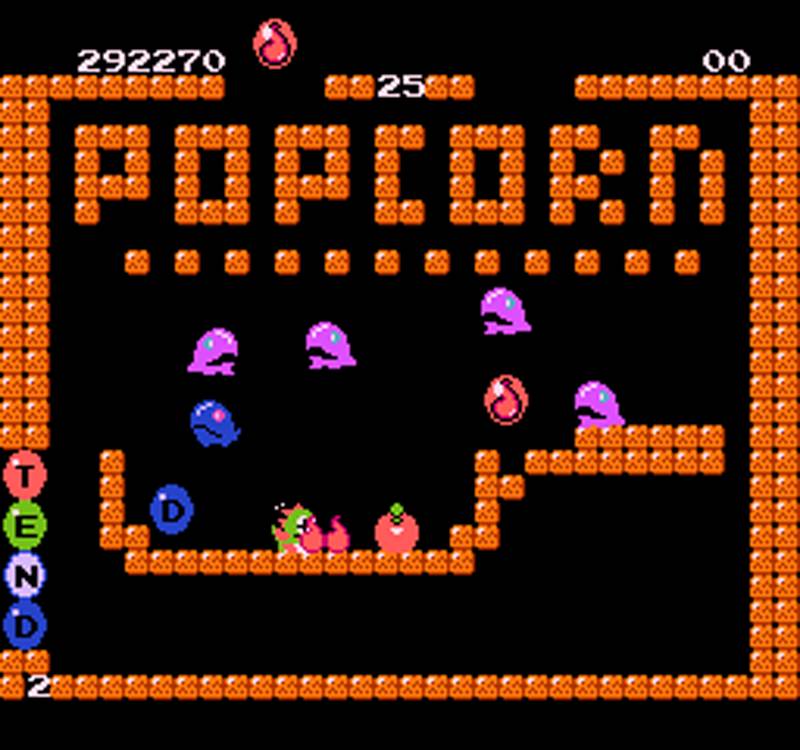 By Reece Goodall
May 13, 2021
Posted in Concept to Console, Games

For a long period, video games were perceived as a boy’s hobby – boys would play to the detriment of their relationships with girls. It’s a cringe-worthy thing to write, but that was the perception, and so one 1986 game sought to change that. One game was designed with the intention that it would be played by young men and their girlfriends – that game was Bubble Bobble.

Bubble Bobble was an arcade game developed by Taito. It was a co-op experience, which put you in control of one of two little boys that had been transformed into dragons (the game’s adorable main characters, Bub and Bob). They set out to save their girlfriends from the Cave of Monsters, fighting through the 100 levels with their ability to blow bubbles. Enemies can be trapped in bubbles and defeated when the bubbles are popped, leaving behind bonus items when they are defeated. It’s a simple and fun premise, and it’s an enjoyable game if you’ve never played it.

The idea for Bubble Bobble came from a developer called Fukio ‘MTJ’ Mitsuji, who joined Taito in 1986 because he thought their output was poor. He said: “Taito’s games then seemed kind of cheap and lame to me, both in terms of graphics and gameplay. They didn’t have much style or sense. Compared with Namco’s offerings, they were very much lagging behind.” He wanted to help turn the company around, and he turned down an opportunity to move to Namco because he felt there was more to do at Taito: “Because I felt Taito’s games weren’t up to snuff, it actually made me want to challenge myself and my abilities to see if I could change that.”

Some of Mitsuji’s early successes included the four-screen racing game Super Dead Heat, and the shooting game Halley’s Comet (inspired by the fact the actual comet would be passing Earth that year). But it was his next project that would be a runaway hit, and it stemmed from two inspirations. One was Mitsuji’s desire to make a “comical game”. The other came from his experience in Japanese ‘game centres’ in the 80s, watching boys play arcade games as their girlfriends stood to one side, waiting and bored. He waited to make a game that required co-op by making it fun and accessible.

Mitsuji describes where the bubble idea came from: “With Bubble Bobble, my first, most basic development concept was to make a game that girls could enjoy. OK then, if it’s girls we’re talking about, I thought, well, what kind of things do young girls like to draw and sketch? I actually made a list of over 100 different examples. From those, I drilled down and chose the ones that seemed like they’d catch people’s eye. The result of that process of elimination was bubbles!”

The other attraction for his imagined female audience was the two main characters, Bub and Bob. Mitsuji’s initial idea for the characters was robots with spikes on their heads, but he dismissed it for not looking “cool”. Instead, he created dinosaurs with ridges on their back, using four colours on a 16×16 pixel grid to create his leads. Co-operation was essential, as there were different endings depending on how well the two players worked as a team.

Bubble Bobble was intended to bring couples together in video arcades, but its legacy is far greater

Bubble Bobble was a phenomenon in the arcades, and it was ported to many home console systems including the Commodore 64, the NES and the Sega Master System. And, where successful games appeared, sequels almost inevitably follow. The next year, Taito released a sequel called Rainbow Islands, which used similar mechanics but also included a rainbow attack. In 1991, we saw Parasol Stars, where the player character is armed with a parasol. Both games were well received, but the choice to change the characters from the cute dinosaurs to their original human forms meant some of the charm disappeared. Its biggest spin-off success came with Puzzle Bobble, a 1994 tile-matching puzzle game whose gameplay was highly influential.

Taito never milked the likenesses of the two characters, as was common practice in the 80s and 90s, meaning Bub and Bob never hit the lofty heights of characters like Mario and Sonic. New Bubble Bobble games continue to be released to this day, with Bubble Bobble 4 Friends hitting the Switch last year, and its influence as one of the greatest video games of all time continues to filter through to more modern releases. Bubble Bobble was intended to bring couples together in video arcades, but its legacy is far greater.