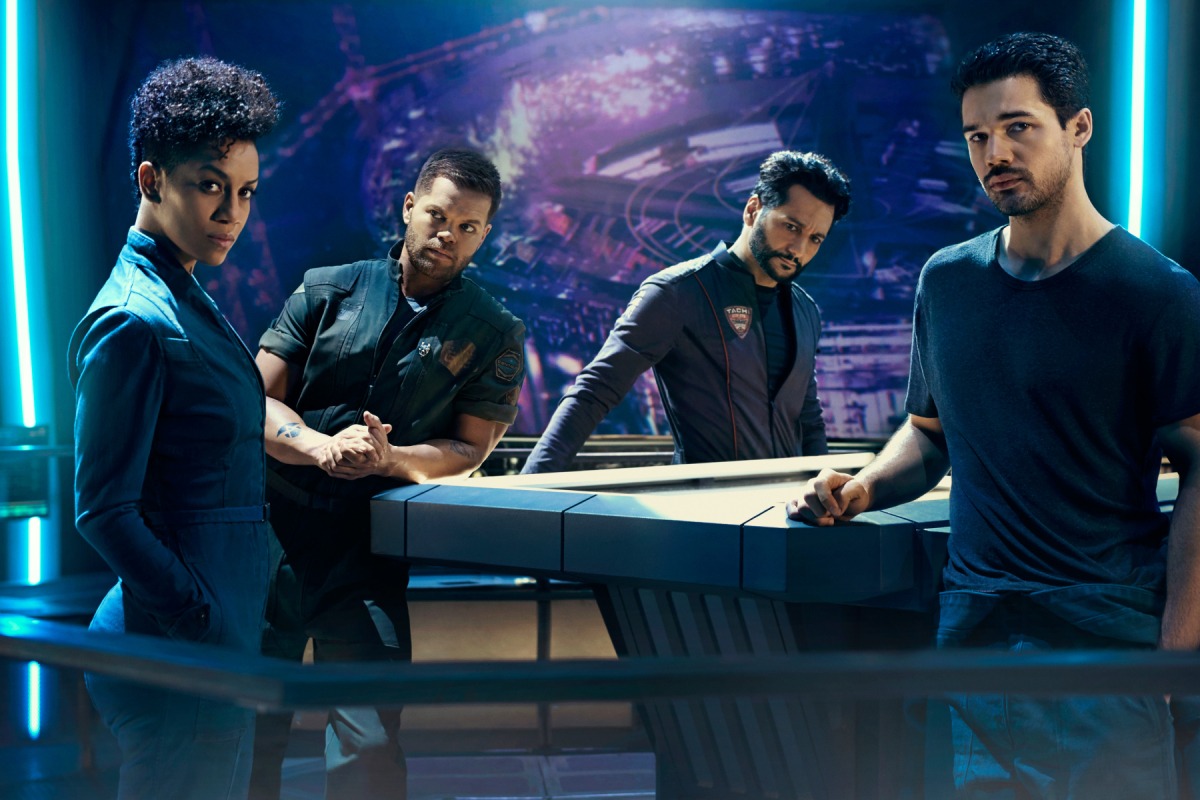 In 2018, when the Syfy network announced that the tv series The Expanse would be cancelled after season three, fans started a #SaveTheExpanse campaign on social media. They addressed a petition to Amazon and Netflix, asking them to buy the rights to the series and even crowdfunded a plane with a “Save The Expanse” banner that flew over Amazon headquarters. When Jeff Bezos, an avid watcher of the series himself, declared that Amazon would be continuing the series, this was seen as “one of fandom’s great triumphs”. So what’s behind this hype (besides a great publicity opportunity for Amazon), and why do many people believe this series is exceptional?

The Expanse, based on the book series of the same name by James S. A. Corey, is set a few hundred years from now, in our solar system, which is mostly colonized by that point. Countries no longer exist, but this doesn’t mean everything is rosy. In fact, there are three factions bitterly opposed to one another.

What’s lovable about this TV series is how it avoids common but unscientific sci-fi tropes such as gravity generators, sound in space, or space travel at the speed of light

On the one hand, there is Earth – once the cradle of humanity but now a superpower in decline facing mass unemployment and the consequences of climate change, and Mars – an emerging military power with the goal of making the planet habitable for humans, weak in numbers compared to Earth, but equipped with state-of-the-art technology. Meanwhile there is the asteroid belt orbiting the sun between Mars and Jupiter, which is exploited by Earth and Mars to gain valuable resources such as air and water. Its inhabitants, the so-called Belters, live on different dwarf planets and asteroids and are the new galactical proletariat. Since they are the descendants of immigrant workers from all around the world, they also have their very own language, Belter Creole, which is a lot of fun to listen to.

What’s lovable about this TV series is how it avoids common but unscientific sci-fi tropes such as gravity generators, sound in space, or space travel at the speed of light. The way in which basic physics limits humans and shapes their actions is one of the key themes in the show. For instance, the physique of Belters and Martians is very different from that of Earthers because they are born and raised in low gravity. Therefore, it is excruciatingly painful for Belters to be on their former home planet, whereas Martian Marines always train in artificial 1G (Earth’s gravity) in case they ever want to invade Earth. Perhaps some readers also remember that Perseverance’s landing on Mars wasn’t actually broadcast live, but with a few minutes delay due to the distance between Earth and Mars – this is exactly the problem that characters in The Expanse face, and so there are moments in the series when a lack of data brings the different parties to the brink of war, much like in a good old submarine thriller.

What emphasises the series’ brilliance is the fact that it wonderfully blends Bermuda Triangle with space opera, Cold War espionage thriller with film noir

This is linked to excellent worldbuilding with meticulous attention to detail, which makes watching the series aesthetically pleasing, and a very suitable piece of escapism in these Covid-19 times. The conversations that take place in Belter Creole aren’t subtitled, but since it is a mashup of English and other languages such as Chinese, Russian, Spanish or French, you always get the gist, and sometimes it’s even possible to catch a word and instantly understand what it means. It’s also fun to see that the characters in the story are very much aware of their common roots on Earth, as there are spaceships named ‘Scipio Africanus’, ‘Rocinante’ and ‘Scirocco’ – references to earthly history, literature, and climate respectively. In addition, the cast and characters of the series are very diverse in terms of race and sexuality. And while women were a bit underrepresented in Season one, this was fixed in Season two with the introduction of more female characters, some of which are nothing short of admirable. What emphasises the series’ brilliance is the fact that it wonderfully blends Bermuda Triangle with space opera, Cold War espionage thriller with film noir.

This, as well as the various layers to this series, is largely why it’s appealing to different audiences. There are simple pleasures such as successful gravity assist manoeuvres for fans of orbital mechanics, and Belter Creole for hobby linguists. But what makes this series the most interesting, even for those who aren’t into the usual action-packed sci-fi films and series, is its portrayal of international relations, as well as of neo-colonialism and the class conflict it entails. Economist and Nobel Prize winner Paul Krugman even devoted an instalment of his column in The New York Times to The Expanse, explaining his stance on the macroeconomics of season four, and The Washington Post called it “the best show about international relations on television right now”. Whatever your academic background or area of interest, it is likely that you will enjoy The Expanse.