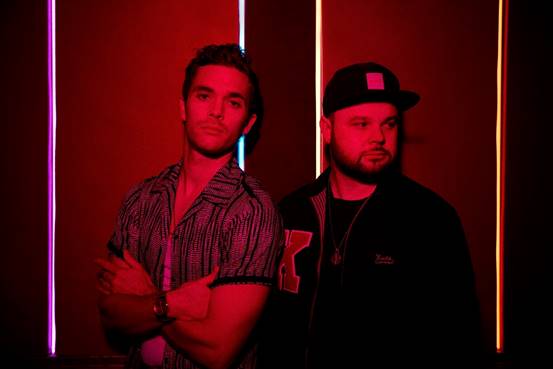 Change was due for Royal Blood, one way or another. After their second album, 2017’s How Did We Get So Dark? disappointed with a watered down take on the thrilling, powerful sound of 2014’s self titled debut, it only makes sense that the Brighton duo is refusing to tread the same path again. Album number three is a sonic revolution, with Mike Kerr’s dark, gritty bass-masquerading-as-guitar tones dyed colourful with the vibrance of pop and dance-rock. It sounds brave on paper, and sometimes it is, but other times, their experimentation ends up working against them to recreate the same mistakes made on this album’s predecessor.

Typhoons starts off on the right foot: lead single ‘Trouble’s Coming’ packs a delicious groove that satisfyingly brings together the past and future of Royal Blood’s sound, with their trademark guitar tone set to a drum beat that belongs more to the pop world than the rock world. The slick, punchy ‘Oblivion’ carries on the momentum in stylish fashion, before the irresistibly funky title track threatens to lift the listener off their feet and get their hips gyrating like nobody’s business. It’s when ‘Who Needs Friends’ arrives that the band’s winning streak dries up. It fails to fully blossom into the stomping, sexy rock track that its introduction suggests it could be, especially in its lagging chorus that lacks the oomph needed for it to really succeed.

The rest of the album delivers more mixed results, with equally as many successes as failures. ‘Limbo’ is the most overtly disco-inspired track on the record and is therefore the bravest, and Kerr and drummer Ben Thatcher clearly relish the challenge of creating a song that could bring a rock purist off the sofa and onto the dance floor. The crunch of guitar in the verses has no right to be as compatible with the shimmering disco of the chorus as it is, and the fact this works so well without feeling jarring is commendable. ‘Boilermaker’, meanwhile, buzzes with all the attack and drive that made Royal Blood’s self-titled album so remarkable, to the extent that it would not feel out of place if it was sandwiched between the likes of ‘Come On Over’ and ‘Little Monster’.

There appears to be one factor that determines the success or failure of an individual song: it’s the sense of attack

That said, Typhoons needs the presence of ‘Boilermaker’ far more than the self-titled record ever could, especially given the quality of the songs that precede and follow it. ‘Either You Want It’ feels like bland Radio 2 pop, both musically and lyrically (“Either you want it/Or you don’t/So come and get it/Or leave me alone,” is its chorus), suggesting that Royal Blood’s experimental phase is synonymously its commercial one. By the time the record ends, the formula begins to tire, with the steadfast rock of ‘Mad Visions’ and ‘Hold On’ lacking in new ideas and feeling a little thin instrumentally (and the former features a rather grating chorus.) The band does try and switch things up for closing track ‘All We Have Is Now’, but there’s only so much that can be accomplished with a song that can be written off as just another piano ballad.

If you step back and look at every track Royal Blood has released into the world, there appears to be one factor that determines the success or failure of an individual song: it’s the sense of attack. When this band throws themselves into what they’re doing, when they go hard and go powerful, it works. When they try to be modest, when they come across like they are restraining themselves, it doesn’t – it’s like pouring too much milk into a cup of tea. It’s why Royal Blood was so remarkable, and it’s why How Did We Get So Dark? was less so. If Royal Blood had embraced the potential to create something radical and bold with their new sound more, instead of something sanitised, Typhoons would not be anywhere as hit-and-miss as it is. There are treasures to be found here, and no song is necessarily “bad”, but sometimes bad songs get remembered – purely average songs, not so much.