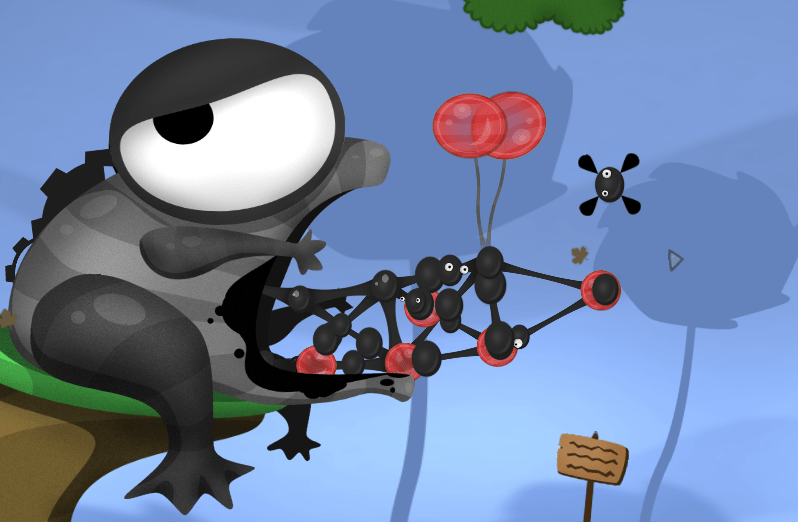 Good video game music stays with you – it helps make an adventure game feel like your adventure, adds a touch of horror or makes your puzzle games feel a little more quizzical. There’s lots of iconic music out there, but I want to talk about one that’s a little more obscure – the score to World of Goo.

The game, in case you’re unfamiliar, is a quirky little puzzler in which you use balls of goo to assemble structures – things like bridges or towers – with the objective of getting a certain number of goo balls to the pipe at the exit. It’s a physics-based game that is simple to understand – I first played it on the Wii years back, and it was very intuitive with the Wiimote. But the real challenge is in getting as many goo balls to the end as possible, and I spent hours trying to figure out how to refine my towers with one less goo, for example.

The score was written by Kyle Gabler, the game’s designer, artist and writer, and he speaks a little about the process on his website. He writes that “I wrote much of this music specifically for the game, but many of the tracks were excerpts from music I had written previously for various small projects, or just for fun” – in my opinion, the fact that they add up to such a cohesive whole is very impressive. He explains that much of the music is computer-generated, with a few live performances added for “a bit of warmth;” and that he was inspired by “big movie guys” including Danny Elfman, Vangelis, Bernard Herrmann and Ennio Morricone. With a pedigree like that, you probably want to hear my impressions of the music.

There are certain commonalities, from the computer orchestration to the use of choral effects… which keep the listener anchored in the World of Goo

The story of World of Goo takes you through different chapters in different places, from the outside to a wasteland aesthetic, then a corporation and the inside a computer, and the score evolves to reflect these locations. There’s a distinct sense of drama and definite Danny Elfman influences to the World of Goo Beginning, something that continues in The Goo Filled Hills. The soundtrack evolves into dramatic heroic marches (Brave Adventurers) and foreboding circus music (Another Mysterious Pipe Appeared), and opts for a jazzy bounce that fits the Regurgitation Pumping Station despite every sense it shouldn’t.

Even as the environments evolve and the aesthetic changes, the score feels cohesive. We shift from a polka track in Tumbler (with definite Beetlejuice vibes) to an eerie, almost mechanical piece in Screamer, but it never feels like too much of a shift. There are certain commonalities, from the computer orchestration to the use of choral effects (some of which, I believe, come from actual singers), which keep the listener anchored in the World of Goo.

The mark of a great soundtrack is not that it is necessarily the most elaborately orchestrated or the fanciest, but simply how well it suits the tone and the world of the game

It would be better to experience the game and the soundtrack for yourself, but I’ll pick out some highlights. Welcome to the Information Superhighway is a mysterious track, mixing a choral opening with electronic sounds in a way that is really effective. There’s something very dramatic about Years of Work, and Gabler delivers on his intention to produce something with a Morricone feel in Ode to the Bridge Builder. I also love the Ending music, which unites many of the game’s themes into something that feels both grand and fun at the same time.

I’m not going to claim that the World of Goo soundtrack is one that I frequently revisit, but it’s perfect in how well it suits the game, as evidenced by the fact I still recall so much of it years later. The mark of a great soundtrack is not that it is necessarily the most elaborately orchestrated or the fanciest, but simply how well it suits the tone and the world of the game. On those criteria, World of Goo is a great soundtrack – I recommend it, and played with the game it accompanies, it’ll sound even better.