Does Roger Federer’s Doha loss signal the end of an era?

After producing a 7-6(8), 3-6, 7-5 win over Dan Evans in the round of 16 of the Qatar ExxonMobil Open in Doha, Roger Federer failed to progress through to the semi-final after losing to Nikoloz Basilashvili in the quarterfinals.

This was the second straight three-set match Federer had faced in a week, after his nearly two-and-a-half-hour match against Evans. And after not playing in the 2021 Australian Open due to injury, this was the first time many fans had seen Federer on the court in a long time.

However, despite Federer’s strong performance throughout, it was Basilashvili who went on to win the match 3-6, 6-1, 7-5.

Federer converted the first break point of the match, winning him the fourth game of the first set. The Swiss managed to continue this lead to serve for a 6-3 set win. However, Basilashvili was strong in his returns and broke Federer early in the second set.

Basilashvili held a strong serve and claimed a second break point to clinch the second set win. Finding himself again in a similar position as he had been with Evans, Federer served for a break-point at 3-3. But it was Basilashvili who was able to hold out to take the match.

This victory secured Basilashvili his third consecutive tour match win for the first time since 2019. His triumphs over Taylor Fritz and Denis Shapovalov set him in good stead to beat the 39-year-old Swiss.

The Georgian player approached the match with constant power and aggression from the start and claimed victory in just one hour 50 minutes. In an on-court interview Basilashvili described “It is unbelievable. He is one of the greatest of all time… To just play him means so much to me. I am really happy that he came back and is playing again. To win against him is a dream come true for me. He was always my idol and I am sure he is to many tennis players and fans. He is an unbelievable player, so I am extremely happy.”

Federer also appeared happy with his return to the court, especially considering his recent encounters with injury, describing; ‘“I’m happy [with] how I played today. I’m happy [with] how I did yesterday…I’m happy I [am] back on the Tour. I’m pleased I came here to Doha. So, it’s really, really a positive return for me. I’m really happy.”.

Considering this was his first defeat since his loss against Djokovic in the semi-final of the 2020 Australian Open, Federer seemed openly very relaxed about his loss. But for commentators and fans alike, this loss has begun to raise questions of how much longer the Swiss will be gracing our courts.

Commentators, like Tim Henman, have described that ‘he’s not coming back just to be making up the numbers… He wants to be back competing to win the biggest and best tournaments. And that’s not going to get any easier as you get closer to your fortieth birthday. But he’s working incredibly hard, I’m sure’

The love of the game and his drive to win is clear, as this is the second time Federer has come back from knee surgery, after his return in 2017. This comeback though is especially important for the tennis community after the difficulties the sport has faced over the last year in the pandemic.

But the question still remains, that no matter how much love, drive, and passion one player has, could a series of frequent injuries and the growing dominance of younger players mean that we are entering into the final stages of the career of the arguably most naturally gifted tennis player to ever grace the sport? I think many fans would hope not, as they wish one of the most tightly fought GOAT races to continue indefinitely. 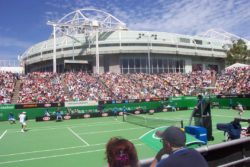 Australian Bushfires: Should the Australian Open be cancelled?

Ones to Watch: tennis should be ready for a year of shocks