Recently, I wrote about the Demon Slayer phenomenon and gave a handful of manga recommendations. Here are some series I would recommend to newcomers and first-time readers to get you into this medium.

I will first recommend Black Butler again. It follows the Earl Ciel Phantomhive and his butler Sebastian, who happens to be a demon. It’s set in Victorian England and its dark underworld. It is a masterpiece of storytelling and intrigue: the story arcs get progressively better, introducing new characters, concepts, and places within the current arc, while slow in publication, is fleshing out the history, background, and lore of the cast and world. It is the perfect choice for a newcomer to explore manga. It has also received a handful of anime seasons, OVAs, and a movie for those who are interested.

I can’t do a first-time recommendation without mentioning the magisterial Fullmetal Alchemist. It probably doesn’t even need much of an introduction. Hiromu Arakawa’s series is one of the best series, and one of the most popular. If you like general action, with a military and a supernatural element, then this series is for you. You will not regret reading this series or watching the faithful Fullmetal Alchemist: Brotherhood adaptation.

With the fifth anime season airing 27 March, now is the time to recommend this ongoing manga. If you like any form of superheroes, superpowers, action, and just good fun, then this is the series for you. Though don’t let the beginning saga fool you, it is not all happy-go-lucky and becomes a wonderful and darker tale in later arcs. The characters are quirky, making for a great gateway into manga.

The usual gateway manga (and anime) is Attack on Titan, and for good reason. If you like something a bit more serious and sometimes scary but packed with action and amazing worldbuilding, where anyone can end up dying, then this is the series for you. Also, who cannot love Levi? But, action is not everything: there is political intrigue, societal commentary, and one rather loud protagonist who evolves into such an interesting character towards the end. With the final season of the anime wrapping up, now would be a good time to read the manga.

The old gateway manga which had an anime adaptation a long time ago, Death Note is one of the most famous series to come out of Japan. Many people know of the ‘death note’ concept, a book where you can write a name and kill said person. A great mystery, supernatural, psychological battle series, it certainly deserves its position as one of the most popular manga of all time, and a great starting point for newcomers.

This series started as a webcomic, received a wonderful manga adaptation, and has a currently-airing anime series, which I also recommend. It is a lovely romance, comedy, slice of life series following Miyamuru and Hori. It is a deceptively simple premise and story which is so charmingly told and heart-warming. Highly recommended to anyone wanting a good romance manga to read.

Another romance-comedy, this series is just pure fun and I think anyone will enjoy this. This has received two anime seasons which I would also recommend as they manage to bring out the sheer madness of the manga in animated form. Two school geniuses, who obviously like each other but treat love as war, are each refusing to be the one to tell the other because they count that as losing and are terrified of the possibility of being wrong. It leads to some ridiculous and hilarious situations and mental battles. It is pure fun to watch two geniuses be absolute idiots.

If you like action, adventure, and an intricate power system alongside unique characters, dark undertones, intrigue, and a series where actions have consequences for the characters, then this is the series for you. Hunter x Hunter follows Gon’s journey to be a Hunter to find his father. Each character is unique and so are the villains. They are the standout of the series, Hisoka, Chrollo, Meruem, and the other chimera ants are some of the best villain characters in the medium. It is another series stuck in hiatus hell, but you have plenty to read, and the 2011 anime adaptation is also a masterpiece.

My final recommendation for newcomers to manga is Fruits Basket, a complete series with a novel premise. It is a heart-warming and entertaining series that anyone who wants to try a Shoujo, drama, or romance series should enjoy. It has recently been receiving a full anime adaptation, so if the older art style is not to your taste, the anime should still entice you as the story is great. Following the life of Tooru among the Souma family who take her in, the quirk of this series is that the Souma are cursed to turn into zodiac animals when hugged by the opposite gender. A simple premise causes many problems throughout the story.

I hope something intrigues you in this list of recommendations for newcomers, but if you aren’t too keen on the format, each of these series has anime adaptations, so if the story is good but you find the medium difficult do try out the anime instead. 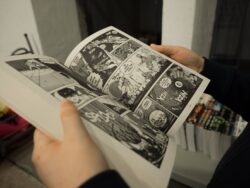 Books to put a spring in your step

Romantic reads for every Valentine’s need