Cambridge University students are to host Britain’s first “replatforming” event for speakers or academics who were previously deplatformed due to their views.

Students have organised a series of Zoom lectures for academics including feminist professors and researchers who have previously been “shut down”.

The speakers invited have been disinvited and ‘deplatformed’ from events after accusations of transphobia. They will give lectures online at the Replatforming Deplatformed Women conference.

The conference will include Oxford historian Professor Selina Todd, whose invitation to a feminist debate was rescinded in the past after pressure from trans activists. Jo Pheonix, a criminology professor, is also set to attend after her trans rights lecture at Essex University was cancelled amid protests.

Artist Rachel Ara is also set to speak at the conference, after her lecture at Oxford Brookes University was cancelled after students made claims she “shares transphobic discourse”.

Professor Kathleen Stock of Sussex University will also attend, along with Maya Forstater, a researcher who was sacked over tweets alleged to be transphobic.

The event will take place on Zoom each Tuesday from 16 March. Sophie Watson, a psychology finalist at Newnham College, and Pheobe Fuller, an English student, organised the event.

Rigorous debate is fundamental to the pursuit of academic excellence and the university will always be a place where freedom of speech is strongly encouraged.

Ms Watson said: “Being pro-free speech is actually a really controversial position for students to take these days.”

She is part of a feminist society, members of which have reportedly received rape and death threats for their defence and advocacy of women’s sex-based rights.

She said: “The best way to defend free speech is to exercise it… As soon as [students] deplatform someone, we replatform them. We have a lot of catching up to do; there are so many deplatformed women.”

Last autumn Cambridge dons rejected a new free-speech rule to “respect the diverse identities of others” which they deemed “authoritarian,” arguing that it could have the opposite effect of undermining academics’ freedom of speech instead of helping it.

The event comes as the government has announced a ‘free-speech champion’ in the wake of reported ‘deplatforming’ incidents.

Toby Young, co-founder of the Free Speech Union, said: “Over the last year there have been hundreds of examples of no-platforming on campus … These censorious campaigns are usually driven by a small group of activists.”

Cambridge University said: “Rigorous debate is fundamental to the pursuit of academic excellence and the university will always be a place where freedom of speech is strongly encouraged.” 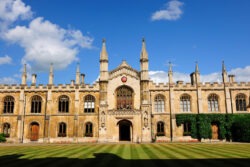