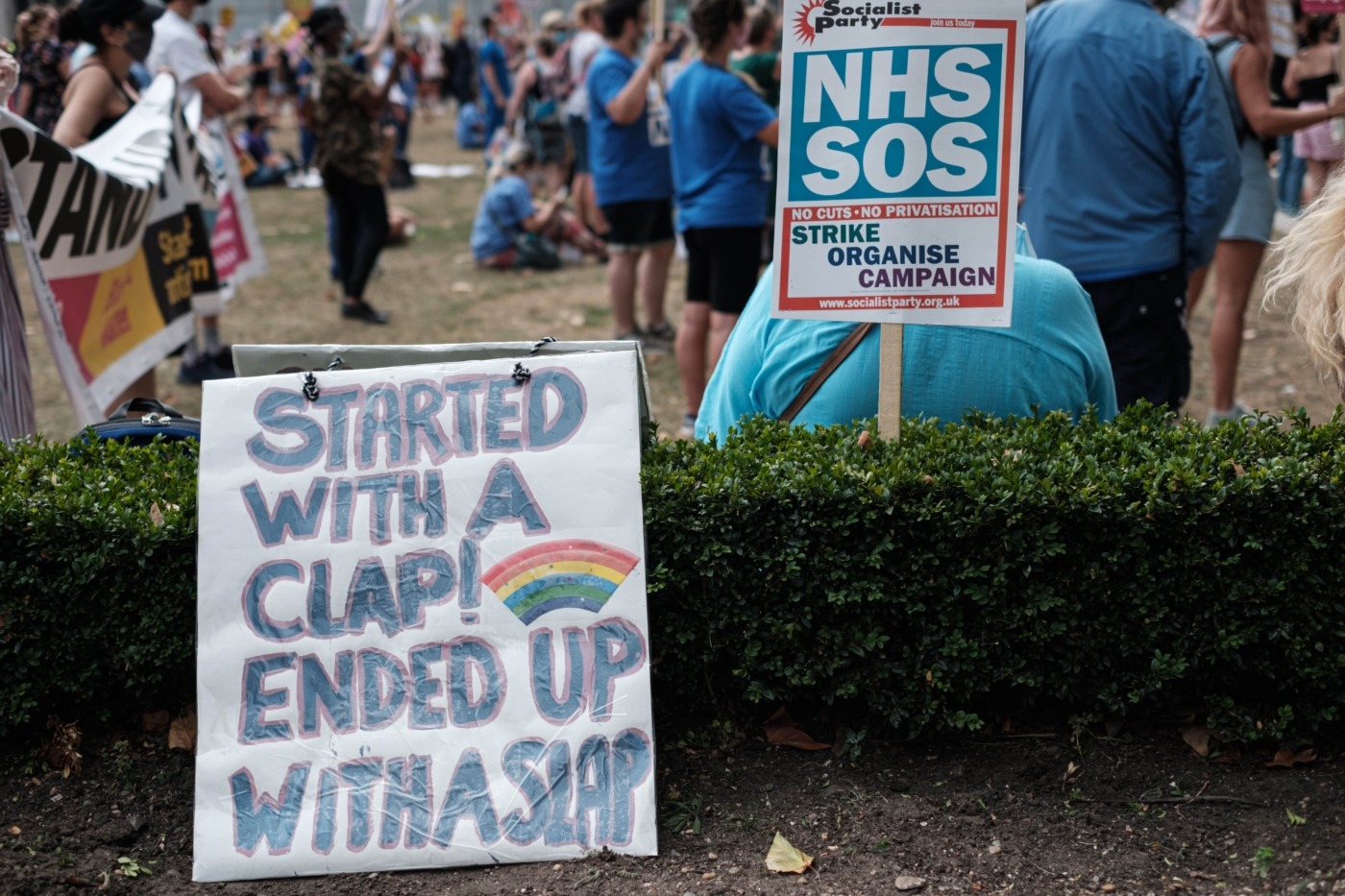 Why did the country stop clapping for the NHS?

The NHS staff have been on the frontlines of a global pandemic that has brought the country to its knees. During March of 2020, the UK seemed to be fuelled by the positivity that if we banded together we could tackle the virus. Whilst we sat at home, NHS staff worked long hours, back to back shifts in hospitals that were facing the full brunt of Covid-19. Risking their lives, the UK clapped at their doorsteps at 8pm every Thursday with key figures such as the Prime Minister, Boris Johnson and the Duke and Duchess of Cambridge joining in with their children from Anmer Hall in Norfolk.

As the weeks passed by, the sounds of support for the NHS became more distant and although we are now in another national lockdown there seem to be no clangs of pots and pans in the distance to be heard. The change in sentiment among the general public is louder than ever with the shut front doors and within the silence of our streets.

The disillusionment with the Thursday night clap was more apparent in the response received by Clap for Carers founder, Annemarie Plas, who tweeted that the tradition would make a return on Thursday however it would now be renamed as “Clap for Heroes”. Due to backlash on social media, she released a statement on Thursday afternoon stating that she had “no choice” but to distance herself from the tradition altogether as she did not intend to make a political statement and would not put “her loved ones at risk”. She stated further that the attitudes displayed by those attempting to “vilify” her were “destructive and counter-intuitive” and was destroying the positive purpose of the national applause.

Many NHS staff took to Twitter to state that they did not want to clap but for people to wear their masks, wash their hands and respect the lockdown

Even though the Clap for Careers was a “spontaneous idea” by Plas to show support for frontline workers, it may have been slightly tone-deaf to announce a renewal of the tradition at this point during the pandemic. Many NHS staff took to Twitter to state that they did not want to clap but for people to wear their masks, wash their hands and respect the lockdown. “Clap for Heroes”, or “Clap for Careers”, as it was previously known has been highlighted as appeasing guilt by many of the public and frontline workers with the Conservative Government continuing to delay NHS pay rises until summer of 2021.

Despite praise from the Conservative Government towards NHS staff, Health Secretary Matt Hancock has highlighted that “affordability” will be a determining factor on the amount in NHS staff wage increase. Additionally, he has stated in a letter to the NHS pay review body chair, Philippa Hird, that the wage increase must consider and reflect the economic circumstance of the country.

This is a far cry from the statements of Prime Minister Boris Johnson and Chancellor of the Exchequer Rishi Sunak. Both clapped and cheered at the doors of No.10 with the Prime Minister stating that they would keep supporting the NHS in any way they could and Sunak following that whatever the NHS needed they would receive. In hindsight, their promises to the public and NHS could now be seen as nothing more than empty gestures to subdue public criticism.

[A pay increase is essential for] nursing and other NHS staff, but for patients and the health service as a whole

The response of the Health Secretary and the Conservative Government has received much criticism from unions and the Labour Party over their delay to begin to the process of pay increases for NHS Staff workers until May of this year at the earliest. Royal College Nursing stated that a fair pay increase is essential for not only “nursing and other NHS staff, but for patients and the health service as a whole”. Equally there are many angered unions who have been insisting on the government to begin conversations for a “fair and early” rise in wages for all workers within the NHS since last summer.

The decision of delayed pay rise was met with dismay from Labour’s deputy leader, Angela Rayner, who also tweeted how much of a disgrace the delay in the pay rise was, highlighting that the government never presented delay in paying out Serco’s shareholders for a failed test and trace system and Matt Hancock’s ex pub landlord for testing kits.

Additionally, Rachel Harrison, GMB’s national officer, assailed Mr Hancock for sending the letter late on Friday in hopes that the public would be ambivalent. She stated that “the health’s secretary’s ‘Scrooge’ letter in the week before Christmas will leave NHS workers worried that they will not receive the fair pay rise next year that they were promised”. Furthermore, she declared that the NHS staff will be “rightly angry” due to government meddling with the process of the increased wages before any testimony was submitted.

Criticisms also came from the Head of Health at Unison, Sara Gorton. She also commented on the government’s decision to delay the review deadline of the report until May saying that it was cruel to force NHS staff to await a decision on their pay rises until next summer, calling on the Prime Minister to “do the right thing now” and finance a wage rise now to give weakened NHS staff a boost of morale that they so desperately need.

The call during this lockdown to clap for our heroes sadly falls short on the support they should be given by this country and the government. Westminster irrevocably damaged the NHS before the pandemic with multiple cuts to the service, blocks to the pay rise of nurses in 2017 and austerity promoted by the Conservative Government; these damages are no longer concealable during a global pandemic. The government has not only failed the public but most of all the NHS workers with their unsuccessful attempts at a tiered system to prioritise economic sustainment rather than human life.

NHS workers have been experiencing the trauma of this pandemic first-hand, watching an unnatural amount of people lose their lives made increasingly worse by policy decisions and disorganisation from the government. The suggestion that clapping our heroes is enough for our NHS staff after a pandemic that has lasted nearly a year can be seen as not only disrespectful but tone-deaf. They deserve increased funding from the government and a pay rise which should not be limited by “affordability”.

It is evident that the change in attitude towards ‘Clap for Carers’ from not only NHS workers but also the general public who feel that the moment has passed and that cheering with pots and pans outside our front doors is a waste of time.  There was a one-time resurrection of a clap to mark the death of Captain Sir Tom Moore, who raised £33 million for NHS charities, of Covid-19. However, a country once hopeful that this pandemic would come to an end in a matter of months cheerfully banging their pots and pans outside their doors are now seem hopeless.

Unfortunately, this reflects the climate we are currently in. Multiple false promises from the government failed tiered systems and lockdowns have led people to be restricted to their homes for the majority of the year, the loss of loved ones, job losses, financial worries and a huge mental health crisis. A country that was once told that the lockdown would be for three weeks is now nearly a year on, stuck in a third national lockdown and facing the worst of the pandemic, feel clapping is no longer enough.