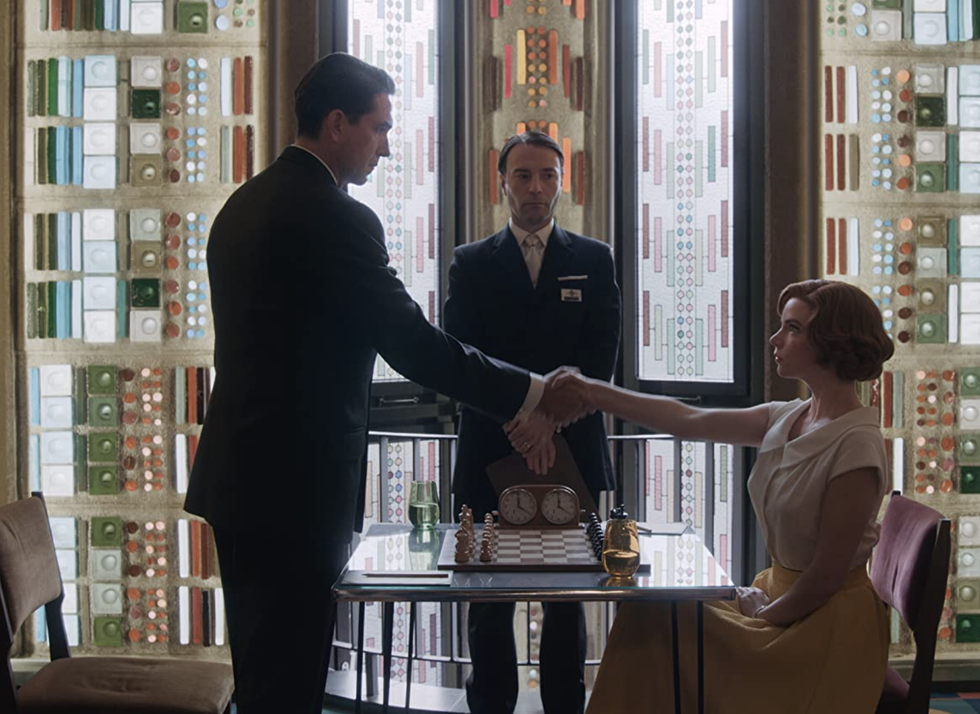 All sports fluctuate in popularity over time, particularly when certain teams or individuals have big wins such as Tiger Woods who started many people’s interest in golf. Now, in 2020, could it be chess that’s making a comeback in popularity?

Based on the 1983 novel of the same name, The Queen’s Gambit is a seven-part limited Netflix series that follows Elizabeth Harmon, a young girl who begins a chess career in the basement of an orphanage in Kentucky, learning the basics of the game as she plays against the kind janitor, Mr Shaibel. From there, Beth rapidly goes on to greater things, helped along the way by various friends and foes who bring out both the best and the worst in her.

How then has this story of a young girl and her passion for chess become so popular? In the most basic viewing, it’s the typical narrative of a sports underdog with all odds against Beth from the very start. We’ve seen this storyline before countless times, so what is it exactly that makes this different? How has chess – which is dubbed ‘boring’ to watch by many – managed to capture the attention of so many?

Three months ago if you’d asked the general public whether a show about chess could bring in millions of viewers and break Netflix records, chances are most wouldn’t have believed you. Despite this, The Queen’s Gambit beat all expectations and broke Netflix’s record for most streams of a limited series in its first 28 days, with 62 million accounts watching this show in its first month. Even now, it remains in the top 10 most viewed shows daily on the platform.

Even more interesting is just how widespread the interest of the series has been. Websites have reported huge surges in chess set sales. EBay stated that within the first ten days of the series being released, it saw an impressive 273% rise in sales of chess sets. It seems clear that there’s a large number of people who want to channel their inner Beth Harmon – or their inner Benny Watts – and get better at the game. Popular chess websites, such as chess.com, have reported a considerable growth in use of their sites since the release of the show, in fact in November alone chess.com reported that a record for new signups to the website was broken almost daily.

This is partly because The Queen’s Gambit makes chess fun. The whole time you’re watching you’re filled with nerves, as you keep your fingers crossed for Beth to win against increasingly skilled opponents. Fast paced chess montages mixed with a great soundtrack ensure that the games don’t drag, and that even the inexperienced player – such as myself – can sense the high tension of the game with everything that’s at stake. Not only is the cinematography exceptional, but the brilliant and convincing acting makes it impossible not to root for the characters. Chess is the sport that links the various elements of the plot together, and the subplots help the most casual viewers stay interested, with romance even being brought into the mix. Regardless, with almost everything based around chess competitions taking place in extravagant cities and hotels around the world, it’s hard for viewers not to get invested in the chess side of things too.

Among other things, the release of The Queen’s Gambit has seen a rise in female participation in the sport, and hopefully this positive trend will continue

There’s also added value in a series that follows a woman boldly navigating herself in what’s expressed evidently in the show as being a man’s world. Initially, it’s made clear that others are only interested in her story because she’s a girl, but as she proves her talent time and time again her opponents start to see that she’s more formidable than they could ever have imagined. Chess.com says that the World Chess Federation lists 1,721 grandmasters worldwide, however only around sixty of them are women. Among other things, the release of The Queen’s Gambit has seen a rise in female participation in the sport, and hopefully this positive trend will continue.

I’ve found myself asking my dad to play a chess game or two with me, excited by a game that I’d not given a second thought to before. There’s a certain satisfaction in seeing a move that before you would’ve missed completely, in seeing yourself improve and start to understand the game more. If you have access to a chess set, I couldn’t recommend giving the game a go more. In no time, you’ll probably find yourself trying to learn openings and looking for checkmate, as the intricate layers of the game start to slowly reveal themselves to you. Then, once you feel the thrill of winning once, you too, like Beth and Benny, might find yourself asking the simple question: again?