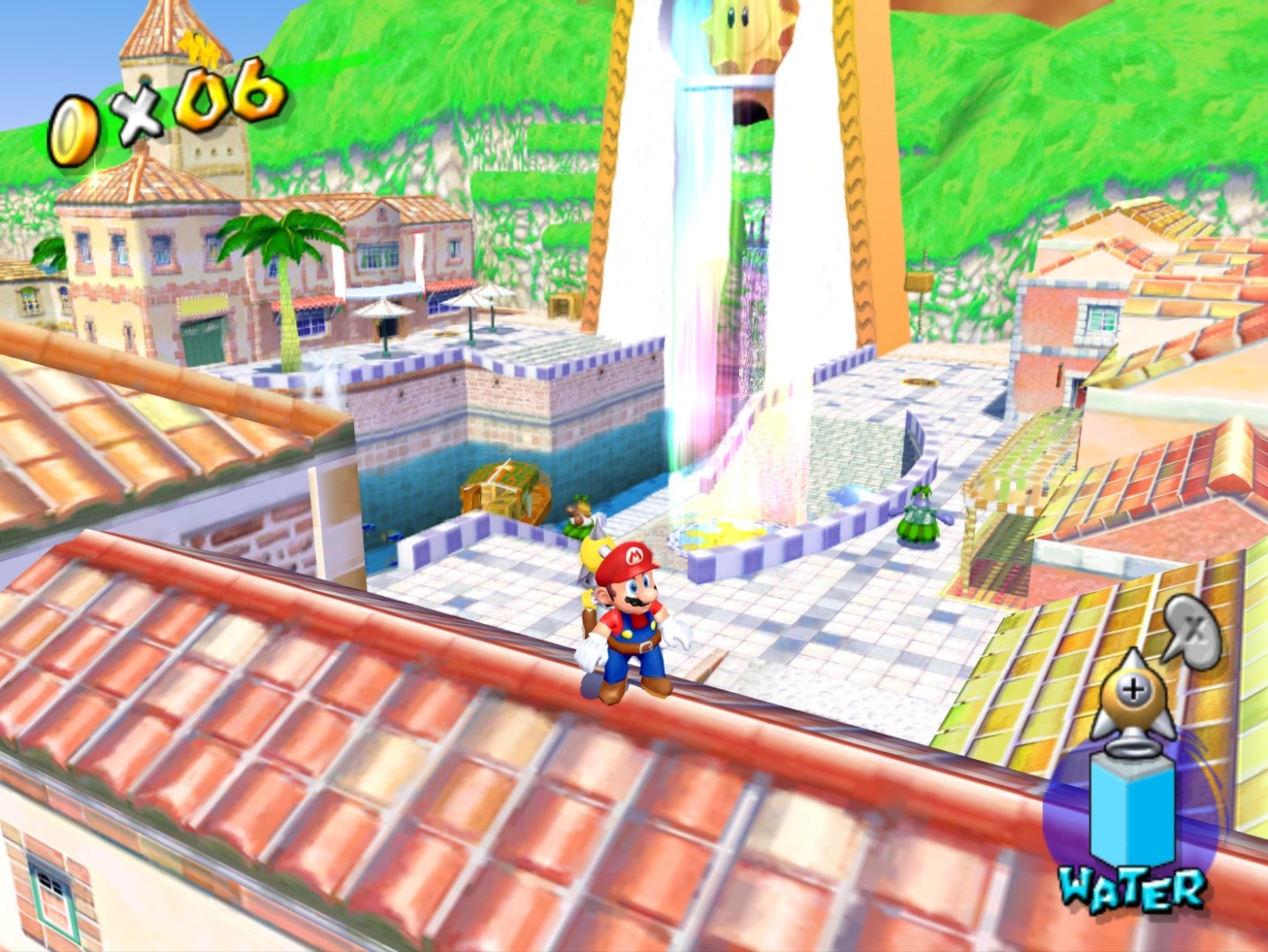 Super Mario Sunshine has long been known as the black sheep of the Mario family – it was maligned by many for being too different, and those expecting a similar follow-up to Mario 64 were surprised. Here’s a look at the creation of the strangest entry in the Mario canon, whose legacy since its 2002 release has been subject to much deliberation.

The idea of a sequel to Mario 64 had been floated ever since its release. Shigeru Miyamoto, one of Sunshine’s producers, revealed two of these ideas in a 2006 interview with IGN – Super Mario 64 2 was supposedly being made for the Nintendo 64DD, and would have featured Luigi as a playable character, while a GameCube video demo known as Mario 128 was also floated as a successor. The latter title would later be a major influence on Super Mario Galaxy.

Sunshine’s most obvious difference to other Mario titles is the inclusion of F.L.U.D.D., a water pack that sits on Mario’s back, enabling him to clean the goo that covers Isle Delfino and expands his range of movement. When the game’s director Yoshiaki Koizumi first got his hands on the new GameCube controller, the sense of resistance he encountered when pressing the sensitive analogue trigger made him think of playing with water pistols, and that’s where the idea came from.

Koizumi was under pressure to deliver – Nintendo hoped to have the game ready within a year of the GameCube’s launch, which meant a release in Summer 2002

As Koizumi described: “From the very beginning, I let him have a water pistol. This is where I started. Then, I built upon that to imagine why Mario might have a water pistol; what kind of actions he would have.” The idea of equipping Mario with a tool (and particularly one that resembled a gun) faced some internal resistance, and an early way around this was using a man-type character to spray water, but he eventually convinced Nintendo to let him direct the next game in the Mario franchise.

In contrast to Mario 64, the development for Sunshine has flipped: the idea for a setting and the characters which populated it influenced the designs and gameplay, rather than Mario’s movements and interactions shaping the way the game played out. This was a new and radical approach to creating a Mario game, and the end result was quite different.

The idea of a water gun and the planned summer release date led to a tropical setting – Koizumi dreamed up an island in the shape of a dolphin called Isle Delfino, a nod to Project Dolphin, the GameCube’s internal codename. He also fashioned a clay model of the island to use as inspiration, which was based on Amalfi Bay in Italy. The development team flew to France and Italy in order to get a sense of this world. An initial idea to fill the resort with humans was cut off early, and 3D character designer Satomi Asakawa was approached to create weird colourful characters instead – she designed the Piantas, largely due to a fondness for chubby cartoonish figures.

Koizumi was under pressure to deliver – Nintendo hoped to have the game ready within a year of the GameCube’s launch, which meant a release in Summer 2002. The game was only in development for around one and a half years, suffering heavily from time constraints – something Miyamoto admitted to in a 2003 interview. It still feels like a cohesive experience due to Koizumi’s focus on the F.L.U.D.D. mechanics and the developers were keen that Isle Delfino could be another hub world for players to explore and get a sense of Mario and his movement – but there’s a feeling that Koizumi’s ambitions may have outstripped the time on offer. Miyamoto said: “In each Mario game, players sometimes move around without any specific purpose, yet they may find some secret as a result. While wandering around, players get accustomed to the gameplay so that Mario moves just as they want him to. Then gamers feel some attachment to the game and don’t want to sell it to used-software shops. So, the more you play, the more attachment you feel.”

The game was met with critical acclaim on release, with reviewers praising the graphics, soundtracks, and the use of the F.L.U.D.D. as a platforming mechanic. GamePro gave it a perfect score, stating it was “a masterpiece of superior game design, infinite gameplay variety, creativity, and life”, and Game Informer described it as “the best Mario game to date”. This praise was not unanimous, however, with GameSpot’s Jeff Gerstmann calling F.L.U.D.D. and Yoshi “mere gimmicks”, and complaining about the camera. He was one of the many critics to pick up on the fact the game was rushed.

By 2006, the game had sold over five million copies worldwide, making it the third best-selling GameCube game (toppled only by another outing for the plumber, Mario Kart: Double Dash, and Super Smash Bros. Melee). It sold more than 400,000 copies in Japan within four days, and shifted a similar number of units in the USA within ten days of its release, significantly boosting sales of the GameCube as a result. It failed to live up to Mario 64’s sales, but the game was owned by approximately a quarter of the GameCube’s 22 million worldwide owners.

The true impact of Super Mario Sunshine is twofold. It introduced a number of elements and characters which would become Mario staples, including Petey Piranha, Bowser Jr. and the Shine Sprites, and it was the first 3D game that allowed Mario to ride Yoshi. In a later interview, late Nintendo president Satoru Iwata stated that the game didn’t do as well as the company had hoped, but saw its failings as part of a path that led to Mario Galaxy and, most recently, Super Mario Odyssey.

In the final article in this series, we’ll see Mario voyage into outer space with a look at the creation of Super Mario Galaxy, a certified classic that captured a whole new audience of Mario fans.