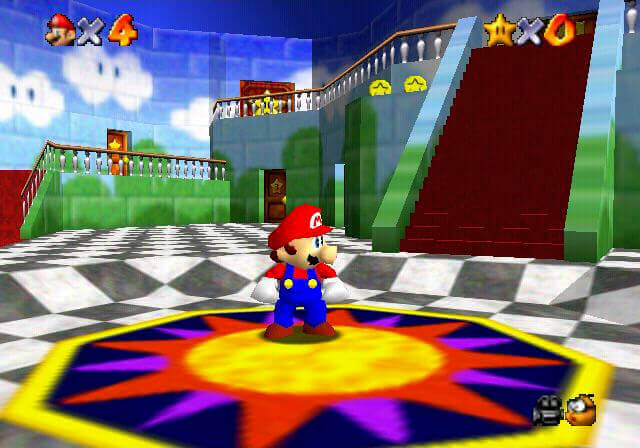 Concept to Console: a history of ‘Super Mario 64’

Super Mario 64 is one of the most influential games of all time, but bringing the plumber into 3D was a challenging and unprecedented process at the time. Here’s a look into how this 1996 Mario classic was created.

In the early 1990s, Shigeru Miyamoto conceived the idea of a 3D Mario game while developing the SNES game Star Fox. The initial plan was to use the Super FX chip to create a SNES video game with gameplay based on “an entire world in miniature, like miniature trains”. He eventually reformulated the idea for the Nintendo 64, simply because the latter controller had more buttons for gameplay and presented an analogue stick to enable fluid turning. One of the original concepts involved a fixed path and an isometric-type game akin to 1996’s Super Mario RPG.

The early focus was on Mario’s movement. Miyamoto describes that the team initially developed a program on a powerful computer: “There was a room made of simple Lego-like blocks, and Mario and Luigi could run around in there, climb slopes, jump around, etc. We were trying to get the controls right with an analogue 3D stick, and once that felt smooth, we knew we were halfway there.”

One of the things Mario could do in this space was chase a rabbit (nicknamed MIPS after the N64’s CPU), a feature that eventually made it into the game. Movement was key – Miyamoto told his designers to create as many different movements as possible, leading to nearly 250 animation patterns (of which 193 were used). After doing a lot of calculations, the developers created a Mario with a sense of physics to his movements.

Miyamoto describes the difference between movement in 2D and 3D games in terms of it being in the latter case more intuitive and less quantitative. Giving the example of jumping, he said: “In the Mario games up to now, we’ve carefully crafted every stage and level down to the individual pixel. In earlier Mario games, we were able to measure the number of pixels Mario could jump and know exactly what was possible. But this time, we had to design the levels so that as long as your jump was ‘close enough’, you’d make it.” With Mario’s movement sorted, the developers had to start creating the rules of 3D platforming – one example was the choice to place the camera behind Mario, and have it be handled by a Lakitu you could actually catch a glimpse of in the mirror hall.

The level maps were constructed by referring to concept art sketches and brief notes, which enabled course director Yoichi Yamada to begin designing the stages. As Miyamoto explains: “It was kind of like sculpting a diorama out of clay. First you make a very general shape. For example, with the King Bob-omb’s stage, for our initial, general design, we’d have that river in the middle of the map, which you cross to reach the boss area, which is atop a big hill that you have to wind round and round as you ascend it. But say we put Mario on that map, and move him around, we realize the river flows too fast and it sweeps him away (laughs), and that’s too hard for players, so we swap that river out for a desert valley, like Death Valley. So the form remains the same, but we gradually add more and more ideas, changing the map as we go.”

Miyamoto described how the entire purpose of the game was to encourage players to explore. He said: “Truth be told, we did something with Mario 64 that we don’t usually do: we had children playtest it. We had a row of about 10 middle schoolers, and had them play around on the King Bob-omb’s stage for half a day, while we observed from behind. My child was one of them, actually… but seeing him try dozens of times, over and over, to get up this unclimbable hill, as a parent I couldn’t help but think, ‘Geez, does this kid have any brains?’ Afterwards we asked the children what they thought of the game, and they said it was fun, and that they wanted to play it again.

“Up to now, I think there’s been this image with games that if you can’t beat it, it’s not a fun or good game, right? That’s a philosophy we’ve stuck to at Nintendo, too, but I figured that if a game was this fun to play even if you weren’t getting anywhere, well, it must be alright. Until this game, I was very sceptical about something like this being fun. We thought that half the people would just go straight into the castle, and half would hang out and explore outside, as you described. We made the game with that latter half of players in mind. I’m not saying that either way is ‘correct’, of course.”

Super Mario 64 received critical acclaim, and it was the best-selling game on the Nintendo 64. Critics and audiences loved the design and the way it brought Mario into 3D, with a Maximum review stating: “The old 2D platform genre is essentially dead with the arrival of this game. The limitations inherent with the genre have been swept away in the wake of Mario 64.” Next Generation ranked it number one on their ‘Top 100 Games of All Time’ in the same issue in which they reviewed it, calling it “the new high-water mark of both gameplay and graphic sophistication”. IGN ranked it fifth on a list of the greatest games of all time, and it was the first game to ever receive a perfect score from the gaming magazine Edge.

The game’s positive reception meant it contributed to the N64’s initial success – after all, it was a launch game – and, at a time when consoles were launched with a variety of games, it was a point of interest in itself. Its importance still stands as one of the major ancestors of the 3D platformer.

It wasn’t the first, but it defined the 3D platform experience – the freedom to explore, the non-linearity, the hub world and the idea of a game with a variety of missions all truly emerged here

Speaking about the N64, Dan Houser, a prominent figure in the development of the Grand Theft Auto series, said: “Anyone who makes 3D games who says they’ve not borrowed something from Mario or Zelda is lying.”

Super Mario 64 saw an enhanced remake published for the DS in 2004, again as a launch title, but this time for the DS. The core experience was retained, but a number of well-received changes were made. Yoshi, Luigi and Wario were all added as playable characters, and a series of new areas, enemies, and Power Stars were included. It featured a multiplayer mode, and there was an extra mode featuring touchscreen minigames. It sold more than 11 million units, and IGN called it a “great achievement” that showcased the DS’ power.

In May 2011, the game was selected as part of a Smithsonian American Art Museum exhibit about the Art of Video Games, a testament to its cultural importance. It reshaped 3D gaming, and it would prove a very hard act to follow. In my next article, I’ll explore the creation of the next 3D Mario platformer, Super Mario Sunshine.