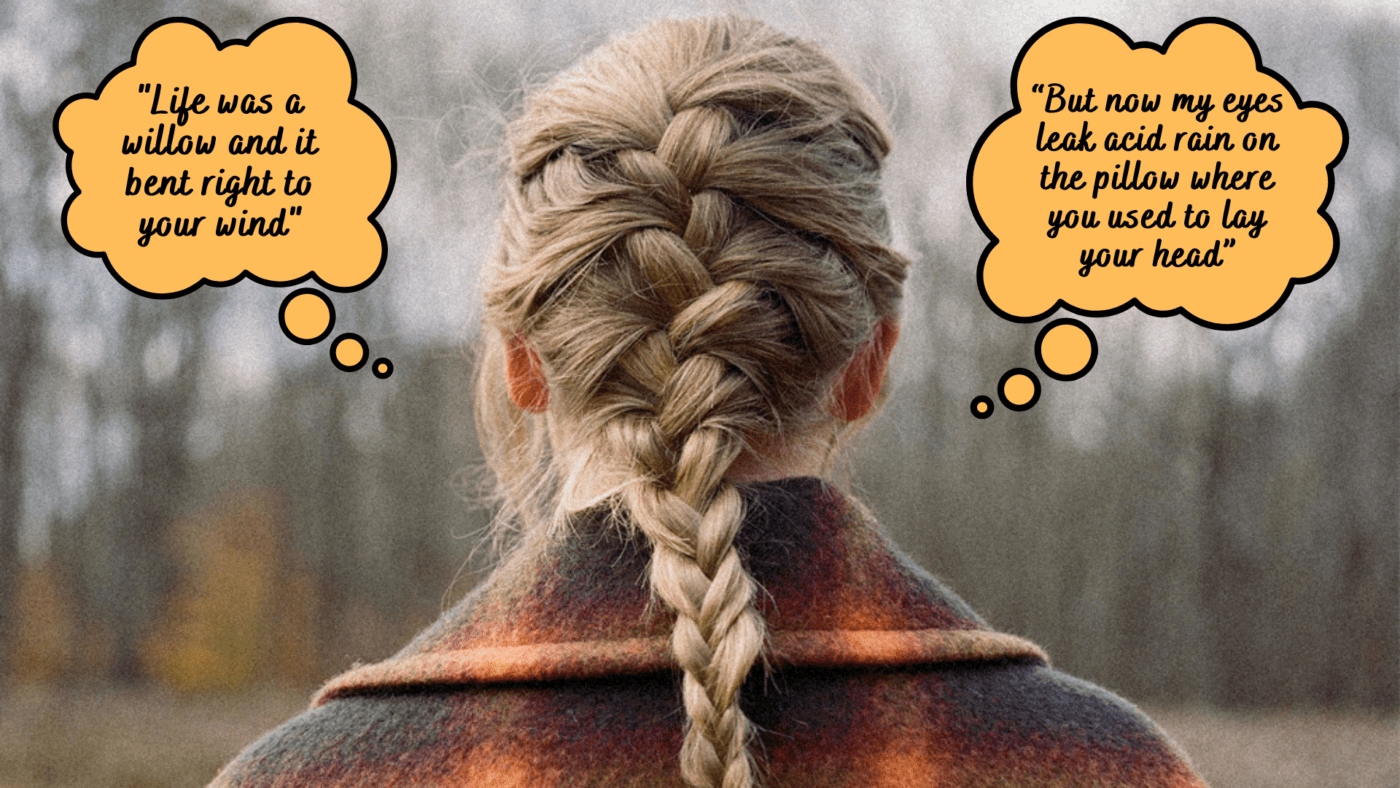 After this year of doubt, confusion, celebrity demise and political intrigues, Taylor’s lyrics carry a certain therapeutic quality; ‘willow’ seems to pay homage to the reassurance of dreams, when reality can drive us a little mad. There is a mythical charm to Taylor’s opening track, and a sense of being led further and further down the rabbit hole, deeper into the heart of her song-writing story world: “The more that you say, the less I know / Wherever you stray, I follow”.

‘gold rush’ – “My mind turns your life into folklore”

There is an unapologetic, dreamy quality of wish-fulfilment to ‘gold rush’, held firmly in place by the demanding hand of realism: “At dinner parties / I call you out on your contrarian shit”. The Pope called doubt key to the life of faith. Swift’s dreamlike vision of Joe Alwyn is only plausible and possible given the self-realism which permeates the very edges of her dream-world: “Eyes like sinking ships / On waters so inviting / I almost jump in”.

‘tolerate it’ – “While you were out building other worlds, where was I?”

For anyone who has liked someone more than they can tolerate, these lyrics strike a particularly bitter and elegant chord. I’ve always admired Taylor’s lyrical ability to explode minor misery into metaphysical, giants in the sky: mythical battle-like text fights which belong on some Ancient Greek Tapestry. Men who are afraid of Taylor Swift often criticise her for projecting her issues onto her 10 ex-boyfriends, but Taylor is always first to blame herself (“blankets over my barbed wire”). What is found in her new lyrics is her facing up to her own feelings of insignificance, and her greatness as a songwriter.

The explosion of climate change and heartbreak in one simple line is no accident. Perhaps, in order to understand the world, Taylor must first turn away; her lyrical escape into evermore paradoxically marks a growing awareness of the cultural climate, darkness and how love will out-survive us.

‘coney island’ – “Will you forgive my soul / When you’re too wise to trust me and too old to care?”

Perhaps it’s hard to fully grasp these lyrics as someone who is not yet old but, yet again, Taylor Swift pulls philosophical wisdom out of her bag of tricks and charms. Ageing slowly sets its roots into Taylor’s song-writing; at the age of 31 my feeling is that Taylor must turn herself into a lyrical martyr or fear extinction. She is now face to face with a new invisible enemy: ageing.

‘ivy’ – “Stop you putting roots in my dreamland / My house of stone, your ivy grows / And now I’m covered in you”

In our 21st century information age drenched in technology and paranoia, the notion of the road not taken, of stones, ivy and roots, one free from the cruelties of the modern world, becomes rather nice. She seems like Little Red Riding Hood trying to outrun the big bad wolf of fame, pressure and the cynical music industry. evermore is a lyrical woodland of Taylor’s own, almost childlike slumber. We cannot help but feel covered by her song-writing ivy, comfortably lost in her evermore dreamland.

Taylor’s ability to transform her English actor beau into a so-called mythical thing is proved once again in the reference to the gardens of Babylon hanging from her lips (there’s a DreamWorks animation lyric video waiting to happen).  Taylor is a genius at reducing her boyfriends to cultural tales; her imagery of cowboy boots under her bed, recalls a romantic subplot from a Western. With “Forever is the sweetest con”, Taylor quite literally dances a narrative tightrope of wisdom and ignorance: what we think we know, and what we must learn over and over, as Taylor says, “evermore”.

Sometimes it’s nice to hear wise song lyrics that are destined to become Instagram captions. Taylor taught me about being a girl long before life did: kindness is almost a pre-scripted virtue, robotically coded into female gender, but often kindness can be taken advantage of. This wisdom is the kind I shall probably forget then remember to relearn and forget over and over again. It’s hard not to feel slightly mothered by this song. The aphoristic/paradoxical Oprah Winfrey sentimentality, followed later by the “power” and “polite” juxtaposition, calls to mind Taylor’s awareness of the vulnerability of being human in a world of judgment and profound emotional poverty. How kind can we be in a world where it is hard to trust?

‘long story short’ – “And my waves meet your shore / Ever and evermore / … If the shoe fits, walk in it”

Taylor’s love of the elements of style, story, and the principles of imagination are almost always taken for granted. Early on she sung Romeo and Juliet pop ballads such as ‘Love Story’ and ‘Story of Us’.  But now, with ‘long story short’, maturity has aged her writing, made it better, and she emerges with an incorrigible optimism, and an almost childlike tell-it-how-it-is mentality. Gone are the days of songs which play like 3-hour long Hollywood movie romance movies. Her skin of melodrama shed; she is now straightforward in the most charming way possible: “If the shoe fits walk in it”. Taylor is great pals with Paul McCartney, and as the Beatles proved from Sergeant Pepper onwards, it is only the true masters who have the wisdom to not always be entirely serious in their song-writing. Taylor seems to be entering the ‘I Am the Walrus’ phase of her musical existence.

Perhaps Taylor’s success lies in her ability to escape the prison of stereotypes. Over the years she has evolved from victim, princess and prisoner, to martyr, menace, myth and, finally after all these years, she has finally become a woman. Her medieval song quality captures not only her determination the same way we turn successful women into enemies, but the strength demanded to remain vulnerable when the world is hard. Her lyrics used to be a combination of parody, metanarratives and toxic self-awareness, but now it feels, at 31 years old, Taylor has finally returned home. For Taylor, the lyrics demonstrate an awareness of life’s absurdities and tragic disposition but, more than anything, the fact that life is supposed to viewed as a kind of dream, and that evermore is not such a bad place to be after all.