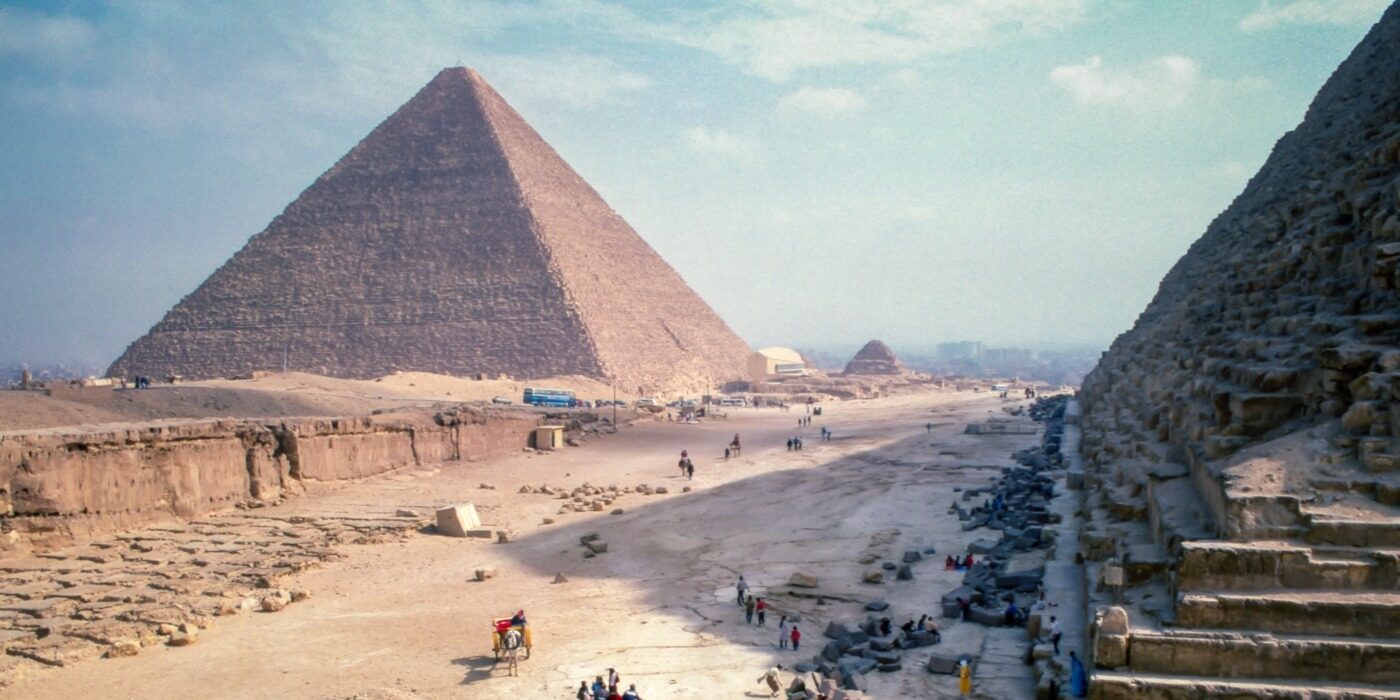 If you’ve seen films like The Mummy, you may be somewhat familiar with the Victorian interest in Egypt. And yet, a set of astounding vintage photographs showing tightly-laced Victorians posing next to Egyptian monuments feel almost unbelievable. There’s something incredible about seeing two incredibly different cultures mix like this. So what did the Victorians do in Egypt, and why was it one of their destinations of choice for a holiday?

During the Victorian era, the great monuments of Egypt, (the pyramids, the Sphinx, the underground tombs), were nowhere near as protected as they are now. Visitors would climb the pyramids to have their pictures taken and enjoy a catered lunch in tombs. The shade of the temple’s interiors offered the perfect place for a midday nap. There are also reports of professional photographers climbing to the top of the pyramids to take the very best photos they could.

However, their experience of travel was somewhat hampered by the strict rules of fashion and etiquette of the time. The men were forced to tour in full three-piece suits, while the women wore several layers of petticoats, tightly-laced corsets, heavy stockings and high-topped shoes, as well as heavy hats decorated with flowers and ribbons. Many of these clothes were made in dark colours, which increased absorption of heat from the desert sun, and they dared not shed any layers because it would have been considered scandalous.

Why would the British come to Egypt of all places? In 1882, there was an Anglo-Egyptian War, in response to a coup led by an army officer called Ahmed ‘Urabi. ‘Urabi fought against Tewfik Pasha, the Knedive of Egypt, who was recognised by the British and French governments of the time. The exact motivations for the British involvement are disputed by historians: some argue that it was necessary to crush the perceived anarchy of the ‘Urabi movement, while others suggest Britain needed to protect the Suez Canal, a strip of water essential to maintain a shipping route to the Indian Ocean. It’s also the case that the British had a lot of investments in Egypt, and protecting them was a hugely popular political move at home.

The war lasted three months and ended with ‘Urabi’s trial and a British occupation of Egypt. Egypt was never a colony of Britain, but it was part of a British protectorate until the country began phasing itself out. A 1922 declaration saw a new king declared, and an Anglo-Egyptian treaty of 1936 saw Britain largely withdraw in exchange for certain rights (it could state troops at the Suez Canal, and helped train the Egyptian Army). Anti-British feelings grew after World War II, where Egypt was used as an Allied base by the British. After a 1952 coup, Britain agreed to withdraw its troops and had done so before the Suez Crisis of 1956.

There was a political relationship between the two countries, but there was also a cultural one. Antiquities from Egypt had been brought to Europe at the start of the 19th century as a result of Napoleon’s campaign there– indeed, the Shelley work ‘Ozymandias’ was released in 1818, and reflected on the majesty of the pharaohs. The Victorian public were fascinated by Egypt, leading to Egyptomania. Fashion and décor were influenced by an Egyptian aesthetic, and there were even events called ‘unwrapping parties’, where people obtained a mummy to unwrap for their guests. According to some journals, there were stories of people eating bits of mummies, believing they had medicinal properties.

This fascination with Egypt coincided with an instance of increased and cheaper transport links – those fascinated by Egypt were able to go and experience it for themselves. The eventual discovery of Tutankhamen’s tomb in 1922 by Howard Carter and Lord Carnarvon reignited the interest in Egypt, and it showcased the dual attraction in holidaying there.

It was a land full of mystery and culture, but one that was distinctly accessible to the British. That’s the real attraction of these pictures. They serve as a reminder of an age of discovery and curiosity, demonstrating that heading abroad has always been motivated by a sense of adventure and the chance to experience new and different cultures.