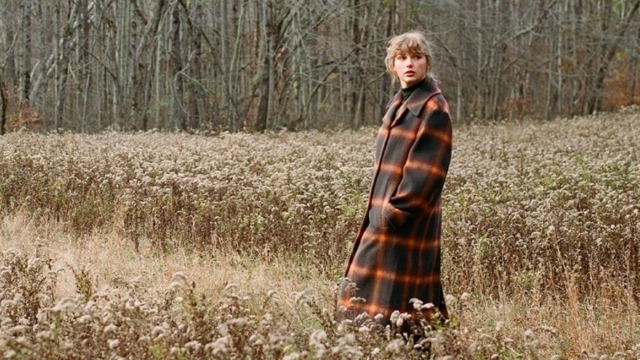 Not even 5 months after the release of her 8th studio record folklore, Taylor Swift has surprised us all again with the release of a new, sister album, evermore, proving that her lockdown is more productive than any of ours ever will be.

evermore maintains the soft acoustic folk sound of folklore, but is even more experimental, despite its sister being a complete change to its predecessor, the bubblegum pop album Lover. The album as a whole is slightly less cohesive, with more variation across the 15 song tracklist, but it’s still undeniably harmonious, further cementing her ability to successfully intertwine different styles and genres to make an overarching distinctive sound. This was achieved in part due to her use of the same collaborators as on folklore; Bon Iver, Aaron Dessner from The National, Jack Antonoff, and William Bowery, the pseudonym for Swift’s long-term boyfriend, actor Joe Alwyn.

‘willow’ is the first single, paired with an accompanying video that was released simultaneously with the album. The video is a direct continuation from ‘cardigan’, the only music video from folklore, and involves a glittering gold string connecting Swift and her love interest as she tries to follow him across magical scenery and worlds. It’s a good first single choice- it’s immediately catchy and sweet, thanks to the melodic acoustic guitar riff, and represents the album well.

This album seems to have a song for every situation, even the most specific, yet still has elements that everyone can relate to

‘no body no crime’, featuring the band of 3 sisters, Haim, is a stand-out example of Swift’s successful experimentation. This murder mystery ‘whodunit’ themed track draws on her country roots and has a dark yet humourous tone, and is very much a new sound for her. As a lover of true crime stories, girl power, and a little bit of country, this is definitely one of my favourites from first listen.

This collaboration is one of three, the most collaborations ever on a Swift album, but not all of them hold up to the same standard. The collaboration on the title track, ‘evermore’ ft. Bon Iver, doesn’t quite match Grammy-nominated ‘exile’ from folklore, and ‘coney island’ ft. The National performs similarly. Whilst both good songs, the collaborations almost seem like unnecessary additions, whereas with the Haim feature, it’s the opposite: Haim hardly sing, contributing mainly to the backing vocals, which is a shame and an under-utilisation of the band.

‘long story short’ is a throwback to her 2014 album, 1989, leaning more heavily on pop and drum snares. With references to falling “right down the rabbit hole”, it continues to draw from literature and the theme of writing about other people’s stories. ‘champagne problems’ does similar, detailing a story of a rejected marriage proposal and subsequent stigmatising of the rejector by the town (“She would’ve made such a lovely bride / What a shame she’s fucked in the head”). This album seems to have a song for every situation, even the most specific, yet still has elements that everyone can relate to.

Hope is a present theme on the album, with songs like ‘happiness’ and ‘evermore’ detailing periods in life where happiness seems elusive

‘majorie’ is a tribute to Swift’s opera singer grandmother, Majorie Finlay, and the heartbreaking vulnerability in the song is Swift at her best, creating a song that can resonate with anyone who has experienced grief. With lyrics such as “I should’ve asked you questions/ I should’ve asked you how to be/… every scrap of you would be taken from me”, she captures the what-ifs and regret, as well as the hope of suffering (“You’re still alive”, “I still feel you around”).

Hope is a present theme on the album, with songs like ‘happiness’ and ‘evermore’ detailing periods in life where happiness seems elusive.  However, as they become more layered lyrically and instrumentally, they end on more hopeful notes (“I had a feeling so peculiar /This pain wouldn’t be for evermore”). These seem particularly poignant at this time, after a year like no other due to the coronavirus pandemic. The album as a whole seems more upbeat than folklore, but if you’re searching for sad songs there’s definitely some to fit every mood- track 5 tends to be the saddest on a Taylor Swift record, and that holds true in this case with ‘tolerate it’, a song about unrequited love.

As Taylor said in an Instagram post announcing the album, a lot of people turn to music to cope in difficult times. folklore and evermore are sweet sister albums, full of vivid imagery and tales, released at a time where music may have more importance than ever. Who knows where 2021 will take us, but perhaps we should now expect the third part to this album saga in the new year.