Kirby creators HAL Laboratory clearly have a good line in creating charming characters and combining them with intuitive gameplay – one has to only look at Part Time UFO. It’s a joyful experience packed with far more content than its small price tag would seem to suggest, and it’s intuitively fun.

In the game, you play as Jobski, a little UFO who comes to Earth looking for employment. He helps a farmer who’s having a bit of trouble with a fruit delivery; the latter repays Jobski with a magazine full of job listings. What these entail in practice is using a metal claw to pick things up, move them and arrange them. By doing so Jobski is able to complete the job directives and earn money. It’s a crane game at its most simple, but it’s a lot more charming than just that.

Each job is a level with certain objectives, and the game starts off nice and simple – you catch some fish, or balance some animals for an elephant on a tightrope (it makes sense in context, I promise). Eventually, the game leads to an interesting mix of puzzles and balancing skills and, although stacking objects is easy enough, the hard part comes with the additional challenges.

Each stage in Part Time UFO has three main challenges, and accomplishing them earns you money and awards, which you need to then unlock additional stages. The game is so fun, and the gameplay is so intuitive, that you’ll want to complete the stages regardless of the incentive.

The money earned from the jobs is used to buy a variety of costumes for Jobski. These are fun and full of charm, but they also have gameplay value, as different costumes can alter (for example) how much an object swings around, or how fast the claw drops. And, of course, they help Jobski to look even more adorable – no mean feat, given how charming Part Time UFO itself is.

Each stage has a different theme and a matching aesthetic, and it’s easy to lose yourself looking for some of the hidden details in the background. The game is also accompanied by a delightful soundtrack – it’s mainly the same theme, reinterpreted and reimagined – but I never grew tired of it.

Apparently, this was a mobile game a few years back, so this Nintendo Switch version has a few new features to up the value-for-money. There’s a Toy Shop stage, where the challenge is stacking toys into a big box such that you can close the lid, and a Feats of Glory screen, which is essentially an achievement system. I also really enjoyed the newly-added Tower of Infinity – the challenge, as you may imagine, is to build a tower as high as you can without it falling over. I think I spent as much time doing this as I did playing the main game, and that’s before we even get to discussing the post-game Treasure Island mode.

You get a lot for £8.09, and the value shines through – it’s clear that the game was built with a lot of love.

I really enjoyed Part Time UFO – it’s simple to pick up and control, it’s charming, and it’s incredibly addictive. For its comparatively low price, there’s a lot of game here, and I keep revisiting it, either to attempt to beat my own record on some of the stages or to share it with friends. If you’re after a unique puzzle experience, or a delightful game that you can pick up and play on the go, Part Time UFO is well worth a shout. 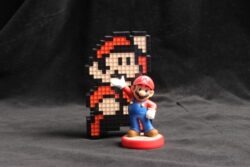