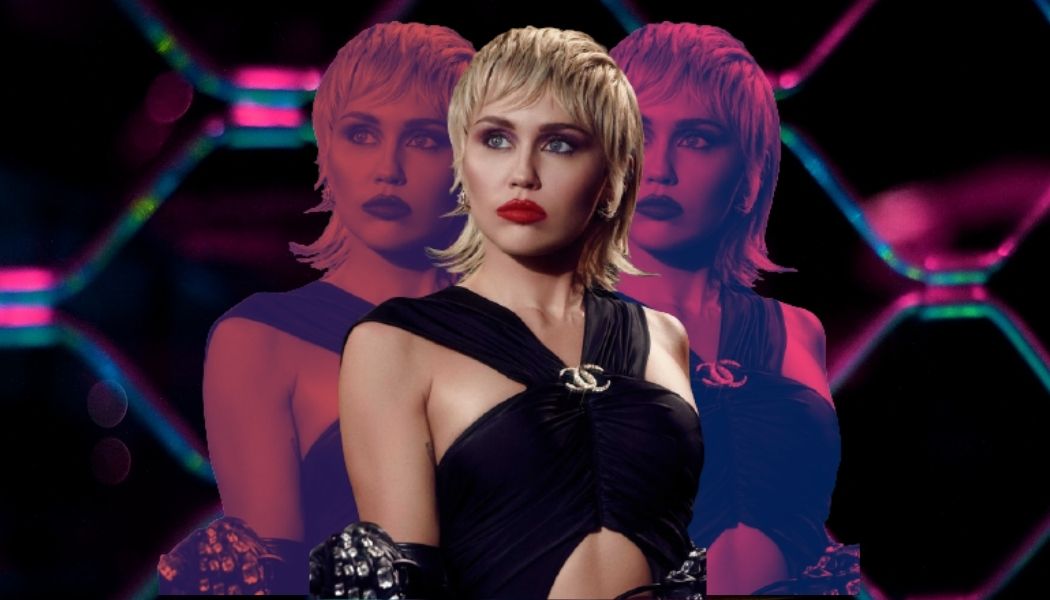 Miley Cyrus’ musical contributions this year have mainly been limited to live performances of karaoke favourites such as Blondie’s ‘Heart of Glass’ and The Cranberries’ ‘Zombie’.  Anyone who’s been a fan of Miley’s cover since her iconic reimagining of ‘Jolene’ in 2012 will know that she can make a song her own. Her raspy, matured voice has allowed her to deliver exciting live performances during a global pandemic and lots of us have been ready to hear some new original songs from her seventh studio-album Plastic Hearts.

From the crowning gift of her bleach blonde mullet (how could we expect anything less from the Cyrus dynasty) to her everything black and diamante-covered body stockings, Miley’s style rebirth has channelled the retro pop-rock royalty she also emulates throughout her new album.

The album’s lead single, ‘Midnight Sky’, was a dazzling and nostalgic track which paid homage to Stevie Nicks’ classic ‘Edge of Seventeen’. Miley sings about her new-found independence after her divorce from Liam Hemsworth, which is a stand-out theme on the album as a whole. The song almost makes you want to break up with someone for the sake of it just so you can feel what Miley is feeling. The deluxe version of the album even features a fan-made mash-up of Miley and Stevie’s tracks titled ‘Edge of Midnight’, a track sent down from the white-winged doves of eighties rock-pop heaven.

Just because Miley is a heartbreaker, this doesn’t mean that she is immune from hurt

Plastic Hearts is a clash of musical worlds with its country, pop, rock and punk influences. There is also an eclectic mix of collaborations on this album, ranging from ‘White Wedding’ singer Billy Idol to the queen of rock and roll herself, Joan Jett. Dua Lipa even features, a pop artist who, like Miley, has been having her nostalgic eighties moment this year. Olivia Newton-John walked in her spandex leotard so Dua Lipa could run.

As a Hannah Montana-loving, vintage pop-rock fan and general mullet enthusiast, when I tell you I was ready for this album I mean it – Miley’s lead-single and stripped-back, grittier live performances had promised me a lot. Although many of the songs on Plastic Hearts definitely lived up to my expectations, a part of me felt that some of her original songs did not hold their own. That being said, there are still some absolute gems on Plastic Hearts which delivers on its promises.

I love a good bit of pop, but there are some generic pop tracks that are pretty disappointing. ‘Gimme Love’, ‘Prisoner’ and ‘Hate Me’ don’t seem to do anything new. I’d maybe listen to these in the background while I’m pretending to do uni work or doing the weekly food shop.

‘Bad Karma’ featuring Joan Jett is much more daring. The drums, the swearing and Joan’s powerful, deep voice works perfectly alongside Miley’s. Joan is an icon of female rebellion and this song does her justice. ‘Bad Karma’ is to Miley what ‘Bad Reputation’ was to Joan Jett. Joan and Miley are singing in first-person about being an imperfect and sometimes cruel heartbreaker, a narrative which is often seen in songs sung by women about men or sung by men about women in the mainstream charts. The song can be seen as the grown-up daughter of Pat Benatar’s ‘Heartbreaker’: this time around it’s the woman who is singing about leaving lovers on read and not feeling guilty about it.

Plastic Hearts is underwhelming in places but does manage to provide some powerful ballads and beautiful country story-telling, seamlessly negotiating different genres that Miley loves

‘Angels Like You ‘is an absolute ballad with the basic message of ‘it’s not you, it’s me’. ‘Never Be Me’ is another powerful song which reveals Miley’s struggles with being a deeply loyal person who also has destructive tendencies and issues with commitment. It’s super honest and Miley seems to have nowhere to hide in these songs, making their confessional tone all the more painful and hard-hitting.

I might be biased as a country-fan, but I think the song ‘High’ is as beautiful as Billy Ray Cyrus with a mullet dressed in double denim. Miley, the god-daughter of Dolly Parton, honours her country roots with this collaboration with producer Mark Ronson. It seems to come out of nowhere in this heavily rock-influenced album, but its message is a welcome break from the more care-free, anti-commitment rhetoric of Plastic Hearts. The track asserts that just because Miley is a heartbreaker, this doesn’t mean that she is immune from hurt. The lyrics are dreamy and pained, and paint a visual picture of what it feels like to miss an ex. This song is vulnerable, perhaps the most vulnerable song on the album, but it is not self-pitying. It’s almost as meaningful and nuanced as Miley’s other country classic, ‘Hoedown Throwdown’.

Plastic Hearts is underwhelming in places but does manage to provide some powerful ballads and beautiful country story-telling, seamlessly negotiating different genres that Miley loves. Miley is no stranger to dipping from genre to genre, which has attracted criticism in the past. Like many other white pop artists, she has been called out for appropriating hip hop culture (see Bangerz) only to then reductively dismiss the very genre and culture that she built her success upon. In interviews on her country album Younger Now, Miley insulted many people with her comments on the ‘hip-hop’ scene.

Miley also spoke in a recent interview with Zane Lowe about Plastic Hearts and its contrast to Bangerz. She acknowledges the fact that Bangerz gave her a strong fan base and ‘security’ but still fails to credit hip-hop and Black culture, even after her appropriation of it granted her so much success. Plastic Hearts has a strong message of changing, growing and re-defining yourself, but Miley, unfortunately, seems to still be up to her old culture-vulture tricks.