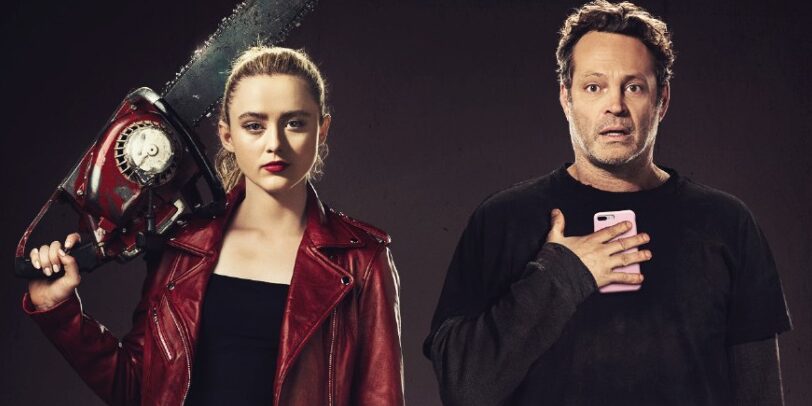 There was once a time when we saw a lot of body swap films in Hollywood. Yet, despite their popularity, it took until 2020 to mix them with another Hollywood staple – the slasher film. The resulting movie is Christopher Landon’s Freaky, a really fun picture boasting good laughs and the requisite gore, plus two very strong lead performances. It may not be a perfect film, but it’s the kind of enjoyable one we need this year.

This film’s working title was ‘Freaky Friday the 13th’, and I think that tells you everything you need to know. It follows a shy and neglected introvert called Millie (Kathryn Newton), who is attacked one night by a local serial killer known as the Blissfield Butcher (Vince Vaughn). He stabs her with a mystical dagger before being frightened off, and the two wake up the next day to a terrifying discovery – they’ve swapped bodies. Millie attempts to convince her friends of her true identity while the Butcher takes advantage of Millie’s social invisibility to keep on killing. They all learn that there’s a 24-hour time window before the change becomes permanent, so Millie tries to get her body back.

I came to Freaky expecting the laughs, but the heart was a very welcome addition

Freaky is Vince Vaughn’s best performance in years. He’s a terrifying killer in the first few scenes, but he really gets to show his comedic range when he becomes Millie. He’s fun, showing a knack for physical humour and completely believable as a teenage girl, but there’s also a surprising amount of heart in his acting. Vaughn shines in a scene where Millie’s mother (Katie Finneran) opens up to him about the death of her husband, and he gets a very moving moment with Millie’s crush too. I came to Freaky expecting the laughs, but the heart was a very welcome addition.

Newton, meanwhile, gets to thrive as a mostly-silent killer, with icy glares aplenty and a need to get physically inventive with the kills now the Butcher’s strength is gone. Millie looks like an unlikely killer, but Newton sells it really well. Related note – I bought that she was a killer, but not that this beautiful woman is meant to be considered an unattractive outcast because she wears a cardigan – it’s by far the least believable thing in this slasher comedy about body swapping. Both she and Vaughn are going for it, and they deliver.

The two leads are bolstered by a good supporting cast, including Celeste O’Connor and Misha Osherovich making the most of their cliched turns as smart friend and gay friend respectively. The dynamic between the two of them, with both Newton and Vaughn, really sells the situation. Landon’s directing again proves incredibly competent and assured, and he bounces between horror sequences and more tender moments with an unbridled enthusiasm that shows his passion for the genre, and he’s supported by an effective score by Happy Death Day collaborator Bear McCreary.

Freaky is an accomplished crowd pleaser, and clearly proud of it

The likely criticism is that, outside of the really effective opening scene, Freaky isn’t a particularly scary film – it’s more tonally similar to Happy Death Day than Friday the 13th, despite some really brutal death scenes. I personally think it balanced everything quite well, but consider this your warning if you’re expecting something genuinely scary. Freaky is an accomplished crowd pleaser, and clearly proud of it. However, my issues were more on a structural level – the point of the magic dagger gets lost quite quickly, and the finale peters out surprisingly quickly after a big build-up.

Freaky doesn’t reinvent the wheel – you can probably imagine how the film mostly plays out based on the premise alone. But it feels very fresh, doing what it does really well, and it’s a very satisfying watch as a result. It’s fun and it’s brutal, it’s clever and it packs in a lot of heart. I know the cinema situation is a bit iffy at the moment but, if you get the chance to see it, I’d really recommend it.

‘Rocks’ and the importance of female solidarity