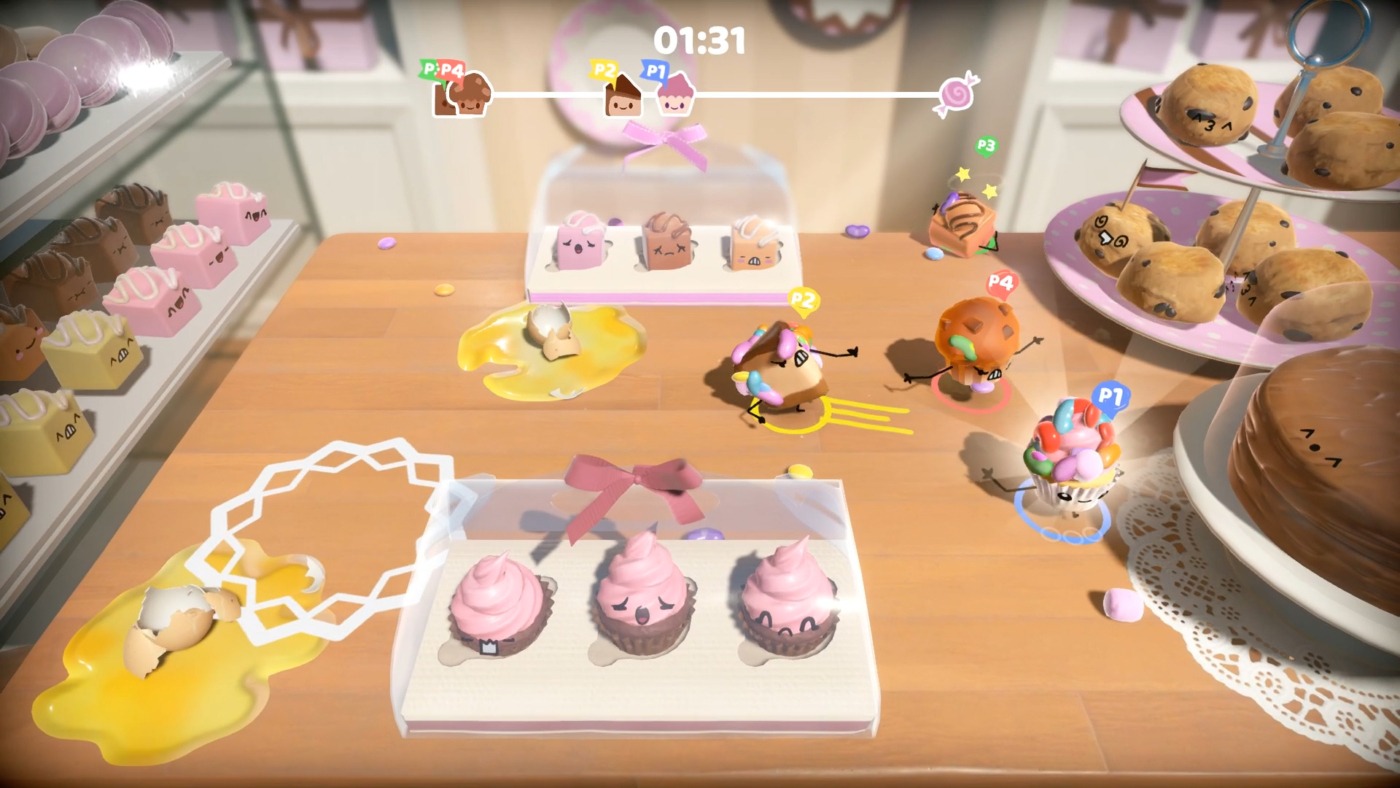 Have you ever played Mario Party and thought: “This is good, but what it really needs is more characters based on pastry products with the ability to beat each other up?”

I’m assuming you have almost certainly not, but that option is now available with the release of Cake Bash on the Nintendo Switch. It’s a sweet treat that boasts some of the highs and lows of the multiplayer party game experience, charming without ever being essential. It’ll leave a pleasant taste in your mouth, and that’s what it’s aiming to do, although it’s certainly a treat best shared with friends.

In Cake Bash, you are one of four cakes competing to become the tastiest cake in the bakery. This often takes the form of fighting with the other pastries striking and temporarily incapacitating them to complete simple tasks. If you do well, you earn coins, which you then spend during the Topping Shopping rounds. Each customer requests a certain theme (something like ‘chocolate’ or ‘cute’), and you try to decorate yourself as best you can to match that theme.

In party games, it’s better to leave your player wanting more instead of getting exhausted, and that’s where Cake Bash sits

The minigames are enjoyable, and there’s a varied mix  – some last around the two-minute mark while others take the Battle Royale format(or, as the game would have it, ‘gateaux royale’). These are linked into the cake theme really well, from a game in which you try to be covered with the most sprinkles to one in which you contend with a pigeon.

These challenges are complemented by the Bash segments of Cake Bash – your cake has some basic combat skills that result in a chaotic, but fun, time. Some of the extra minigames outside of the main party mode are the real highlights of the package, with some absurd ideas translated really well. In party games, it’s better to leave your player wanting more instead of getting exhausted, and that’s where Cake Bash sits.

The game certainly looks impressive, and every cake and minigame is brimming with character. A lot of love clearly went into the development which you can hear in the enjoyable soundtrack, and in the many bakery puns littered through the experience, and it all adds up to a very fun time playing. Kudos to whoever did the sound design – fighting cakes is such an inherently funny concept, and it sounds that way too.

On a solo level, the slight lack of content will fail to hold your attention for too long

I mentioned that Cake Bash hits both the good and the bad of party games. The variety and character of the game is great, as is how easy the game is to pick up. I could see myself sitting down with friends who’d never played this and immediately have a blast, and that’s good. But what happens if you don’t have friends available?

Playing single player in an inherently multiplayer game is always a strange experience, but in Cake Boss, it’s also a very tough one. The computer players here are either stupidly hard to beat or really dumb, and it’s incredibly off-putting. And, as with all party games, it can get stale with time – there’s not that much to hold your interest in the long term.

Cake Boss is vastly more enjoyable than I thought it would be, and that’s down to its considerable character and how intuitively fun much of the game is. If you’re the kind of person who loves the multiplayer experience, locally or online, Cake Boss will suit you to the ground. On a solo level, the slight lack of content will fail to hold your attention for too long, even though there’s definitely fun to be had. Be careful not to stuff yourself too soon, though, as Cake Boss is a game best enjoyed in small servings.