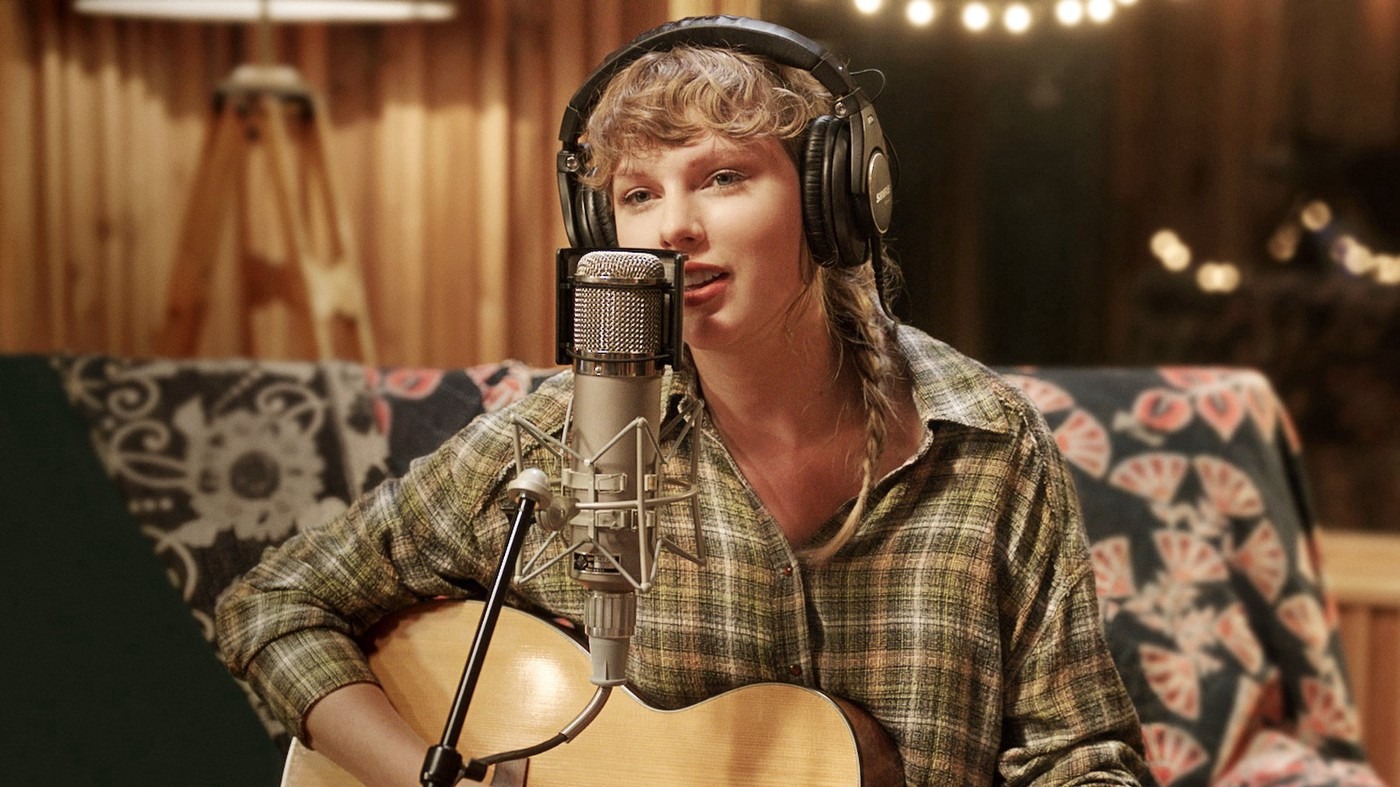 When Taylor Swift released her eighth studio album Folklore, it was not only a surprise to her fans, but to her record company who Swift informed only shortly before release. The album was recorded in lockdown with the supporting musicians in various other locations and is an interesting detour into a more stripped-down, acoustic style.

The documentary on Disney+ brings together the three writers and producers of Folklore – Swift, Aaron Dessner (of the band The National) and Jack Antonoff – to perform the songs in the same room for the first time at Dessner’s Long Pond Studios in rural New York State. The songs are even sparser than the original album which focuses greater attention on the lyrics, providing an extra dimension through the conversations on the genesis of the music and lyrics that precedes each song. Swift reveals how much of them are autobiographical and she also confirms the rumour that William Bowery, who is credited as a co-writer of ‘exile’ and ‘betty’, is in fact her boyfriend Joe Alwyn.

The songs are not directly about the pandemic, but are instead influenced by the self-reflection of values that the disruption, isolation and enforced inactivity caused as major themes of 2020. The main grit comes in the final song ‘the lakes’, which was a bonus track that was first released on the CD. Swift tells of how she is inspired by the poets who made the Lake District in England their home, but there is a wordplay message to Scooter Braun (with whom she is in dispute about her earlier recordings) in the line “I’ve come too far to watch some name-dropping sleaze to tell me what are my Wordsworth”.

It is fascinating to hear the back and forth between Swift and Dessner or Antoff. The starting point for the songs was sometimes the music and at other times the lyrics and it is illuminating to hear how one has affected the other. Swift had Alwyn in mind with the lyrics for ‘peace’, asking if their relationship can survive her fame; whereas Dessner interprets it as the difficulty his wife has with his depression and how he can find peace in music. A good lyric will mean something different to every listener.

The songs are performed in an informal manner in the studio, with Swift performing while sitting on a sofa in a dress that looks like an oversized lumberjack shirt, which is a contrast to the slick production values of the filming. This intersperses the performances with separately filmed conversations about the songs and drone shots above the idyllic setting of the studio cabin where much of the film is shot.

Justin Vernon of Bon Iver reprises his guest appearance on ‘exile’, singing through a mask from a remote location. Swift tells the touching story that she and Alwyn, who are both Bon Iver fans, imagined Vernon singing the song when they were writing it but were afraid to ask. Dessner works with Vernon on the folk side-project Big Red Machine, so could make their wish come true.

This is essential viewing for Swift fans who will be delighted to get this glimpse behind the scenes into the creative process and a new angle to approach the songs, but it is also an engrossing watch for the viewer who knows little of Swift. The mixture of professionally filmed footage and informal setting works perfectly, and the mix of conversation and songs is beautifully balanced. It is also refreshing that the talk is all about the music rather than her personal life. These new recordings will also be released as a new version of the album.