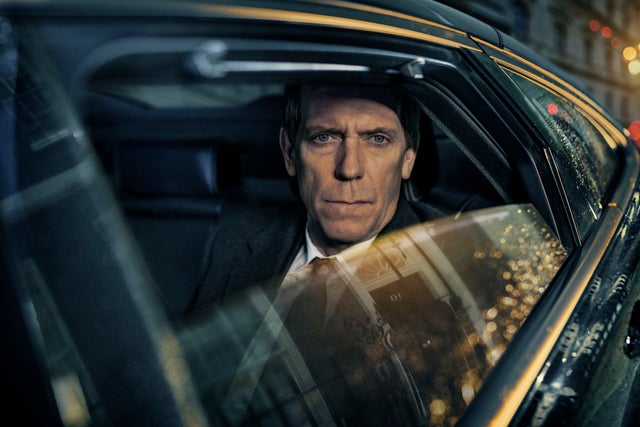 We’re nearing the end of Roadkill, and the show continues to be as ludicrous as ever. Hugh Laurie shines as Peter’s issues become a bit more personal, but it’s a small positive in a sea of poor writing and non-existent characters.

On the mend after his car accident, Peter heads to the family home for a conference with his wife and his two daughters. They’re keen on learning the truth about his affair, and Peter decides to reveal that he may have a third daughter – a daughter who, it transpires, has decided she wants to meet him. The issues in his home life may, however, start translating into potential political benefit, as the Conservative Party chairman begins putting pressure on PM Ellison after an international incident. Meanwhile, after hearing the news of Charmian Pepper’s death in Washington, Rochelle decides to pick up on her investigation into Peter Laurence.

Hugh Laurie gets away from the politics in this third episode to speak with his family, and his scenes are the best thing about this episode. He shares some good moments with Saskia Reeves (as his wife Helen) and Ophelia Lovibond (brilliant, as always, as his daughter Susan), and there’s a well-written dinner scene that sees the four family members discuss what to do from their differing perspectives. If we had more of this, Roadkill would be essential viewing.

Once again, the potential for Roadkill to be a genuinely engaging political drama is lost in a weak and often plot-hole-filled script

Once again, the potential for Roadkill to be a genuinely engaging political drama is lost in a weak and often plot-hole-filled script. Some of the issues just stem from incredible laziness, and it baffles me that they weren’t picked up on much earlier. We’re supposed to believe, for instance, that the Dictaphone in Charmian’s possession when she was run over somehow wound up neatly packed in her lunch. And, in an incredibly frustrating gap, we’re told that Sydney and Margaret are desperate to bring Peter down – but not enough, it seems, to use the hugely-incriminating document in their possession when its existence was a huge part of the Peter’s court case.

I’m still not buying that Rochelle would willingly investigate her own client and, bizarrely, when she discovers massive evidence of criminal activity, she – an officer of the law – takes it straight to the newspaper. She feels, like so many of the characters in this show, not like a person – instead, she’s a device to propel the plot, and there’s clearly a sense that keeping everything moving will gloss over the many cracks. But it really doesn’t.

It’s also hard to ignore how heavy-handed the show is getting in its politics. We open with a scene that sees Steff die of an overdose in prison – the guard doesn’t know the code to the defibrillator unit, nor how to use it, and this is part of the show’s upfront moral about everything the private sector does being evil. Peter’s daughter Rose (Shalom Brune-Franklin) tells the prison staff that Steff died because of them, with no mention of personal responsibility whatsoever. More accusations are levelled at Peter – he’s immoral, thinks only of himself, that he oversaw the death of Margaret’s death because he wouldn’t fix a boiler – and it gets a bit overkill. By the time you meet the cartoon villains of the defence contractor and the Tory chairman, you may find yourself checking out.

I’ll stick with Roadkill for two reasons. In part, there’s only one more episode to go and hopefully it may buck the curve and actually be well done. And I am actually engaged by Hugh Laurie’s performance – I’m curious to know what happens to Peter, clichéd though I’m sure it’ll be. Hopefully we’ll spend most of the final episode with Peter, instead of the bland non- characters and the daft script.