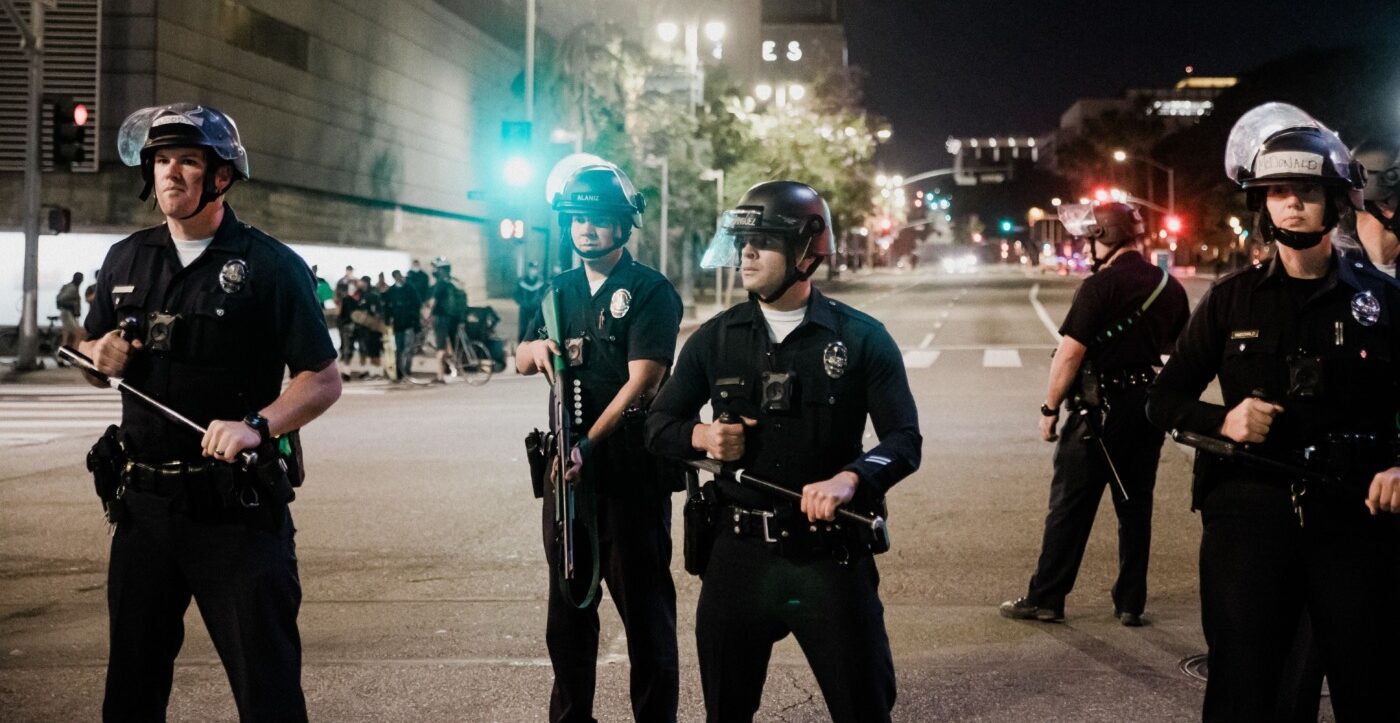 The use of Nazi ideology in police training is strikingly telling

In the midst of a Black Lives Matter movement set of by racially motivated law enforcement killings, news that extracts of Hitler’s Nazi manifesto Mein Kampf have been used to train the Kentucky State Police (KSP) sounds like it ought to be nothing more than a bad joke. Greg Belzey, a Louisville area criminal rights and police misconduct lawyer, described it as being like “something out of Borat”.

A slide show used by the KSP for training includes quotes attributed to Hitler and the confederate general Robert E Lee. The slides preach the importance of creating “ruthless killers” who will “fight to the death”, and a need to “meet violence with greater violence”. The contents of the training was first reported by a high school news publication, Emanual Redeye in Louisville, Kentucky. The nature of the slides surfaced during an investigation into a fatal police shooting in Kentucky which was handed over to the student news group by a local attorney.

The publication was followed shortly by comments from the Kentucky Justice and Public Safety Cabinet’s communications director, Morgan Hall, who said that the presentation was “unacceptable” and hasn’t been used in their training program since 2013. However, the influence of the slides continued to linger. The Washington Post reports that over 100 lives have been taken by the police in Kentucky since 2015. Of these killings, Breonna Taylor is perhaps the best known. Her murder, for which no one was charged, sparked nation-wide protests and allegations of systematic racism and a culture of aggression within the police. The usual rebuttal has been one of dismissal, claiming that these killings are the fault of “a few bad apples”, not the existence of a widespread and dangerous ideology at the heart of America’s police force.

Whether recruits join with racial bias, aggression, a thoughtless appetite for violence, or not, eventually this is what the system will try to teach them

The quoting of Hitler’s anti-Semitic manifesto was followed by a slide titled “good reads,” under which there was a link to a webpage discussing the Nazi leader. The fact that the quotes are attributed to Adolf Hitler makes them seem exceptionally noteworthy and out of place. Their content, however, is not out of character at all when it comes to the training of police in America.

Dave Grossman, a retired lieutenant colonel in the United States Army, lectures and trains police departments all over America in what he calls ‘Killology’. Grossman is a glorified expert who encourages police on duty to “embrace the responsibility to kill,” and when asked about the purpose of his teaching comments; “we’re teaching them to kill without conscious thought.” This type of “tough-guy,” chauvinism does nothing for the conjecture of a few “bad apples,” who didn’t pay attention in training and instead let their own racist and aggressive tendencies take the lead. Very much to the contrary, it now appears that the “bad apples,” are the ones who really did listen to everything they were taught upon entry. Whether recruits join with racial bias, aggression, a thoughtless appetite for violence, or not, eventually this is what the system will try to teach them.

What can be done about it? The ability for other nations to hold America accountable and force change is incredibly limited. America represents a political ideology which in the last few years has resembled the epitome of nationalism. They have broken international agreements at will and it appears that holding America accountable can only be done from within by its own citizens. A Biden presidency may bring a leader who seems to have a stronger dedication to fair law and order than to tough law and order. A change of leadership and opinion at the forefront of American politics may push an agenda aimed at the redistribution of police funding.

This redistribution should concentrate less on extending fire power and instead enforce more checks on ethical procedure. Changes to funding alone, however, won’t solve America’s policing problem. A longstanding ideology of ‘us against them’ needs to be torn out at its base. There exists a need for an evolved rhetoric which forces police to see themselves as guardians rather than warriors. As Sadiq Reynolds, President and CEO of the Louisville Urban League, states: “The language used places officers in direct opposition to the communities they serve…this training is emblematic of the root problems in policing and we should not be surprised with the resulting fruits.”

How this change will be enforced is unclear. However, the change starts by ensuring presentations which quote Hitler and end with the words “über alles” – a phrase heavily associated with nationalism under the Third Reich – are not used for training police.