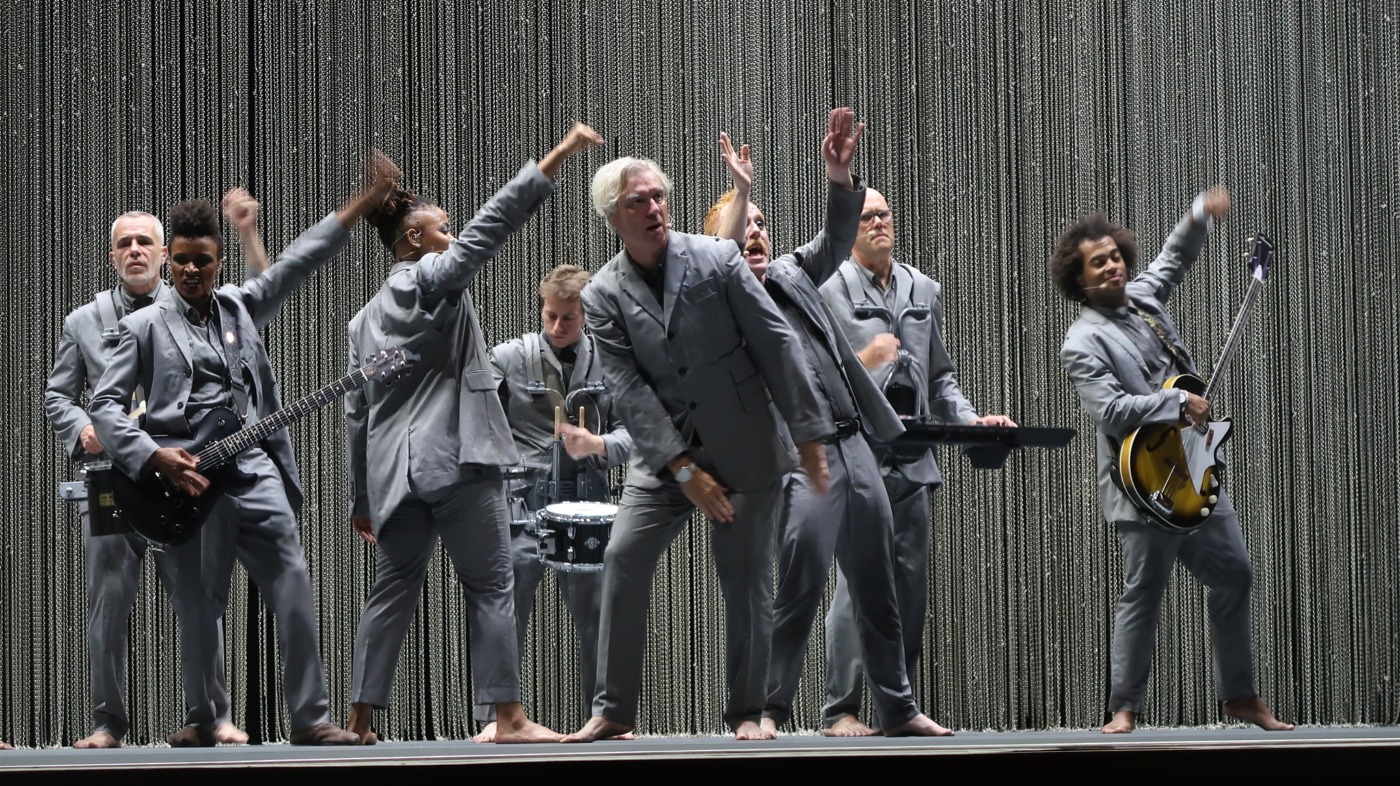 It’s been 36 years since Stop Making Sense, the Jonathan Demme-directed Talking Heads concert film, was projected into the world. The definitive concert film, and greatest example of its genre, as far as I’m concerned, is the eighth wonder of the world.

David Byrne, the magnificent frontman of Talking Heads, has returned to the realm of the concert film with American Utopia, a filmed version of his hit Broadway show, which in turn was adapted from the American Utopia tour the previous year. Helmed by Spike Lee, American Utopia proves that Stop Making Sense wasn’t just a Once in a Lifetime thing. Another definitive concert film and the first great work of art of this decade? This Must Be the Place…

I was lucky enough to see the American Utopia tour back in 2018, but a lot has happened in the two years since. Not to be a reminder of the depressing state of the world, but Byrne’s introductory monologue beginning with “Thanks for coming, thank you for leaving your homes” – a throwaway line referencing Byrne’s own anxieties, also referenced in the song ‘Everybody’s Coming to My House’ – holds a lot of new weight now. So it’s a good job the film itself is a bursting affirmation of life, an energetic presentation of who we are and what we can be.

Byrne and Lee are a miraculous pairing, with the two bringing the best out of each other

Following up Stop Making Sense would always be a daunting task, one practically born under punches, though in the hands of Spike Lee there’s no need to be worried. Byrne and Lee are a miraculous pairing, with the two bringing the best out of each other. It would’ve been easy to simply do a cover version of Stop Making Sense, yet neither succumb to that.

Byrne mixes up the setlist with solo material and Talking Heads favourites (though classics like ‘Psycho Killer’ and ‘Making Flippy Floppy’ are understandably absent – the biting line “Our Presidents crazy/Did you hear what he said” is just a bit too on the nose now, and that song was written during the Reagan administration), and Lee’s style is fully on display.

There are nods to Stop Making Sense. The genius structure of introducing a new band member after each song, for example, is done in a similar fashion here, a perfect way to demonstrate the sense of community. Like how Demme was adept at understanding people, Lee is fantastic at capturing the essence of a collective (Do The Right Thing (1989), Summer of Sam (1999)), and his camera never refrains from capturing the band. Interestingly, like Demme, Lee resists shooting the audience until the end during ‘Burning Down The House’, at which point the party has fully exploded.

The band themselves are all on their feet in constant motion – there is not a single stationary thing on the stage. The drum kit is distributed amongst multiple musicians, the keyboardist is jamming alongside the guitarist and the bassist (Bobby Wooten III, who is a highlight and is having the time of his life on stage) never stops dancing.

A complete liberation and flow of freedom, it allows for some stunningly impressive choreography, and Lee sends his camera weaving between everyone, rushing back and forth as if joining in the rhythm. It’s terrific at emphasising the band as just one gigantic family. To prove that the musicians you see are playing the music you hear, Byrne introduces each musician one by one during the formation of ‘Born Under Punches (The Heat Goes On)’ to showcase their role and how integral everyone is.

Lee’s touch can be seen elsewhere too. Between songs Byrne gives an occasional monologue, making relevant asides to current political and social issues, yet never do they feel didactic, instead flowing between songs seamlessly. They not only help us get to know Byrne a little bit better, but Byrne delivers them like well-oiled stand up. The film can happily have Byrne at one point discussing the importance of voting, and then two minutes later have the camera tilt, causing band members to stumble and fall to the other side of the stage. Like typical Spike Lee, his camera is frequently playful, but always exact.

The penultimate song (before the encore) is a cover of Janelle Monáe’s ‘Hell You Talmbout’, a protest song about African Americans unlawfully killed by law enforcement and racial violence. As each name is chanted, Lee cuts away to his camera pushing in to a photo of the deceased being held by a family member. It’s a blistering moment of power, as powerful as any moment in Lee’s oeuvre, up there with the ending montage of Bamboozled (2000) and the final scene of Blackkklansman (2018).

The songs themselves are as fantastic as you’d expect, and the sheer talent on display only heightens every number to an infectious degree. Byrne has dug into his body of work, performing songs from Talking Head’s debut (‘Don’t Worry About The Government’), songs in which he was the featured artist (‘Toe Jam’ by The Brighton Port Authority) and of course classics such as the eternal ‘Once In A Lifetime’, in which he reprises his role as a preacher drunk on faith.

The setlist allows for some astonishing choreography and cinematography: during ‘I Dance Like This’, frantic flickering strobe lights make the band (mid movement) shift their bodies frame by frame like statues in motion; the staging for ‘I Should Watch TV’ makes for some staggering compositions on Lee and Cinematographer Ellen Kuras’ behalf.

Yet it is perhaps ‘Road To Nowhere’ that affirms the essence of American Utopia. As the song continues, Byrne and his band step off the stage into the crowd, touring around the auditorium. A conga line of humanity captured with GoPros and consumer grade equipment, as if Byrne and the band have stepped through the imaginary fourth wall, bridging the gap between audience and performer – an American collective.

If Richard Dyer’s theory that entertainment is utopian in the sense that it expresses “ideals about how human life could be organised and lived […] contained in the feelings it embodies”, then David Byrne’s American Utopia is aptly titled.

A celebration of creativity, freedom, art and just how joyful the world and this life can be, this really is the idea of Utopia. I’m not saying that David Byrne’s American Utopia is going to save the world, but it sure is a reminder that everything is going to be ok. David Byrne remains at the pinnacle of concert films. Same as it ever was…