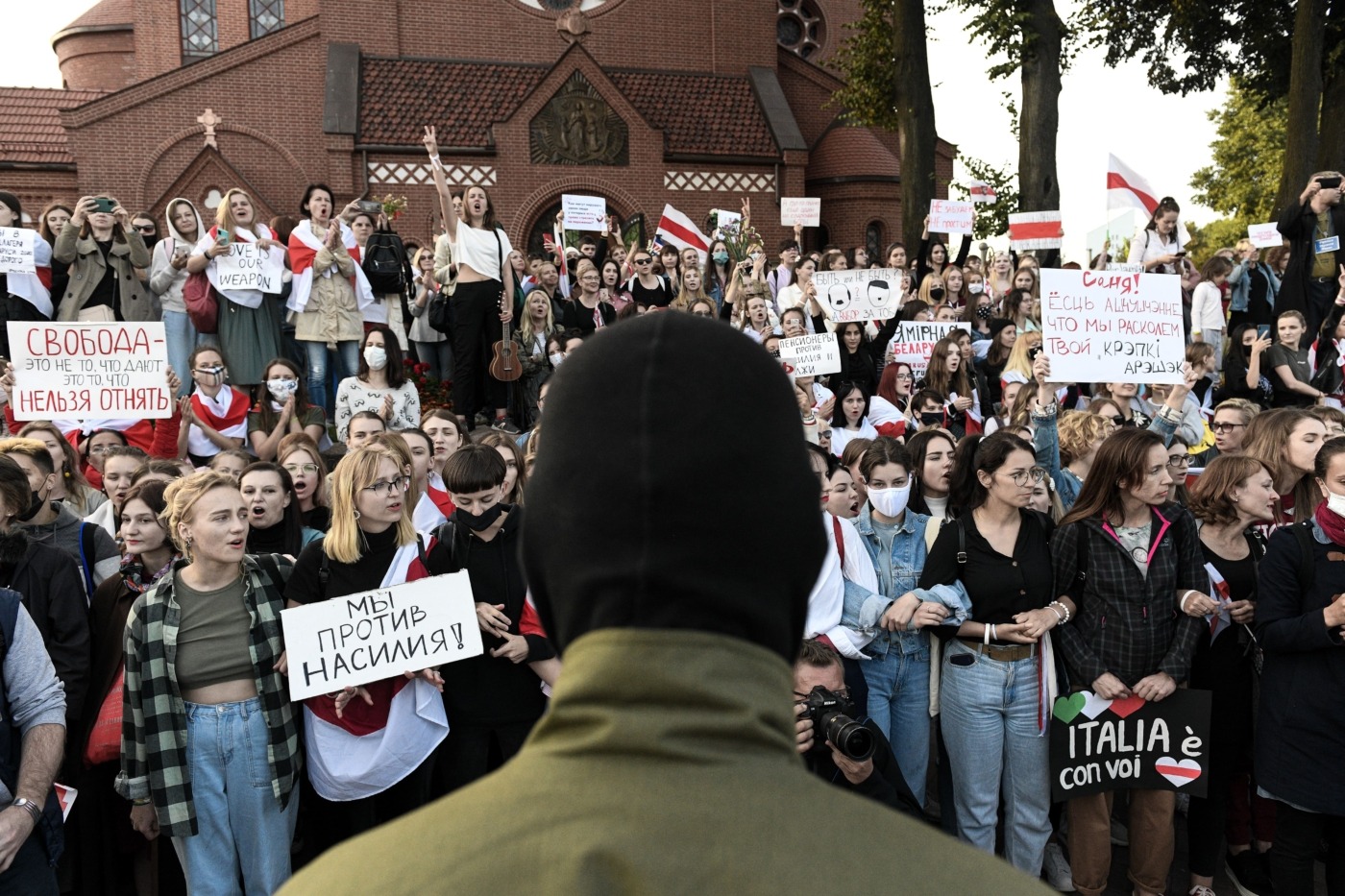 Belarus is in the middle of mass protests, triggered by what is widely believed to be a rigged election. According to the results, long-time leader Alexander Lukashenko won another vote in a landslide, but disbelief has led to a country fighting to get rid of him and an opposition leader fleeing for her life.What has happened in Belarus, and will these events lead to the toppling of Lukashenko?

Who is the leader? Lukashenko came to power in 1994, amid national chaos caused by the collapse of the Soviet Union in 1991. A strongman ruler, Lukashenko has tried to preserve many elements of Soviet communism – in Belarus, much of the manufacturing sector remains under control of the state, and the main media channels are loyal to the government. He also operates a secret police force, which is still called the KGB.

By styling himself as a tough nationalist with a direct manner, eager to put Belarus first and guarantee stability in the country, Lukashenko had established a solid voter base, maintained through equal parts genuine support and vast repression. He has also benefited from generous aid from Russia in the form of cheap oil and gas supplies, and earned the moniker ‘Europe’s last dictator’ as a result.

It was widely acknowledged that elections under the Lukashenko regime have never been particularly free or fair, but the ruler typically had a degree of public support on his side. But in recent months, the tide of public opinion has changed. People have been openly complaining about widespread corruption and poverty. There is a lack of social mobility and most Belarusians receive low pay. The onset of the Covid-19 pandemic didn’t help the incumbent – he said that it should be combated with vodka, saunas and hard work, a remark cementing a feeling that Lukashenko was reckless and out of touch. Eventually, he caught the virus himself.

People have been openly complaining about widespread corruption and poverty

Opposition candidates picked up on this sentiment in the hope that Belarus would elect someone new, so Lukashenko had a crackdown. He had two of the candidates arrested, and a third fled the country. This led to the creation of a coalition of three women closely involved in those campaigns – one of the trio, Svetlana Tikhanovskaya, registered as a candidate in place of her arrested husband, Sergey Tikhanovsky. The former English teacher and her two allies toured the country, drawing record crowds, frustrated by the lack of change. Thousands took to the street in support of Tikhanovskaya, unprecedented scenes in the country – in response, Lukashenko mocked women as unfit to lead. Come the election on 9 August, there was a sense that, perhaps, this could be a new chapter for Belarus.

Well, on Monday 10 August, the Belarus election commission revealed a set of results that didn’t surprise anyone. It claimed that Lukashenko had won 80.23% of the vote, and Tikhanovskaya had only 9.9%, although the lack of independent observers and a massive internet blackout made these numbers seem very sketchy. There were record numbers of early votes, with nearly 40% of eligible Belarusians reportedly casting their ballot before polls opened, a likely sign of ballot stuffing. A number of polling stations also ran out of ballot papers, and surpassed 100% of eligible voters. A video also circulated, showing a member of the electoral commission climbing out of a polling station with a bag full of voting slips.

There were record numbers of early votes, with nearly 40% of eligible Belarusians reportedly casting their ballots before polls opened, a likely sign of ballot stuffing

Large protests broke out in response in Minsk in response to the news, where a crowd of thousands gathered in the capital. The police were deployed, using a water cannon and rubber bullets on protestors – one person was killed after being hit by a police prisoner van, and dozens were injured. Fighting was also reported in more than 20 other cities, and the violent reaction to protests was the subject of condemnation. 3,000 people were arrested that night, and a further 3,700 have since been arrested. Many of those arrested were beaten severely.

The police were deployed, using a water cannon and rubber bullets on protestors

David Marples, a professor at the University of Alberta and an expert on Belarus, said: “It’s certainly the biggest protest I’ve ever seen in Belarus since Lukashenko came to power. In terms of the elections that Lukashenko’s held, there’s been nothing like it. It seems to me that the whole country really is in favour of change.”

The day after the vote, Tikhanovskaya urged voters not to organise anti-government protests, a message many believed was coerced. On Tuesday 11 August, she fled to neighbouring Lithuania, where she said an ultimatum involving her family caused her to leave. That Friday, she challenged the results – protocols where the vote was counted fairly show her winning by 60-70%, and the level of public support she achieved throughout the campaign was evident. She said: “The Belarusians will never want to live under the current government. The authorities have turned peaceful demonstrations into a bloodbath.” She added that she was setting up a coordination council to ensure a “peaceful transition of power”.

Protests have evolved. Details of police brutality have emerged, with many sharing pictures of their injuries on social media. This produced a new wave, with women dressing in white, carrying roses and marching through the streets. Workers began to demand answers about election irregularities, and state TV staff walked out on 17 August, joining the protests against Lukashenko. Many officials and police officers have resigned, and international footballer Ilya Shkurin announced he would not play for his country again until the president stood down. Lukashenko tried to smooth things over with a press visit to a tractor plant, but he was booed and jeered by striking workers there.

Details of police brutality have emerged, with many sharing pictures of their injuries on social media

What will happen to Lukashenko now? The answer really depends on the answers to three further questions – firstly, does the president have the support of the country’s security and defence organs? There is open disquiet about some of Lukashenko’s actions over the past few months, and how he handles further demonstrations may tip the tide against him. If the president doesn’t have the army and the police on his side, he is finished as the Belarusian leader.

Lukashenko must also contend with the international reaction. Criticism of the vote and his subsequent actions has been harsh – the USA, the UK and the EU have all stated that the vote was unfair, and the UN has condemned Belarusian authorities for violent infringement of protestors’ human rights. The EU offered to help mediate the post-election turmoil, and was decisively rejected.It is now set to impose financial sanctions against those involved in electoral fraud, and will reroute €53 million away from the government towards civil society.

The international reaction is significant, but one country matters a lot more, and that is Russia. President Putin has congratulated Lukashenko on his election victory and offered to send in Russian troops to help quell protests, but he has a bigger endgame in mind. Russia can influence the economy, security policy and politics of its small neighbour, and Lukashenko has generally been willing to play ball. But if Lukashenko is replaced by someone more pro-freedom, Putin will likely act to maintain his grip – an entirely plausible result is the annexation of Belarus, absorbing it into Russia. Belarus is a buffer zone of sorts with NATO and the EU, and Russia is unlikely to want to see it move away.

At the moment, the president shows no sign of looking to compromise. Lukashenko himself has dismissed the protestors as “puppets”, and alleged that foreign agitators are behind the protests. Opposition politicians are now being questioned by prosecutors over unlawful attempts to “seize power”, and it’s entirely possible they will face prison time as a result. Lukashenko has dismissed their demands for a new election as a western-backed coup attempt, and is likely to severely crackdown on grassroots activists if he remains in power.

Tikhanovskaya has vowed that she will “stand till the end” in the protests over elections and police violence. She may not end this story as the president of Belarus, but she is the face of a movement that shows no sign of dying down. Lukashenko’s grasp on power is shakier by the day, and violent repression is not likely to succeed in the face of international pressure. If the Belarusian people can sustain their movement and keep applying pressure to the government, 2020 could be the year that Europe’s last dictator finally falls.