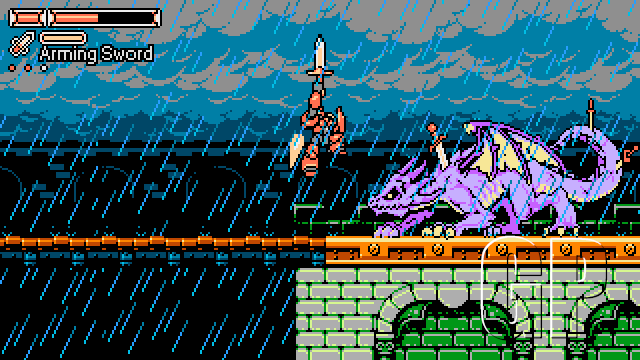 Among the many indie games that feature a retro art style, Panzer Paladin stood out to many for seeming to have a premise that genuinely captured the spirit of NES-era games, alongside gameplay that combines Mega Man’s open order of level selection and Blaster Master’s switching between a mech and the pilot. Now that Panzer Paladin is out, does it reach the same heights as other indie darlings like Shovel Knight and Super Meat Boy?

Panzer Paladin immediately strikes you with its presentation. While sharing a sprite-based aesthetic like a lot of other games, its design – especially during cutscenes – is very fluid and pleasing to look at. Every level has very distinct backgrounds to help sell the real-world locations they are based on.

The main theme song caught my attention, and while the rest of the soundtrack did not grab me in the same way, everything was fitting to the level I was playing. One thing I did appreciate about the music is that rather than just incorporate chip-tune sounds like other games, Panzer Paladin utilises a mix of real instruments and chip-tune, which makes the soundtrack stand out from the crowd.

There is a story, but it is really not the focus at all. Huge weapons have started to fall from space, which serves as gateways to allow monsters to roam the Earth, and it’s your job to stop them. Clearly this is a game that places the gameplay first: yet sadly for me, this is where Panzer Paladin falters the most.

I found that some stages felt considerably harder than others, which made me feel that there was a considerable lack of balance between levels

After a tutorial level, the rest of the stages can be completed in any order, very much like Mega Man. However, I found that some stages felt considerably harder than others, which made me feel that there was a considerable lack of balance between levels. Mega Man offers a reason to do stages in a particular order, as defeating a boss gives you their weapon, which serves as a weakness to another boss to more easily beat them in another level. Panzer Paladin does something similar where bosses do drop their weapons after defeat, but there is no elemental system at play, so the weapons are not particularly useful. They serve as slightly more durable versions of regular weapons that have no advantages over other bosses.

The basic gameplay of Panzer Paladin is 2D-platforming, where players control the mech Grit, who wields a shield and weapon of choice. The shield can be used to block projectiles, though I found this to be a bit finicky in the heat of the moment. All weapons in the game break and up to four can be switched out on the fly, yet there is never any real pressure to avoid combat or strategically save weapons.

Enemies drop weapons so often that you’ll always have a surplus, and there are no noticeable differences between them outside of aesthetics. A cricket bat is swung in exactly the same way as a rapier, for example. Each weapon can also be broken at any time by the player and doing so will cause a certain spell to occur. These spells vary between weapons, such as granting stat buffs, healing, or unique attacks. However, I never felt to use them outside of boss fights, simply because they were not necessary. So, each level was more so just me stockpiling as many weapons as possible until the boss fights.

It’s a fine enough game, but there are much better options available

When Grit runs out of health, the pilot, Flame, is ejected, and she has to beat the rest of the level on foot. While this was a good idea in games like Blaster Master, where both characters have unique abilities to make exploration more varied, in Panzer Paladin, this idea is very under-utilised. There are moments in each level where players have to play as Flame to progress, yet these are just very quick platforming sections where you have to make 2-3 jumps over a bottomless pit. They are over instantly before control can be resumed in the mech, which makes them feel completely pointless.

If you are forced to play as Flame because Grit has run out of health, then the game becomes significantly more brutal. There are only two checkpoints per stage, which are activated by Grit leaving behind a weapon. This is a good idea in concept, but the execution is flawed. With the number of weapons the player is given per stage, this never feels like a significant decision between preserving weapons and stage progress, and activating these checkpoints can only be done by Grit. So, if you die as Grit and have to carry on as Flame, not only can she not activate any checkpoints, but her tiny health bar means she will die very quickly and lose all the progress made thus far. This often made me frustrated, given that I’d lose a lot of progress and have to repeat many sections of levels, an issue compounded further by the limited lives system. Difficulty options can increase the number of lives given, but I felt this didn’t really help given the limited checkpoints.

Panzer Paladin has a lot of promise with its concept and mechanics that I’d love to see fleshed out in a sequel, but as it stands, Panzer Paladin serves as a few half-baked ideas that weren’t properly thought through. It’s a fine enough game, but there are much better options available.