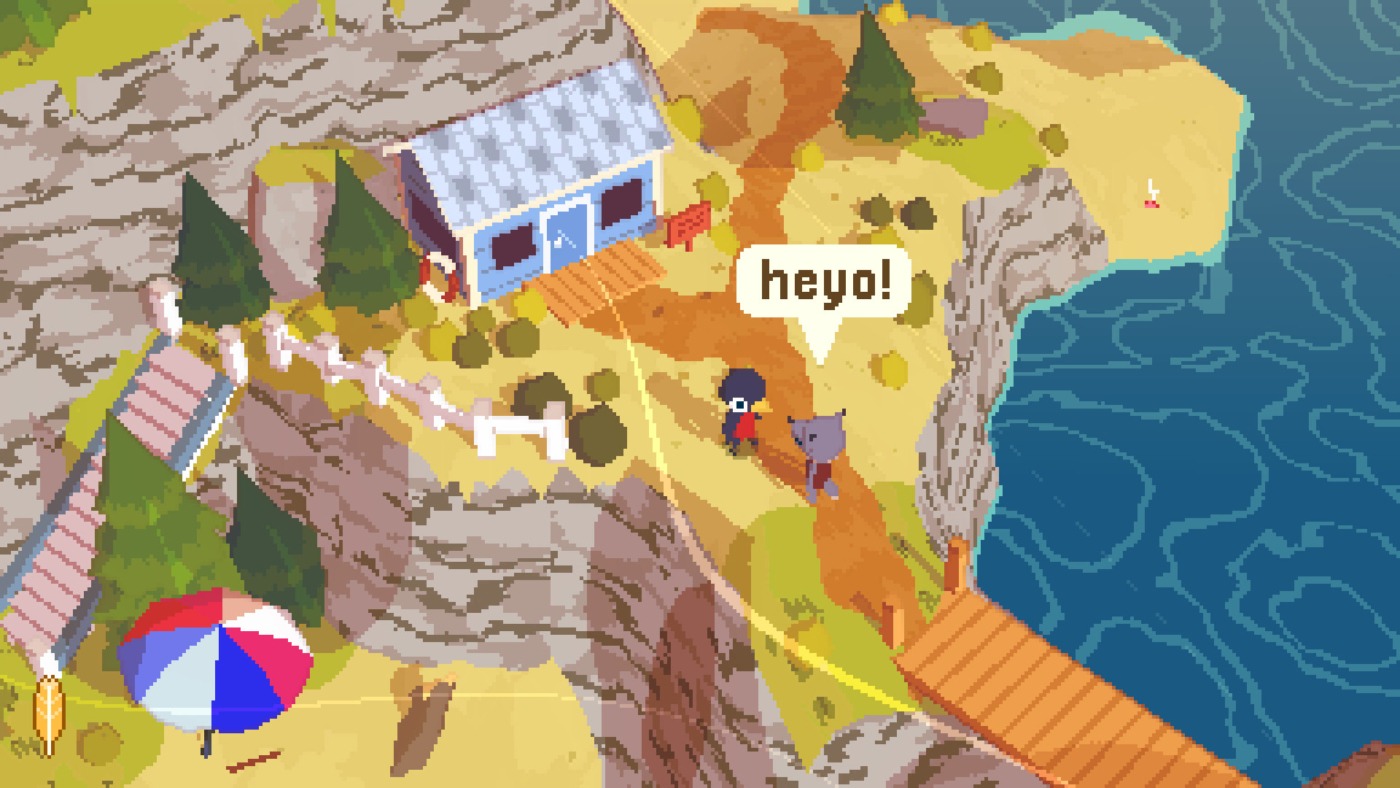 Nintendo recently held an Indie World presentation, highlighting a bunch of indie games that are coming to the system. Many of the reveals were released on the same day, so we thought what better time than now to give some quick thoughts about some of the games revealed!

A Short Hike released last year on PC, Mac and Linux, and now has reached the Switch before other consoles. Like the name would suggest, this is indeed a short game, beatable in under an hour. A Short Hike is a simple adventure game where you explore an island.

There are no enemies or deaths, or really any conflicts. It’s as simple as exploring and finding golden feathers, which allows the protagonist, Claire, to jump and climb higher with each one acquired. Your goal is simply to get to the highest point of the island’s mountain, and your means of acquiring feathers is pretty easy. You can find these feathers through either sheer exploration or just collecting money to buy them from a shop.

If you want a very relaxed and short game, A Short Hike can be a good option, and thankfully the price is not asking too much. With DS-esque visuals and a relaxed vibe, A Short Hike is a nice little game to spend some time on.

One of the more notable announcements of the Indie World was Raji, the first game developed by Indian studio Nodding Heads Games and serving as a timed exclusive on Switch until it releases on other platforms later this year.

Set in India and based on classical Hindu mythology, Raji is an action game that tells the story of Raji saving her younger brother Golu from demons. The story is simple, but there’s not much else to it, although it is nice to have some Hindu mythology explained for those who are unfamiliar.

The game looks good for a first game, but won’t blow anyone away, and the soundtrack similarly is nice but nothing remarkable. The gameplay consists of basic action combat, almost playing like a Marvel Ultimate Alliance game. Players move, jump and attack with simple combos, and gain three unique weapons and elemental properties to combine. While this is a pleasant idea, I felt that the elemental aspects were never fully utilised, and once I had the final weapon, I never felt the need to use the prior two.

The game can be a bit rough in spots, particularly in combat as well as some platforming sections, and it even crashed on one occasion when trying to reload save data due to a softlock. However, I don’t think it’s awful by any means. For those who are curious, Raji is a decent enough game, though there are absolutely better options out there. Nevertheless, I feel like the studio has potential and that the ideas in Raji could absolutely be refined for a sequel.

On first glance, Gleamlight looks like Hollow Knight, with a focus on minimalist UI, action gameplay and a dark yet pretty environment to explore. However, this is where the comparisons sadly end, as Gleamlight, unfortunately, falls short in just about every way.

While the graphics are great, the music of Gleamlight never stood out to me, and the gameplay is very unremarkable. Whereas Hollow Knight prioritises fast and fluid movement, Gleamlight feels very sluggish in comparison with very few attack options. The central gimmick is that your character steals health from enemies when attacking, which is fine, but the problem is that when you take damage, both your character and screen get darker, making it harder to see and avoid enemies. It never becomes pitch black, but it would annoy me to essentially have to try a section again simply because I couldn’t see.

I gave up on Gleamlight because it just didn’t do anything especially well, particularly when compared to contemporaries like Hollow Knight. Hollow Knight costs about the same as Gleamlight, so I would recommend your time and money go there rather than Gleamlight.

Initially an Apple Arcade exclusive, Takeshi & Hiroshi is a short but cute game about two brothers who love game development. Takeshi makes a game for his brother to play whilst in hospital, and the story never gets more complex than that.

The cut-scenes use a gorgeous stop motion style of animation, something quite unique that helps it stand out. You alternate between watching these short cut-scenes and playing Takeshi’s game. You go through 5 waves of enemies per level, deciding which and how enemies to fight. The goal of each level is to raise Hiroshi’s enjoyment meter to a set amount by having the character fight battles. While you can die, there are checkpoints in each level, and you can’t just fight one of the easiest enemies, or else you’ll actually lose points from the enjoyment meter. This makes the game quite puzzle-like in nature, which was a nice surprise, and these fights aren’t as simple as attempting once and beating them, as in the later stages I did have to retry quite a few times.

The game is still quite short – which is a problem, considering there’s really only five levels to play through, though the price is reflective of this. I had fun with Takeshi & Hiroshi, and it is not a must-play by any means but is a great, short distraction.

Easily my favourite of the games here, Manifold Garden is available on everything and is a game I would definitely recommend. It’s a first-person puzzle game akin to Portal and Superliminal, except here the focus is on Escher-inspired levels, meaning perspective-shifting and infinite loops play a big part.

Manifold Garden is simple to get a hold of at first, as each puzzle requires you to use coloured blocks to open the way forward. The game then takes this further as it progresses by requiring clever use of physics to progress. The game looks stunning thanks to its inspiration, and even includes a photo mode to take in the environment in unique ways. The soundtrack is atmospheric, doing a great job of matching the game’s ambience. It took me around four hours to beat the game, though this can vary depending on your skill at the game.

There isn’t much in terms of replay value, but that’s often the case for games like this, and I could see myself coming back after a while trying to remember the solutions to the puzzles. Manifold Garden is an incredibly unique game and one that I would recommend for anyone looking for a good puzzle game.