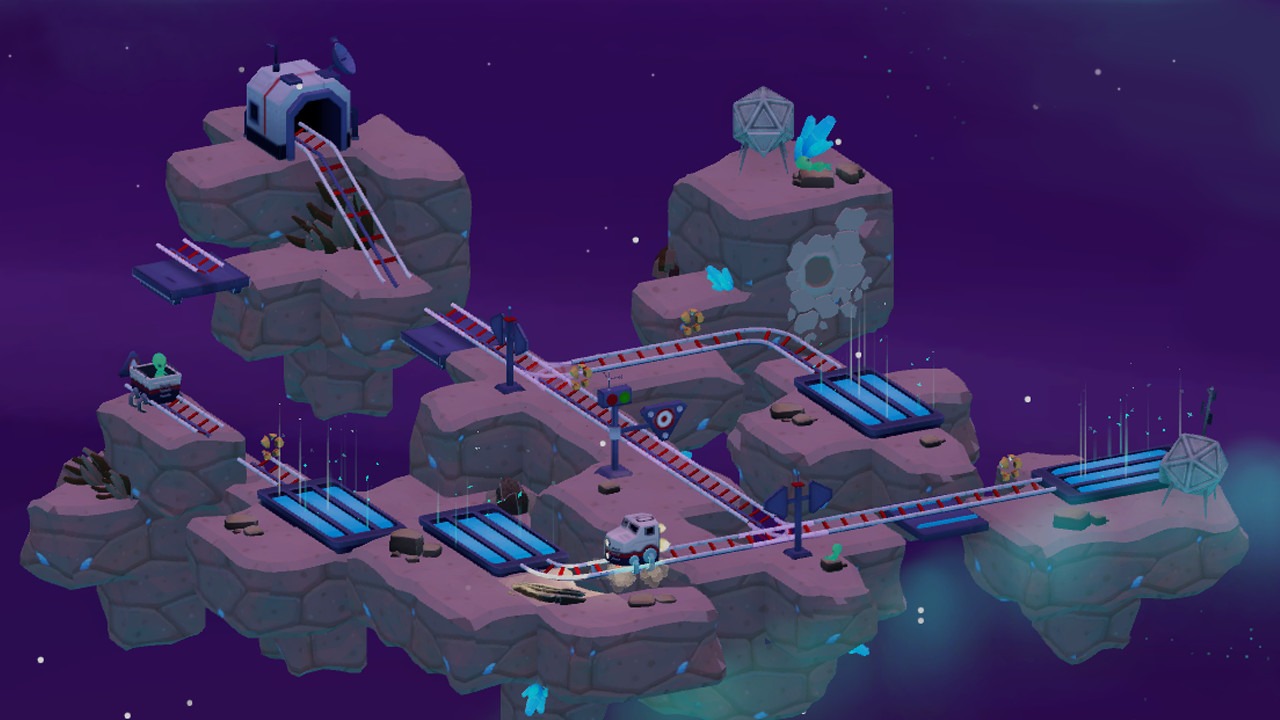 True to form, I’ve been playing an indie puzzle game on the Switch. Locomotion is a charming train-based puzzler that makes for a wonderful addition to the Switch’s catalogue, even if minor control issues prevent it from feeling as accessible as it should be.

The premise of Locomotion is a simple one: you need to collect gold and reach the end-level goal. The set-up is akin to Captain Toad: Treasure Tracker, as you can see the entire course and you need to figure out how to manipulate it. You go through a quick introduction with a hilarious conductor character who explains the controls, and then you’re left to your own devices. Through 52 levels, you manoeuvre switches, levers, carriages, and many other obstacles to get your train to the goal.

It may be a cute puzzler, but Locomotion also packs in a little story to tie everything together. Your train goes from level to level collecting gold, but you have a surprising enemy – little green aliens, who are also after the precious metal. You need to find them and what they’re doing, while collecting gold at the same time. There’s not much more than that, and there doesn’t need to be, but the love that the developers poured into this tiny aspect shows throughout, imbuing a set of puzzles with a lot of charm. Plus, if you make it to the end, you get a fantastic ending that I won’t spoil here.

Locomotion is full of charm, with a jolly soundtrack and a colourful aesthetic, making the playing experience a pleasant one

Now, the strength of a puzzle game really comes down to two things – the accessibility and the fairness of its puzzles. Locomotion is not a simple game, and it’s hard to crack some of the puzzles, but to the extent that it feels really satisfying when you finally find the solution. The controls are easy to pick up, and every interactive element is labelled with the button you need to press to use it. You need to use everything on the stage to succeed, and any difficulty stems from figuring out what to do with them, not how to use them.

The game’s charming art style means you’ll want to spend time exploring the world. Locomotion is full of charm, with a jolly soundtrack and a colourful aesthetic, making the playing experience a pleasant one, even when you’re struggling to crack the puzzles. I enjoyed the Western-inflected music – I could listen to some of the tracks here outside of the game, they’re that fun.

An annoying issue, if not a game-breaking one, is that elements of the controls are unnecessarily fiddly. Spinning the level enables you to get a clearer view of the stage, but I found that it occasionally altered the direction of the train too. It’s just a small annoying thing, but changing the camera direction shouldn’t also change the train direction, and it feels like a design flaw. Fortunately, if you get stuck, you can press the minus button to restart the level, but this is in many instances too far – it would have been nicer to have a less nuclear undo button. Similarly, an option to reverse the inverted camera controls, or to zoom in and out a little, would have been handy.

Locomotion is a charming indie puzzle game that wins your heart, as it really tests your thinking. Some bugbears with the control scheme aside, Locomotion is well worth a go: it’s cheap at its £8.99 price, and it’ll keep you entertained for hours.