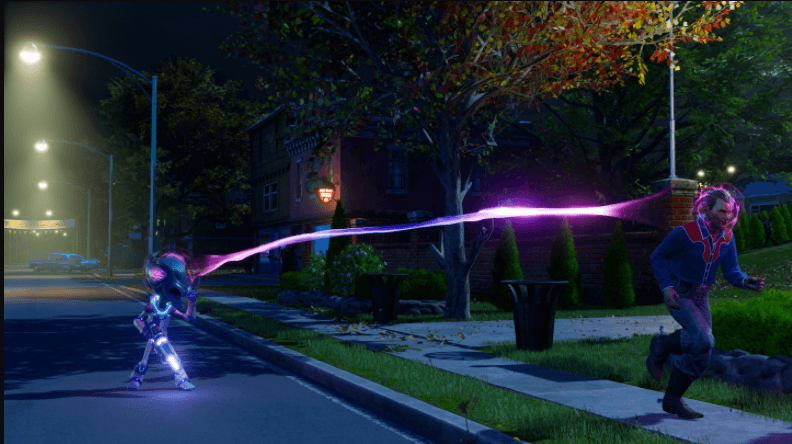 The original PS2 Destroy All Humans holds a dear spot in my heart.  I loved Crypto’s biting sarcasm, his chastising boss, Pox, and his all-consuming contempt for every living creature he encounters.  The remake delivers on all fronts, keeping the dialogue and plot while making some much-needed gameplay improvements.

Much like old Warner Bros cartoons, this remake contains a warning that the dialogue has been kept the same and that modern players may find representations less appropriate than they did years ago.  While the original is a satire of American politics and McCarthyism, the remaster serves as a critique for how games represented women and non-Americans just 15 years ago.  Obviously, there is an argument to be had about how complicit the remaster is in propagating negative stereotypes but that would take a whole article of its own.

With the benefit of being older and more aware of history and politics, the game’s satire is even better than I remember it.  The game really hammers home the blind patriotism and hatred of all things foreign and Communist that America was – and to an extent still is – known for.  Impersonating a local mayor and ignoring all the town’s questions by stating how this was the most American town ever felt a little too real.

The remake looks how I thought the original did at the time – nostalgia is a powerful thing.  However, the graphics have been radically overhauled.  The remaster retains the original’s art style while exaggerating it slightly and making all the colours more saturated.  This is a bit of an issue, as some objects look luminous and out of place, but mostly it’s a welcome upgrade.  The world of Area 42 and the sun and beach of Santa Modesta look phenomenal now.

I’m playing on PS4, and this seems to have led to relatively long load times.  Each area is a decently sized sandbox with a fair bit going on, but when all you want to do is invade and wreak havoc, any delay is annoying.  The funny loading screens help make the wait more bearable, though.

The gameplay is drastically improved in the remaster.  A ‘dash’ move has been added to compensate for Crypto’s relatively slow speed and the enemy’s decent accuracy.  Instead of finding ammo around the world, you now turn small objects into ammunition, making the game feel a bit more modern and less like an arcade shooter.  The spaceship is also now able to drain vehicles of their energy to replenish its own health and it gains a repulse ability, useful for redirecting missiles and massively improving its survivability.  None of these changes make the game too easy.  I remember the first game being quite challenging at times, and the remaster keeps the challenge. One change I really disliked was the telekinetic powers.  You used to be able to choose a direction to throw an enemy once they were in the air, but now the game forces you to find a target or it just drops them.  No more slamming enemies into the ground or flinging them into the sky and waiting to see where they landed, unfortunately.  It isn’t game-breaking by any means, but it isn’t as fun as it was in the original.  It could be a restriction intended to add challenge for an older and more experienced audience, but in reality, it just takes away some of the silly fun of the original.

The remake makes me not only properly appreciate the satire of the US, but also the state of representation in the games industry just 15 years ago

What is strange is just how much better this remake is than THQ Nordic’s last remake.  This feels like what a remake should be – keeping the spirit of an original product whilst also adding some modern features.  It isn’t perfect, but neither was the original game.  Considering this remake manages to keep the story and most of the game the same while adding some great quality of life improvements, I’d say it’s worth a buy – whether you experienced the silliness of the original, or just want a new game you’ve never played before.  While the PS2 original will always hold a special place in my memory, I think that is where it will stay.  Old Crypto can rest, HD Crypto is here now.  The remake retains what made the original great, while imperfectly fixing some of its issues.

The remake makes me not only properly appreciate the satire of the US, but also the state of representation in the games industry just 15 years ago.  As someone who wants to write games, it’s a staunch reminder to not simply accept the views of the times but try to improve on them.  Otherwise, 15 years later, someone might remake your game and warn everyone what you wrote was actually super offensive…