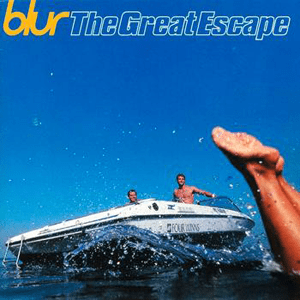 Following their 1994 opus Parklife, Blur released The Great Escape at Britpop’s zenith. To say its reception was mixed is an understatement. Upon release, it was immensely praised by the likes of Melody Maker magazine; however, outlets such as Time magazine viewed this Blur offering as lacklustre. Shortly after the success of their rival Oasis’ iconic What’s the Story? Morning Glory (1995), this LP was branded profoundly inferior, leaving many to feel that Oasis may have won the war of Britpop despite losing the chart battle.

Then a few years later, critics – like James McMahon of the BBC – revised such opinions, suggesting this album wasn’t a total disappointment. But it didn’t stop the frontman himself Damon Albarn from declaring this project to be one of the worst in Blur’s discography. So how exactly should this album be remembered?

The major problem with this LP is that Blur were covering familiar ground – ground which they traversed almost perfectly with Parklife – resulting in many songs in the tracklist feeling toothless and uninspired. Great Escape’s opener ‘Stereotypes’ epitomises this.

The song isn’t inherently bad but no real songwriting risks are attempted here, and Albarn’s character study is unpleasant and cynical: references to couples “[watching] themselves [making love] on video” isn’t particularly appealing. ‘Mr Robinson’s Quango’ also has some gross lyrics, given Albarn depicts a right-wing, businessman with “herpes”. Superficially this may seem funny but it inherently reeks of cynicism and complacency. Blur’s last project was both masterfully funny and charming at points. The band here are on autopilot and it’s a recurring realisation that plagues this LP.

Cuts like these are emblematic of Blur being on cruise control

‘Country House’ has to be the worst top ten single Blur has ever produced. It’s unfortunate this happens to be their first Number One single, and one they saw fit to put forward in the Battle of Britpop. I’m sure no one would now consider this representative of the band’s talent. The track’s intro sounds like it should accompany a cartoon character’s tumble down a flight of stairs, and is an utter parody of the band itself. Despite its serviceable chorus and lyrics, it is too clownish and prolonged. It rightly sent lead guitarist Graham Coxon over the edge.

The Great Escape is incredibly messy and unfocused. Disposable tracks like ‘Globe Alone’ and ‘Fade Away’ are fundamentally uninteresting, with subject matters ranging from a man’s troubling materialism and an unsatisfactory marriage are too unambitious in concept or lukewarm in delivery. Cuts like these are emblematic of Blur being on cruise control.

However, there are brilliant moments on this LP. ‘Charmless Man’, allegedly inspired by Albarn’s rivalry with Brett Anderson of Suede fame, has Albarn’s sharpest poetry on the whole record. The cleverness is undeniable when Albarn sings the man was “educated the expensive way/ He knows his claret from his Beaujolais”. Coxon’s phrasings and licks are apt, and Dave Rowntree’s drumming is expressively groovy.

‘The Universal’ is also a tremendous ballad. Although the lyrics border on poetic and vague, the Orwellian dystopia is conveyed well, and the string and vocal arrangements are delightful. The track gets extra credit for its music video paying homage to the amazing 1971 film A Clockwork Orange (and its perhaps more notable feature in adverts for British Gas).

Clearly Blur were tired of Britpop

The tightest song on the record would have to be ‘It Could Be You’. Albarn’s vocals are brilliant, and the vocal arrangements are well-conceived. Despite the subject matter of the British lottery being somewhat trivial, the track is worthy of its praise and appreciation.

This album perhaps represents the dying embers of music’s influence on pop culture en masse. Blur (and their nemesis Oasis) were such pop sensations that their subsequent releases stopped Britain in its tracks. Few listen to pop music as seriously or intently anymore, partly due to its democratisation in recent years. There will never be another artist who will sell out a massive venue with such ease like Oasis did with Knebworth in 1996.

Although it’s often considered that Oasis’ Be Here Now(1997) killed Britpop, The Great Escape marked the beginning of its end by a band who sought to legitimise the subgenre only a couple years prior.