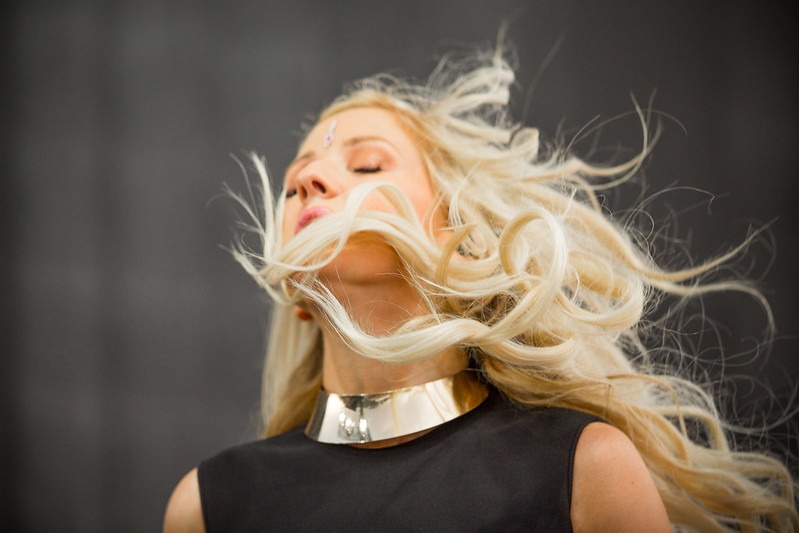 Returning to the music scene after her last album in 2015, Ellie Goulding takes a break from dancefloor bangers to deliver a refreshing and mature pop record. Though significantly lower tempo than its heavily EDM-influenced predecessor Delirium, Goulding is still catchy as ever on her new album.

On Brightest Blue, she dials back the electronics from her previous releases in favour of a more simplistic sound based around stripped-back acoustics and orchestral elements blended with subtle synth sampling. Her placement of piano and string instrumentation at the forefront of the album’s production is reminiscent of her work on Halycon.

However, on her fourth studio album coming half a decade after her last release, Goulding seems eager to cover new ground. Adding to her folk synth-pop vocals that have been central to her repertoire since her debut Lights, she draws inspiration from contemporary R&B, collaborating with the likes of blackbear, Swae Lee and the recently deceased Juice WRLD. Goulding pushes these influences beyond the album’s collab tracks into the soulful verses in ‘Love I’m Given’ while incorporating nuances of 90s hip-hop in the title track and mixing in lo-fi elements on ‘New Heights’.

Shifting away from the primary dance-pop direction of Delirium, she is aware of the need to switch things up – EDM isn’t nearly as fresh and exciting as it was in the midst of the last decade and club bangers no longer stand out in charts saturated in electropop. That is not to say Goulding is simply trend-chasing here – on Brightest Blue she shows she is more than just a chart-topper, transitioning to adopt a more mature sound appropriate for an artist who has had three albums to explore her strengths.

While she generally pulls away from it, there are moments where Goulding is caught holding onto her dance-pop origins

In a composition that thematically as well as stylistically stresses change, she is aware of her growth as a person and performer. Asserting “I’m turning the pages on my indecision” in the lyrics of ‘Love I’m Given’, Goulding consciously promotes Brightest Blue as a break through the hesitancy that characterised the gap between her last album.

On ‘Woman’, she is equally reflective, expressing difficulties faced as a female artist in the music industry and her triumph in overcoming them. Many of the tracks bring a fresh perspective to topics approached earlier in her career – her lyrics about toxic relationships on ‘Power’ and ‘How Deep Is Too Deep’ are familiar for anyone who has heard her past albums. These are more than simple hashes of her 2015 heartbreak anthem ‘Outside’ though – in re-approaching these themes she displays greater empowerment and maturity as someone approaching their mid-30s.

While she generally pulls away from it, there are moments where Goulding is caught holding onto her dance-pop origins. ‘Close to Me’ features DJ and EDM star Diplo and she chooses to wrap up the album’s international version with ‘Sixteen’ – a bubbly electronic banger making an interesting and perhaps anti-climactic endnote for a project which tries so hard to change musical direction.

There is also the strange placement of ‘Tides’ – a house-influenced track influenced by French EDM group The Blaze – after a series of much mellower ballads. Even when she attempts to blend it back into the arrangements with a synthesised interlude (‘Wine Drunk’), it just sounds out of place. Incorporating some of her initial influences into the album wasn’t necessarily a bad idea – it had potential to showcase the album as a development of past material. However, their sequencing could have been managed a lot better. As it stands, these tracks just feel awkwardly squeezed between the rest of the tracklist.

Goulding has always been about atmosphere, and creating a sensational listening experience is what she does best

That said, Brightest Blue is as much about Goulding having fun with sounds as it is a serious career-defining statement: Goulding isn’t necessarily chasing a complete and polished sound here. Her split of the album into two parts, the second side (EG.0) being mostly collaborations, makes it very clear that she didn’t have cohesion in mind while making this record. As she explains on Spotify Storylines, she slides an alter-ego section onto the album to allow her to adopt another personality for tracks which don’t fit the tone of the others. Separated by a dramatic orchestral interlude (‘Overture’) with a choral climax which builds well into the pounding trap beat of ‘Worry About Me’, the transition is well-done and one of the most enjoyable moments on the album.

While this might not be an electronic dance record, Goulding approaches it with a similar mindset – mood and feel are at the centre of its production. Right from Lights, Goulding has always been about atmosphere, and creating a sensational listening experience is what she does best. Though dropping the ambitious syncopation of earlier dance hits, animated vocals and theatrical rhythms make Brightest Blue every bit as captivating. As suggested by its title, Goulding’s fourth record is a breath of bright optimism, full of uplifting feel-good tracks. Even when singing about a friend’s turbulent relationship on ‘Bleach,’ her light acoustics coupled with a soft melodious tone almost drift above the subject matter as a blissful rhythmic escape.

The album holds many standout moments of brilliance. Undoubtedly, ‘Slow Grenade’ is the catchiest track on the record, with its percussive acoustics and bouncy drumbeat providing a strong backdrop for the combination of Goulding’s vibrant staccato choruses and featuring artist Lauv’s gentle harmonisation. ‘Flux’ might be Goulding’s best vocal showcase to date, demonstrating her versatility through smooth transitions between raspy lows and her bright upper register backed by a variety of orchestral and choral sounds.

Covering fresh territory while maintaining the atmosphere of previous releases, Brightest Blue is a strong and promising return from Goulding. While parts may feel incohesive and lack the completeness that would make for a more polished record, it still manages to highlight her growth and renewed confidence as an artist. As an hour-long pop album, it is a colourful listening experience that does not disappoint.