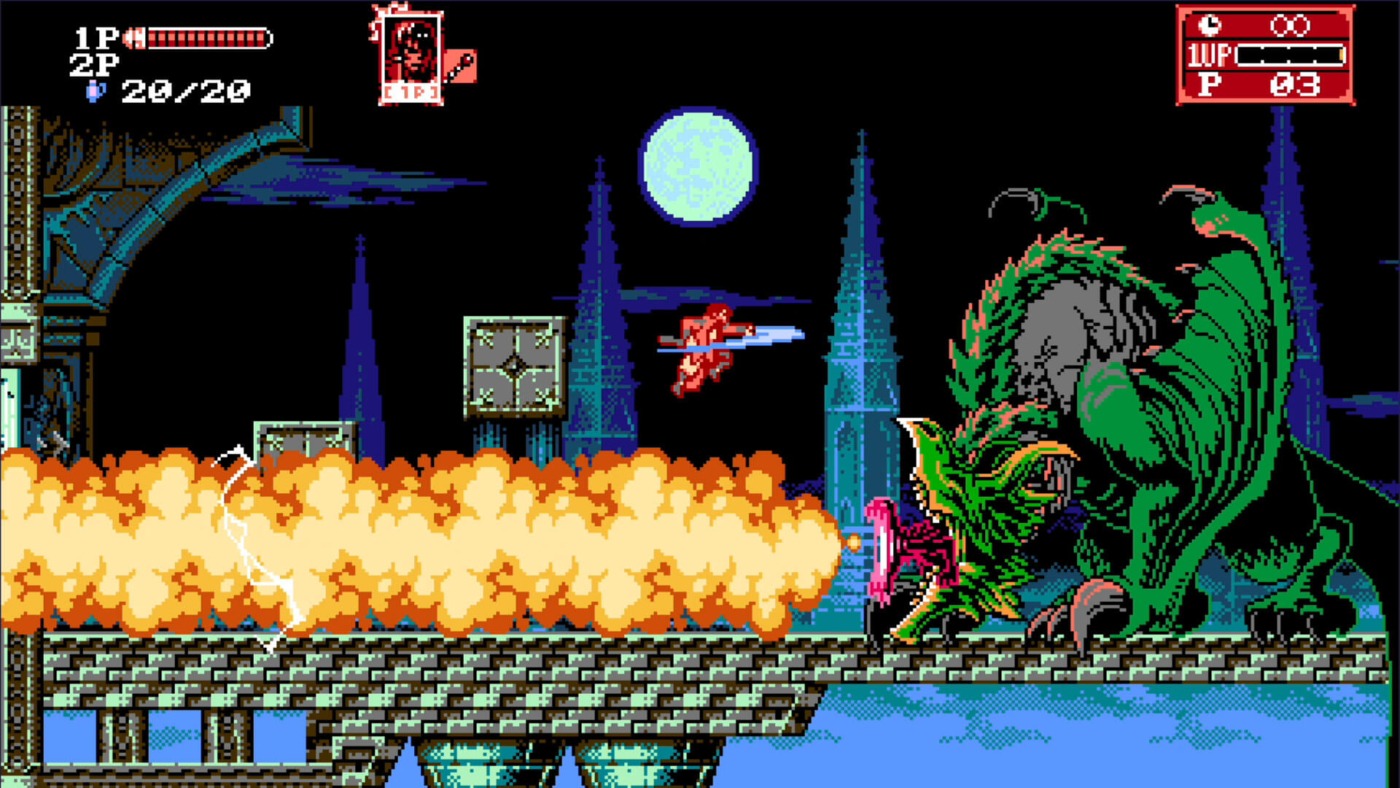 Castlevania has been in a unique situation for a few years now. There have been some great ventures with the franchise, such as an excellent Netflix show, and the addition of the Belmonts to Super Smash Bros. Ultimate. Konami themselves, however, have done practically nothing to further the brand, a feeling Silent Hill fans know very well, with no new game announcements – save for a mobile game that was cancelled after one year of being active.

When series lead producer Koji Igarashi left the company, he devised his own series called Bloodstained, creating a Kickstarter for Bloodstained: Ritual of the Night, a game highly derivative of older, more explorative Castlevania titles like Symphony of the Night and Order of Ecclesia. The Kickstarter was an enormous success, and one of the stretch goals funded was an 8-Bit game made by Inti Creates that would harken back to classic side-scrolling Castlevania: the amazing Curse of the Moon.

Curse of the Moon 2 introduces three brand-new playable characters to the roster on top of mainstay Zangetsu. Zangetsu is a fairly basic character who uses a short-range Katana, though his abilities can be enhanced through acquiring a special sword, providing the same level of enhanced mobility he could achieve in the first game.

Dominique, a priest, uses a lance and can attack enemies from far away. Her sub-weapons are useful in dealing with annoying enemies on ceilings, as well as reviving and healing other characters.

Robert, a sniper, is great for hitting enemies from a long-range, and can be useful with his wall jump ability, but his fragility and reload times make him almost useless for boss fights.

Hachi the Corgi is a dog in a mech suit (no, I’m not joking) that can briefly hover, avoid terrain hazards, and temporarily become invincible.

Curse of the Moon 2 only needed to bring new characters and levels to the table, and it does so very well

On top of the new characters, the previous group from the first game are also playable later in the game, allowing for a whopping seven characters to be controlled whenever the player sees fit. Character-swapping is still as simple as pressing a button, and each character still has their own health bars, which makes harder sections easier to deal with, as you only lose a life after every character has died.

There are still permanent stat upgrades to find throughout the stages that require the use of specific character abilities, and boss fights have a new mechanic where they will retain some damage from previous attempts if other characters die until you lose a life. All of this means that you should find at least a few characters that you feel comfortable with, especially as later on, you can unlock a mode where you can play the entire game solely as one specific character if you so choose.

The game offers both Veteran and Casual difficulties. Veteran retains the limited lives mechanic and knockback seen in older Castlevania games, whereas Casual removes these elements. I played on Casual, yet the game was still able to present challenging platforming segments and boss fights.

The sprite work and music are also excellent, and while I didn’t find the music especially memorable, it really captured the classic Castlevania mood.

Curse of the Moon 2 only needed to bring new characters and levels to the table, and it does so very well. The game takes between 1-2 hours to finish on a normal playthrough, but the game offers four different main scenarios to experience if you want the whole story, which brings the playtime up significantly, especially if you hunt down every upgrade.