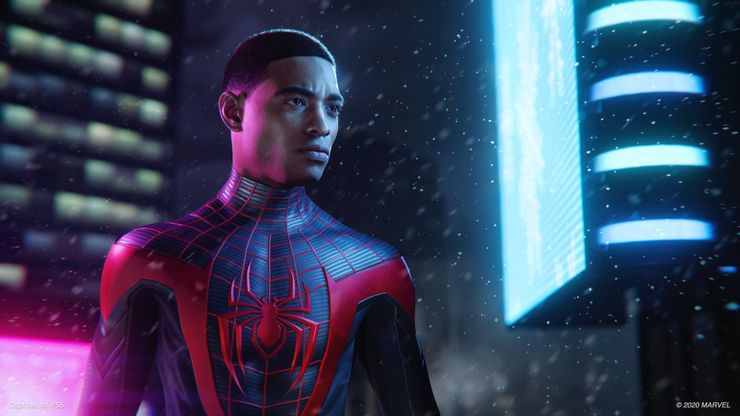 Spider-Man PS4 was a brilliant game. Its fighting and web-slinging mechanics were incredibly polished, contributing towards the best representation of Spider-Man in any video games we’ve seen up to now (sorry, Spider-Man 2).

However, it is not without its problems. Critics can debate the various merits and issues of Spider-Man PS4’s sidequests and busywork, but one huge, gaping flaw always stood out to me as one that Insomniac failed to address: they made Spider-Man a cop.

I mean this in the figurative sense, but lots of Peter’s motivations for driving the plot forward or intervening in crime came from his cosiness with the NYPD. The classic open-world towers that reveal more of the map were surveillance towers, used by the police in the real City of New York to monitor their citizens, making Spider-Man implicit in what is at least a morally grey area: which doesn’t seem like a very ‘neighbourhood friendly’ thing to do.

Aside from contributing to a surveillance state, many of the sidequests see you breaking up ‘thug’ activity, such as street-level drug deals on behalf of the police. Of course, this involved brutally beating up all those involved, before swinging back into New York with a sly quip.

The only time Peter ever does question who he is working for is when Sable, a private-military organisation contracted by the city of New York, start running detention camps around the city.

Dismissing the need for any opposition to the police within Spider-Man: Miles Morales because ‘it’s just a video game’ is a sign of privilege

No matter how you felt about ‘Spider-Cop’ when Insomniac’s Spider-Man first came out in 2018, two years later, on the back of the reveal of Spider-Man: Miles Morales, and the reinvigorated wave of Black Lives Matter protests, the narrative is even more out-of-touch with reality.

This is where Spider-Man: Miles Morales comes in, as it gives Insomniac the chance to address this problem, and send a message that their Spider-Man games are not just ‘Copaganda’.

It may be too late in the game’s development to make any drastic narrative choices that offer a robust social commentary or critical analysis of how Peter Parker behaved in the first game (which could work in the actual sequel), but I would expect Insomniac to acknowledge that Miles Morales as Spider-Man would not act in the same way as Peter Parker would, blindly following the orders of police to take down ‘thugs’ on the streets of New York.

While Miles’ father was a police officer, there is no doubt that in reality, the Miles Morales now living in Harlem would be treated differently than Peter is by the NYPD, and would also have a very different perception of how the police operate.

Many of the sidequests see you breaking up ‘thug’ activity, such as street-level drug deals on behalf of the police

Of course, there is already a growing number of gamers opposed to Insomniac criticising the police and status quo within their games. Dismissing the need for any opposition to the police within Spider-Man: Miles Morales because ‘it’s just a video game’ is a sign of privilege. It means that you have played Spider-Man PS4, a title that prides itself on accurately portraying New York City, and not seen any issues with its depiction.

I am not a games developer, nor do I intend to claim I have any authority on how studios should make their games, or how the stories of black characters are told. But I do know that if Insomniac releases the upcoming Spider-Man: Miles Morales game without acknowledging the wider systemic issues that affect Miles, a young Afro-Latinx man, then not only will their game suffer from failing to depict the reality of which Spider-Man would exist in, but I seriously question who is in the room making those decisions.