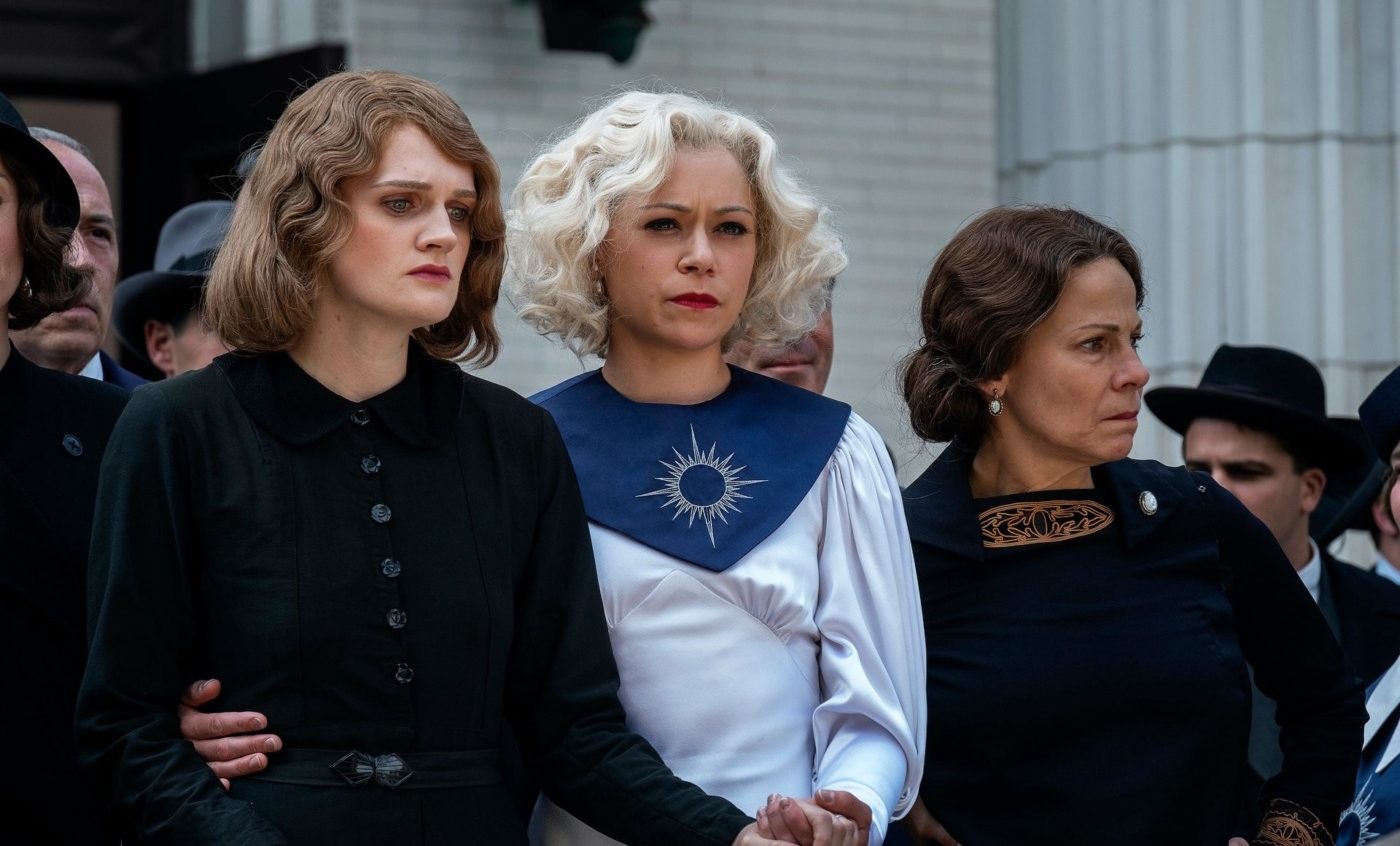 First episodes of a show are always big and full of bombast, but it’s the job of the second to keep you engaged. I mention this in relation to Perry Mason because, somewhat unusually in the world of TV, the second episode is a little better than the first. With the world and our key characters established, ‘Chapter Two’ explores them to great effect. My major gripes with the first episode – that it was a little too excessive on the sex and violence, and that the main character didn’t really feel like Perry Mason – are gone. ‘Chapter Two’ is a step up and, now the real expository work is out of the way, I’m looking forward to seeing where it goes.

‘Chapter Two’ introduces some more key players, and every one of them makes a big impact (some of them with quite limited time on screen). Tatiana Maslany (best known for Orphan Black) makes her foreshadowed appearance as Sister Alice, an evangelist who makes a grand entrance, condemning society’s sinners – she absolutely shines in every moment, and an outburst in the episode’s final sequences suggests there may be a lot going on. She’s flanked by Lili Taylor as her mother, proudly testifying and looking shifty when she’s offstage. On the subject of shifty, Stephen Root plays it slick as district attorney Maynard Barnes, less interesting in the truth than his victory in court.

‘Chapter Two’ is a step up and, now the real expository work is out of the way, I’m looking forward to seeing where it goes

The most important new addition is the final member of the Perry Mason trifecta, Paul Drake (in the books and TV show, Mason’s preferred private investigator). Played by Chris Chalk, this incarnation of Drake is a beat cop, one of the city’s first black officers. He’s clearly a good detective, figuring out some of the clues in the murder scene left behind by Detective Ennis (Andrew Howard), yet he is marginalised by his superiors (on account of his colour and his experience). He hasn’t yet met Mason, but I’m looking forward to the interplay between the two.

We have lots of strong character work, but the episode balances that nicely with advancing the case. The opening scene sees Mason heading into a shop full of thread in the hopes of matching the material that was used to stitch Charlie Dodson’s eyes, and it’s indicative of the level of beat work and detail that he puts into his investigations. This, and a hunch about Emily Dodson, pays off in the revelation that one of the kidnappers may have been a little closer to home than expected. Mason makes his way to an empty house, discovering the car and another grisly crime scene, rendered in all its unpleasant glory.

He and his partner Pete Strickland (Shea Whigham) take the evidence they discover to E.B. Jonathan, a lawyer clearly in the mould of the one that Mason must eventually become. Rhys and Lithgow share some delightfully uncomfortable scenes as they argue about how to play events (on that note, I hope we’ll see a bit of courtroom action between Lithgow and Root – that should be a showstopper). We get a sense of Mason’s character evolving, or at least being a little more open about his motivations – sure, he may be doing a job, but he’s also looking to do what’s right. It’s a nice glimmer of hope in what is a fairly dark story, both figuratively and literally – the muted colours really convey a lot.

Last episode, I wondered if there was enough to sustain this run but, with the new additions here, my new question is how deep we’ll go

Mason’s backstory is expanded in ‘Chapter Two’, and the episode opens with a hugely effective flashback set in the trenches of World War I. They’re expertly shot and really intense and, although we obviously know that Mason will make it out, there’s a palpable feeling of danger. But it’s not about whether he will survive, so much as it is the choices he makes in the process, and how he’ll have to live with them. It’s not the Mason we knew, so it’s a testament to Rhys’ acting that he conveys so much in his actions. What he leaves unsaid says a lot about the detective.

We leave ‘Chapter Two’ with a new suspect in custody, and several interesting plot avenues to explore as we go forward. The cast shine again and the mystery remains interesting – I’m genuinely curious to see what happens next and how events will pan out. Last episode, I wondered if there was enough to sustain this run but, with the new additions here, my new question is how deep we’ll go.