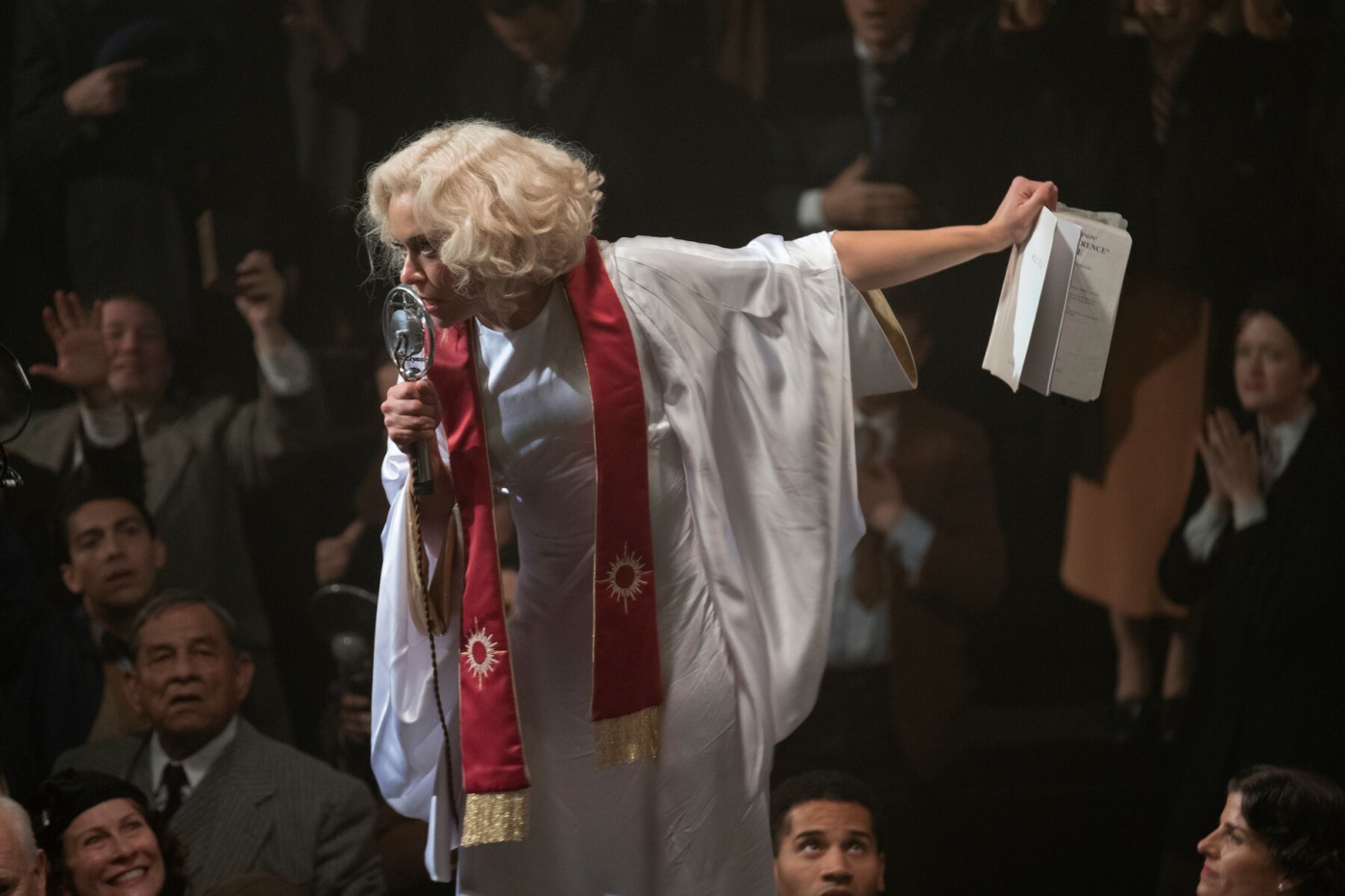 A major upheaval in our characters’ lives leads to another packed episode of Perry Mason. In ‘Chapter Five’, events start to point to the inevitable courtroom climax, but we get a lot of sterling character work on the way.

In the aftermath of Jonathan’s suicide, both Mason and Della are in shock. They travel with the coffin up to Jonathan’s home, and Mason sees it as an opportunity to attempt to reconnect with his ex-wife Linda (Gretchen Mol) and his son. Della is occupied with attempting to find new legal representation for Emily Dodson, and must face a mole – the court-appointed attorney Frank Dillon (Matt Malloy), a man with more than a few connections to DA Barnes. Meanwhile, Sister Alice begins to exert her authority at the church, demanding that some funds are used to help post Emily’s bail. As momentum builds both for and against her, and the date of Charlie’s resurrection draws ever nearer, will she be able to perform a miracle?

The chemistry between Rhys and Rylance has never been better, particularly in the show’s opening scene – silently, they say so much

With Jonathan gone, this episode really allows Della (and Juliet Rylance) to step up and take action, giving us a new burst of energy. After a painful experience at Jonathan’s funeral (in a genius bit of casting, the lawyer’s son is played by Lithgow’s real-life son Ian), Della faces up to saving Emily on her own. She faces Dillon, who is obstructive and corrupt and a means for Barnes to discover what Jonathan’s defence was going to be, and defeats him. Della’s relationship with Mason has evolved as a result of Jonathan’s death, and after Mason shares an awkward encounter with his ex-wife, they realise they need to stand together. The chemistry between Rhys and Rylance has never been better, particularly in the show’s opening scene – silently, they say so much.

We return to the church of the Radiant Light for a couple of brilliant scenes. Sister Alice faces off against her mother, a battle of stony smiles, and Lili Taylor manages to channel both concern and resentment for her daughter. But it’s a later moment that really does it. Sister Alice leads a fevered congregation as she attempts to help a lame man walk, and it’s hard not to get caught up in the spirit of the event. Maslany is a compelling screen presence and she really sells these set-pieces – I entirely buy her as the preacher who uplifts a community. But, in-universe, she is inspiring a hugely mixed response. Emily has placed her faith in Sister Alice, hoping beyond hope that she will resurrect Charlie, but Elder Brown (David Wilson Barnes) is now testifying on the sidewalks about her blasphemy. I really don’t know where this is heading, or how it all links in, and I’m very excited to see what happens.

‘Chapter Five’ is building to the point that we all knew was coming, but it doesn’t make it any less exciting. Having exhausted every possibility for Emily (because, as a friend tells her, the case is a preordained loser), Della and Mason confer. When Mason hits his breaking point and begins a fiery rant about the situation, Della sees what he could become. It’s a small scene but a beautifully-acted and exhilarating one, putting Mason on the path to becoming a lawyer. And, on the way, he meets another figure who will be all too familiar to fans of the books or earlier series – Mason’s mentor is the deputy district attorney, Hamilton Burger (Justin Kirk). It was perhaps a little too rapid, and I think Terence Blanchard missed a trick by not hinting at the original Perry Mason theme in his fantastic score, but these are small niggles.

At its heart, Perry Mason is a courtroom drama and you just know that Rhys’ Mason is going to excel in these scenes

Amid the two major storylines, there are a few scenes for our other characters. Strickland is investigating Ennis, and after the detective tries to fob him off with some lies, he reveals his findings to Mason. Ennis’ appearances at every Dodson case-related crime scene is too much of a coincidence, and Strickland wants to help prove it. We’ve already lost one main character, and it feels like Strickland is really putting a target on his back. Drake returns, meanwhile, for a couple of scenes unrelated to the main plotline again. He attends a church debate on racial equality through action, and is forced off a beach by a white police officer. Chris Chalk shares a wonderful scene with Diarra Kilpatrick (as Drake’s wife), but he is still too disconnected from everyone else – we need to bring him in and get a sense of how he’ll eventually become his preordained character.

This episode concludes with Mason taking the pledge to fight for legal justice, and it sets up an exciting few chapters ahead. At its heart, Perry Mason is a courtroom drama and you just know that Rhys’ Mason is going to excel in these scenes. With a lot of plot threads still hanging, and the relationship between Rylance and Rhys never better, the show is continuing on its upward trajectory.