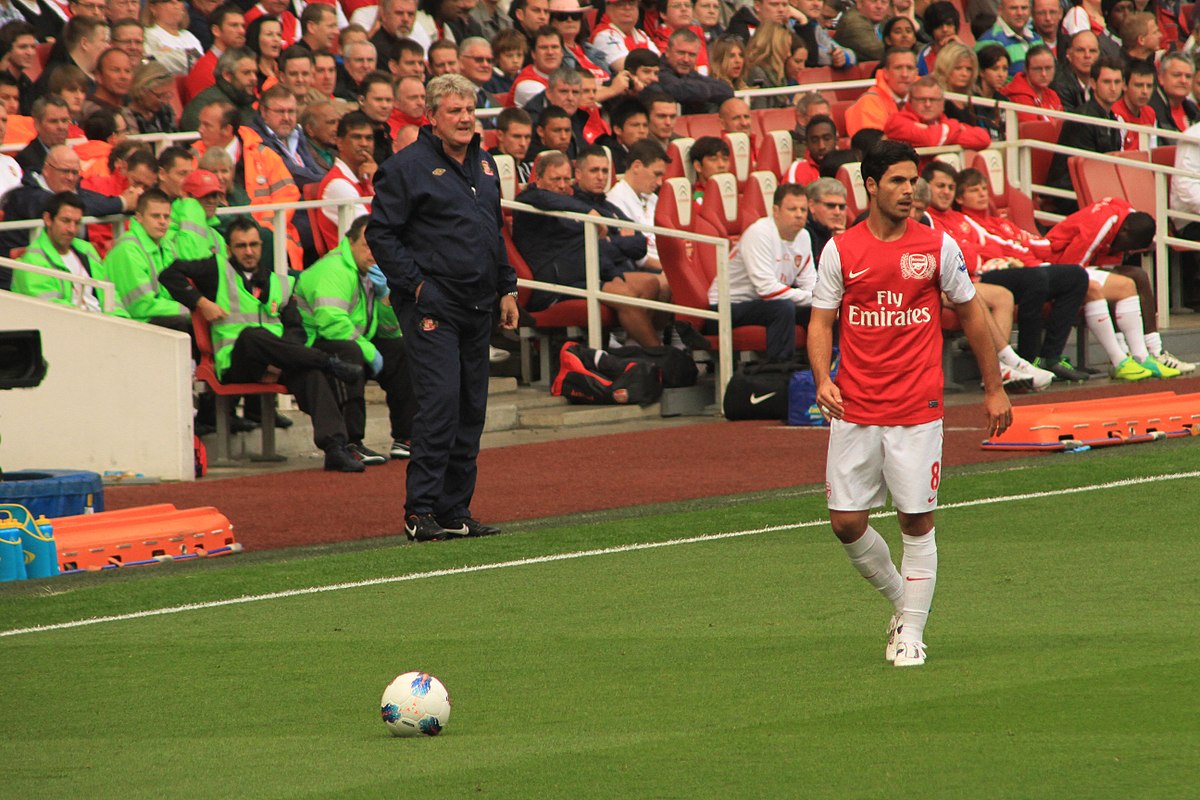 In recent weeks coverage of Arsenal has gone from revolution to crisis and back to revolution again. But underneath the media narrative, there has been a decisive shift in Mikel Arteta’s tactics, with the Arsenal manager opting to play with a back three.

While its inherent fluidity means it is difficult to pin Arteta’s team to a specific formation,

Arsenal usually lined-up in a 4-2-3-1 shape before the break. Pre-lockdown, Arsenal’s shape would often become something of a 2-3-5 in possession, as the right-back joined the defensive midfield zone and the left-back overlapped to become a fifth attacker.

However, since Arsenal’s third trip of the restart to Southampton, the Gunners have shifted to a 3-4-3. This system involves three centre backs covering the width of the pitch; a technical central midfield duo (often Dani Ceballos and Granit Xhaka); a pair of wing-backs; and a front three that press opponents high up the pitch.

The major difference with the previous system is that it gives Arsenal an extra man in the defensive zone, giving greater control of play at the back. In turn, having greater numbers at the back limits the space that Arsenal’s centre backs have to cover, cutting out the opportunity for the defensive errors that have so plagued the Gunners’ for many years.

A further important reason for Arteta’s switch is that many of his opponents in recent weeks also started with a back three. This included tricky visits to Sheffield United and Wolves which were greatly mitigated by matching these teams up on the flanks.

This is not the first time that an Arsenal boss has chosen a back-three as the panacea for Arsenal’s problems at the back. Arteta’s predecessor Unai Emery regularly switched from a back-four to a back-three, most successfully (all relative in the Emery era) in the latter half of the 2018-19 season.

This saw a run to the Europa League Final which featured impressive uses of the back three against Napoli and Valencia as well as victories at home to Chelsea and Manchester United while Arsenal fell short of Champions League qualification.

Arteta will be hoping that he can shift Arsenal’s fortunes

However, the most striking parallel with this switch was made by the man who brought Arteta to Arsenal as a player, Arsène Wenger. As Arsenal struggled towards the end of the 2016-17 season Wenger followed the lead of Antonio Conte’s successful Chelsea team that season in opting for a back-three for the final run of tough fixtures.

Wenger’s switch dramatically improved Arsenal’s performances, with the side winning nine out of the final 10 games, including an FA Cup final win against the Champions. Arteta will be hoping that by making the same switch he can shift Arsenal’s fortunes in the league and try to lead the side to FA Cup glory.

The switch of system the latest chapter of a dominant story of the Arteta era: the need to first rebuild Arsenal by fixing the defence.

This is starkly illustrated by the basic statistics behind the football. Helpfully, Arsenal have played an even number of games before and after Arteta, 17. In the 17 games of the Arteta era, Arsenal have scored just two extra goals than they did under Emery, increasing from 24 to 26. However, the drastic change has come in the goals conceded column, which has fallen from 28 to 14.

Examples of this have been when forwards have pressed an opponents

Although enhanced by the change to a back-three, improvements to Arsenal’s backline were very clear from day one. These successful changes have mostly been the result of effective ‘positional play’, with Arteta building a very coherent defensive shape in both systems, covering space far better and preventing counter-attacks. This positional play has resulted in far better defensive performances from both David Luiz and Shkodran Mustafi, who, despite some high-profile errors, have markedly improved under Arteta.

However, it would be a mistake to attribute Arsenal’s defensive success exclusively to its defenders. In an Arteta side, all players are responsible for attacking through passing and build-up play, all players are tasked with pressing their opponents to win the ball back.

The Gunners’ pace upfront has helped greatly in this task, resulting in opponents being pressured into mistakes and creating attacking opportunities for Arsenal. The two most stark examples of this have been when Arsenal forwards have pressed an opponents’ ‘keeper, with Eddie Nkeitah at Southampton and Pierre-Emerick Aubameyang against Norwich, both pressing to force mistakes that resulted in a goal.

In spite of this remarkable progress, Arsenal have not been perfect defensively under Mikel Arteta. In particular, set pieces have continued to prove a perennial issue. Similarly, Arteta has not been able to entirely coach the defensive errors out of his defenders, resulting in catastrophes like Luiz’s recent performance at the Etihad.

But to put it in perspective, Arsenal are missing two of their more solid centre-backs, Calum Chambers and Pablo Mari both of whom are well-liked Arteta thanks to their ball-playing ability. In addition, the Gunners are without rising star William Saliba who has returned to St Etienne on loan.

It is likely that as they return Arsenal’s defence will look even more solid. And then Arteta can work on the attack!