“WAKE UP!” shouts Lawrence Fishburne’s Dap as the final words of Spike Lee’s 1988 School Daze. They’re also the first words spoken in his 1989 masterpiece Do the Right Thing. Thirty years later, that film, the filmmaker and those words are still just as relevant and important as they ever were.

Do the Right Thing takes place on the hottest day of the year in a Brooklyn neighbourhood. The heat practically drips off the screen. Public Enemy blasts through the soundtrack. Radio Raheem preaches Love & Hate with his fists. Sal owns a pizzeria and refuses to have any pictures of black people on the wall. Racial tensions begin to boil over. Mookie throws a trash can through a window. At the time, white critics heavily questioned and debated what the ‘right thing’ was. Hopefully in the present day, the answer is a little more obvious. Do the Right Thing is perhaps the most important American film released within the second half of the 20th century. Naturally, the Academy Awards ignored it, instead giving the Oscar for Best Picture to another piece that deals with issues of racism: Driving Miss Daisy. Very much the ‘All Lives Matter’, the “I’m not racist, I have a black friend” of 1989 race relations movies.

Regardless, Do the Right Thing cemented Spike Lee as one of the most important filmmakers of his time. He was portraying an America to which most were blind, an integral voice in showing the black experience on cinema screens. A musical about a jazz musician in the form of Mo’ Better Blues followed, as did Jungle Fever, which explored an interracial love affair and the surrounding reaction from family and friends in the community. But it was Lee’s next film, a biopic detailing the life of civil rights activist Malcolm X, that would demonstrate the power and ambition of a Spike Lee joint.

Spike Lee is passionate and angry. We should all be. It’s necessary

Malcolm X, bolstered by an astounding portrayal by Denzel Washington, depicts the figure, the leader and the man. It’s a deeply personal epic, on the same size and scale as anything ever produced by David Lean. From the moment the first reel starts, Lee’s perspective is known. An image of an American flag is accompanied by a speech read by Malcolm X: “Brothers and sisters, I am here to tell you that I charge the white man. I charge the white man with being the greatest murderer on earth…”. As the speech continues, the flag is intercut with footage of Rodney King being brutalised by white police officers. The flag is set a light by fire, burning until it forms an ‘X’. “We don’t see any American Dream. We’ve experienced only the American Nightmare!” Spike Lee is passionate and angry. We should all be. It’s necessary.

His films are centred around black people and the black experience in America, an experience most can never understand, one that most aren’t even willing to. But this is not limited to films centred around racial tension, and to focus solely on this work is to ignore and dismiss plenty of essential films. School Daze, for example, is a musical depicting the Homecoming weekend at a historically black college. Crooklyn, an undeniably charming film, focuses on a family living in Brooklyn, centred around the only daughter in the family, nine year old Troy. Both films are an unfortunate anomaly. Count how many coming of age films you’ve seen centred around black people, and call me when you get to twenty. Clockers, a gritty drama focusing on a young drug pusher in the projects caught up in a murder, is for all intents and purposes Lee’s Rashomon. Miracle at St Anna is a war film like few others: it’s protagonists are black soldiers in World War 2, an element of that war seemingly glossed over in history books. Summer of Sam brings forth Lee’s passion for his community, exploring an Italian-American neighbourhood affected by the 1977 ‘Son of Sam’ murders.

Get on the Bus centres around a bus travelling from LA to Washington, DC for the historic Million Man March. All the men have histories, they all have lives lived and they all have stories to tell. Stories that are seldom told. Matters of intersectionality are brought to attention, as the passengers clash with beliefs, politics, and occupations. Yet the film is ultimately a celebration, with a lining of hope. Shot largely with handheld photography, the film is a highly personal and intimate one. There’s a key line in Get on the Bus revolving around the depiction of black communities in Hollywood: “The four Rs: Rap, Rape, Rob and Riot.” Lee’s films rarely conform to such stereotypical and reductive depictions.

It’s hard to pinpoint the exact reason why people are so hostile towards Spike Lee joints. A common complaint is his style, though when put under scrutiny it’s clear that such a reason is bullshit. His style is playful when it needs to be: bright, colourful and positioning the camera specifically, yet unafraid to be confrontational and purposeful. His signature shot, and probably my personal favourite signature of any director, is the double-dolly. Positioning both the actor and the camera on a dolly, it creates an effect that makes the characters appear to be floating or gliding. Critics often complain that it takes viewers out of the film, yet Lee never overuses or abuses the shot. He uses it for key character moments or beats, encompassing a character or elevating them to higher status. His filmmaking style is always in service of his stories and themes, ones that are always necessary. Come to think of it, I wish the reason for such hostility and disregard aimed towards Lee wasn’t so obvious.

2000’s Bamboozled is Spike Lee’s unapologetic masterpiece. Tired of the fact that none of his pitches ever make it to air, Damon Wayans’ TV writer creates a modern day minstrel show. Depressingly it’s a ratings hit, taking the entire United States of Amerikkka by storm. The country is revealed to be more than happy to indulge in blackface and racist caricatures. Throughout, systematic racism that consumes this world like a plague is front and centre, with a montage towards the end exposing the mass media’s exploitation and commodification of black bodies. By shooting with digital video, the events are only more immediate and shocking. Unsurprisingly, Bamboozled was a critical and commercial flop, considered too controversial and uncomfortable. It was released the same year Jimmy Fallon did blackface on SNL. Twitter’s recent attempt at cancelling Jimmy Fallon isn’t as progressive as we’d like to think. This wasn’t some hidden artefact that needed to be dug up, it was in plain sight on national television. The very same network gave Fallon the legendary Tonight Show. The accusations of Lee’s film being “too over-the-top” in its satire are cowardly and ignorant.

It’s perhaps no coincidence that the first Spike Lee joint to be given its proper due was 2018’s BlackKklansman. The film is easily digestible entertainment for the most part, playing like a ’70s cop movie with sprinklings of a Blaxploitation flick. It’s not until the final moments that Lee’s anger bursts. Following an iconic double-dolly shot, the audience bears witness to a montage of modern day white supremacists and Nazis marching. Suddenly the events of the film set in the ’70s don’t seem so far in the past. Confronted by contemporary images of Charlottesville, white people can no longer ignore the prevalent racism. Of course, history couldn’t resist repeating itself, and so the Academy awarded the Best Picture Oscar to Green Book, very much the ‘All Lives Matter’, the “I’m not racist, I have a black friend” of 2018 race relation movies. Spike Lee deserved recognition, but he did so years ago. Spike Lee deserved the attention and acclaim. If only we noticed earlier. His films haven’t changed. His art hasn’t changed. But we have.

Spike Lee is undoubtably one of the greatest to ever pick up a camera. Watch his films, study his films, learn from his films. It’s been over thirty years since he started making films, and people still “need to check that alarm clock.” WAKE UP! Black Lives Matter. 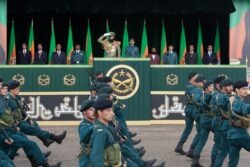 The history of politics in film: from ‘Birth of a Nation’ to ‘Borat’