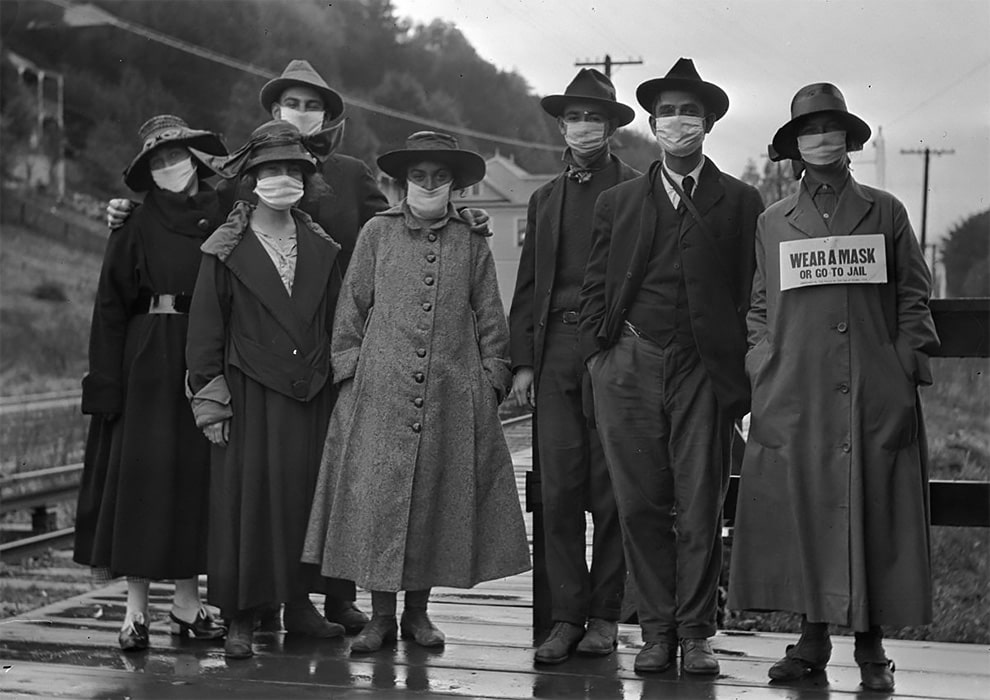 Pandemics have ravaged the human race since records began. Yet, prior to the outbreak of Coronavirus, the general population, particularly in the West, was strangely oblivious to the threat a major outbreak of a new contagion could pose.

Throughout history, nothing has killed more people than infectious disease.

The Spanish flu in 1918 killed more than the war which preceded it, with estimates suggesting that between 50 to 100 million people died from it globally.This influenza outbreak was particularly damaging because it seemed to target 20-40 year olds, society’s breadwinners, accentuating the poverty already being felt post-war in many countries.

As is the case with many pandemics throughout history, including today’s Coronavirus, it disproportionately affected the poorest and most vulnerable in society. Those living in close proximity, in crowded cities as opposed to more rural areas, were also more likely to be affected.

In the US, responses to the Spanish flu outbreak varied significantly between cities. A 2007 study found that in those which implemented social-distancing measures early, compared to those that did late or not at all, the death rate was around 50% lower.

Many of the policies being used today to deal with Covid stemmed from this and earlier pandemics, most notably the plague, which helped to drive developments such as quarantine itself, travel bans, the first public hospitals and the first public health offices.

Since the Plague of Justinian in the 6th century, a series of outbreaks of the virus, linked to the bacterium Yersinia Pestis have occurred around the world.The most deadly pandemic ever recorded was the Black Death in the 14th Century, which is thought to have killed between 75-200 million people globally during that period. During its peak, which occurred in Europe between 1347-1351, historians estimate it killed between a quarter and a third of the continent’s population.

More recently, Human Immunodeficiency Virus, or HIV, has claimed the lives of more than 32 million people since records began in 1981.

It was first identified in 1976 in the Democratic Republic of Congo, transmitted from monkeys to humans, and continues to be most prevalent in Africa where two thirds of the cases are today.

If left untreated, the virus, which attacks and alters the immune system, leaves the infected person susceptible to Opportunistic Infections (OIs), which include a range of often deadly diseases, infections and cancers. At this stage HIV patients are diagnosed with Acquired Immunodeficiency Syndrome (AIDS), however the number progressing to this stage has decreased significantly in recent years.

The organisation highlights the heightened risk among marginalised and vulnerable groups

Those living in the poorest areas are also the most likely to lack access to healthcare and tests, and as such are more likely to go untreated. Therefore, despite the development of effective treatments meaning that around 37.9 million people are now living with the disease and the gap reducing between patients’ and the rest of the populations’ life expectancy, it is still classed as a pandemic and continues to spread across the globe.

So, if pandemics have been so prevalent throughout history, and even continue to be to this day, why were some countries seemingly unprepared for the spread of a new aggressive virus?

The initial downplaying of the threat by some Western politicians, most notably US President Donald Trump, evidences the slow action and arrogance demonstrated by some Western nations. The confusion whipped up by US and UK policy has also meant that the pandemic has spread further in these countries. If pandemics throughout history have shown anything it’s that they thrive on the complacency and the continuation of normal life.

For example, Dubrovnik’s invention and effective implementation of quarantine from 1377 meant the plague was eradicated from the city by 1533, while it continued to beleaguer the Balkans, Eastern Europe and Marseilles well into the 18th century, and North Africa and the Middle East for even longer.

China and its neighbouring countries, including South Korea, Taiwan and Hong Kong, also arguably recognised the need to engage early on to stem the tide of the virus, drawing on their experiences from the 2003 SARS outbreak. Following this outbreak, practices such as the wearing of face masks and frequent hand-washing became the norm in many Southeast Asian countries, and governments in the region began to invest more heavily in public health, with China’s investment tripling in a matter of years.

This preparedness allowed quick action, with China shutting down the cities where outbreaks occurred and strictly monitoring international and internal travel. If government figures are to be believed, the number of daily new cases was brought down from thousands earlier in the year to none for the first time on 22 May.

This preparedness allowed quick action, with China shutting down the cities where outbreaks occurred and strictly monitoring international and internal travel

In a study conducted by the Telegraph, contrary to Asian countries’ focus on containment  “in a bid to minimise mortality”, the UK Influenza Pandemic Preparedness Strategy suggests in its guidance, updated following the swine flu pandemic that; “It will not be possible to stop the spread of, or to eradicate, the pandemic influenza virus, either in the country of origin or in the UK, as it will spread too rapidly and too widely”.

This strategy has been criticised as “fatalistic”; the idea that the virus cannot be stopped and is instead something people need to adapt to and live alongside, can potentially be linked to the rising death tolls in the UK, US and other Western countries.

Linking to this, historians suggest that pandemics end one of two ways; either through a vaccine or for social reasons. Popular fatigue around social restrictions and quarantine more specifically has existed since its invention, with states having to enforce them stringently, or bend to public will and relax them.

So, if lessons can be learnt from pandemics of the past, what can be expected of future outbreaks?

Deputy director at the Wuhan Institute of Virology, Shi Zhengli, whose research into horseshoe bats as potential carriers for SARS-related pathogens proved controversial, warns that more research needs to be done into the the spread of viruses from wild animals to humans if future pandemics are to be prevented.

In an interview on Chinese state television, Shi said that viruses being discovered currently, such as Covid-19, are “just the tip of the iceberg”, and called for international cooperation to prevent similar, potentially worse outbreaks.

In the near-term, experts in the US and Europe have warned that new waves of Coronavirus could prove “even more difficult” than the first, anticipating a second in the winter of 2020/21.

This has been the case historically, with the second wave of the Spanish flu being the deadliest, killing around 50 million people.

Infectious disease expert Dr Amesh A. Adalja has highlighted that the lack of a vaccine could mean that by autumn, when seasonal flu outbreaks begin to rise, the virus, combined with this could cause even more deaths than it has in the first wave.

Fresh peaks of the virus have already occurred, even in states such as Singapore who followed strict lockdown procedures, most often amongst those in the poorest and most populated areas, as has always been the case.

While countries across the world are easing their lockdowns, experts are warning that the worst could be yet to come. The top WHO official in Europe, Dr Hans Kluge, warned countries starting to come out of lockdown at the end of May, such as Italy, France and the UK, that now is the “time for preparation, not celebration”.

While countries across the world are easing their lockdowns, experts are warning that the worst could be yet to come

Stockpiling PPE, testing and tracing, instructing whole populations to quarantine and social-distance, to maintain their hygiene and to refrain from travel in or out of a country, have so far proven the most effective methods, but require governments to be prepared to take seriously intrusive and economically damaging action.

By looking at examples of pandemics throughout history, as well as the course the current virus is following, it is clear that preparedness is the only option to effectively tackle Coronavirus.