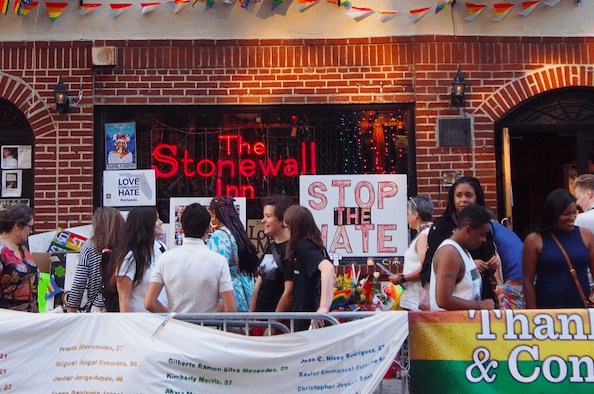 The history of Pride Month begins in 1969 with the Stonewall Uprising in New York City. On June 28th, 1969, police raided the Stonewall Inn, a popular gay club in Greenwich Village, Manhattan. Throughout the 1960s, members of the LGBTQ+ community faced extreme levels of public and private discrimination. The public display of affection between members of the same sex was illegal in New York City and, up until 1966, the New York State Liquor Authority prohibited the sale of alcohol to members of the LGBTQ+ community.

Police raids were common, and very often violent. The owners of the Stonewall Inn were members of the American Mafia. They owned the majority of gay clubs and bars in Greenwich Village, profiting off of LGBTQ+ clients. To avoid prosecution, the Genovese family bribed the New York Sixth Police Precinct to turn a blind eye to the events happening inside their bar.

Thirteen people were arrested that night

During the early hours of 28 June 1969, Detective Charles Smythe and Deputy Inspector Seymour Pine entered the building alongside six other police officers. At this time, around 205 people were inside the bar. The police blocked all the exits, trapping everyone inside. A standard protocol for police raids was to check the identification of the club’s patrons and employees. Female police officers were often told to physically examine anyone thought to be “cross-dressing”. These checks were extremely violating, and police officers often took advantage.

However, this time those inside the Stonewall Inn did something unexpected – they fought back. Anyone who hadn’t already been arrested waited outside the Stonewall Inn. In a few minutes, a crowd of between 100 and 150 people amassed outside the club, chanting “Gay Power!” and singing “We Shall Overcome”. At that moment, there was an intense mixture of pride and hostility towards the police. As the police tried to break up the crowd, fights broke out between officers and bystanders. The wagons used to transport those arrested to the police station were overturned, tyres were slashed and beer bottles were thrown. When the crowd outside the Stonewall Inn had reached between 500 and 600 people, the events became a public spectacle. 13 people were arrested, in a spontaneous act of resistance and solidarity.

Stonewall’s riots became a catalyst for the Gay Liberation Movement

The events of 28 June 1969 inspired a wave of riots outside the Stonewall Inn and in the surrounding area. The following night, thousands of people gathered in front of the bar, occupying the whole of Christopher Street. Violent altercations between police officers and rioters took place until the early hours of the morning and this level of unrest continued for another two nights.

Stonewall’s riots became a catalyst for the Gay Liberation Movement. In July 1969, the Gay Liberation Front was established to “continue the momentum of the Stonewall Uprising, and to demand an end to the persecution of homosexuals”. This led to the Revolutionary People’s Constitutional Convention in 1970 which united Black, Feminist and Gay Liberation movements to discuss civil rights.

On 28 June 1970, the Christopher Street Liberation Day commemorated the events of the Stonewall Uprising. Gay pride marches took place in New York, Los Angeles and Chicago – the first of their kind in US history. Within a year, the movement had spread to Boston, Dallas, Milwaukee, London, Paris and Stockholm. By 1972, gay rights groups existed in every major US city as well as Australia, Canada and Western Europe.

The legacy of Stonewall continues to inspire Pride movements across the world. This month, the LGBTQ+ community remembers the events of the uprising with pride. As an ally, I cannot fully understand the symbolic importance of these events, but the Stonewall Uprising offers hope to those facing oppression and discrimination on the basis of their sexual orientation. The history of Pride Month celebrates equality and social acceptance.