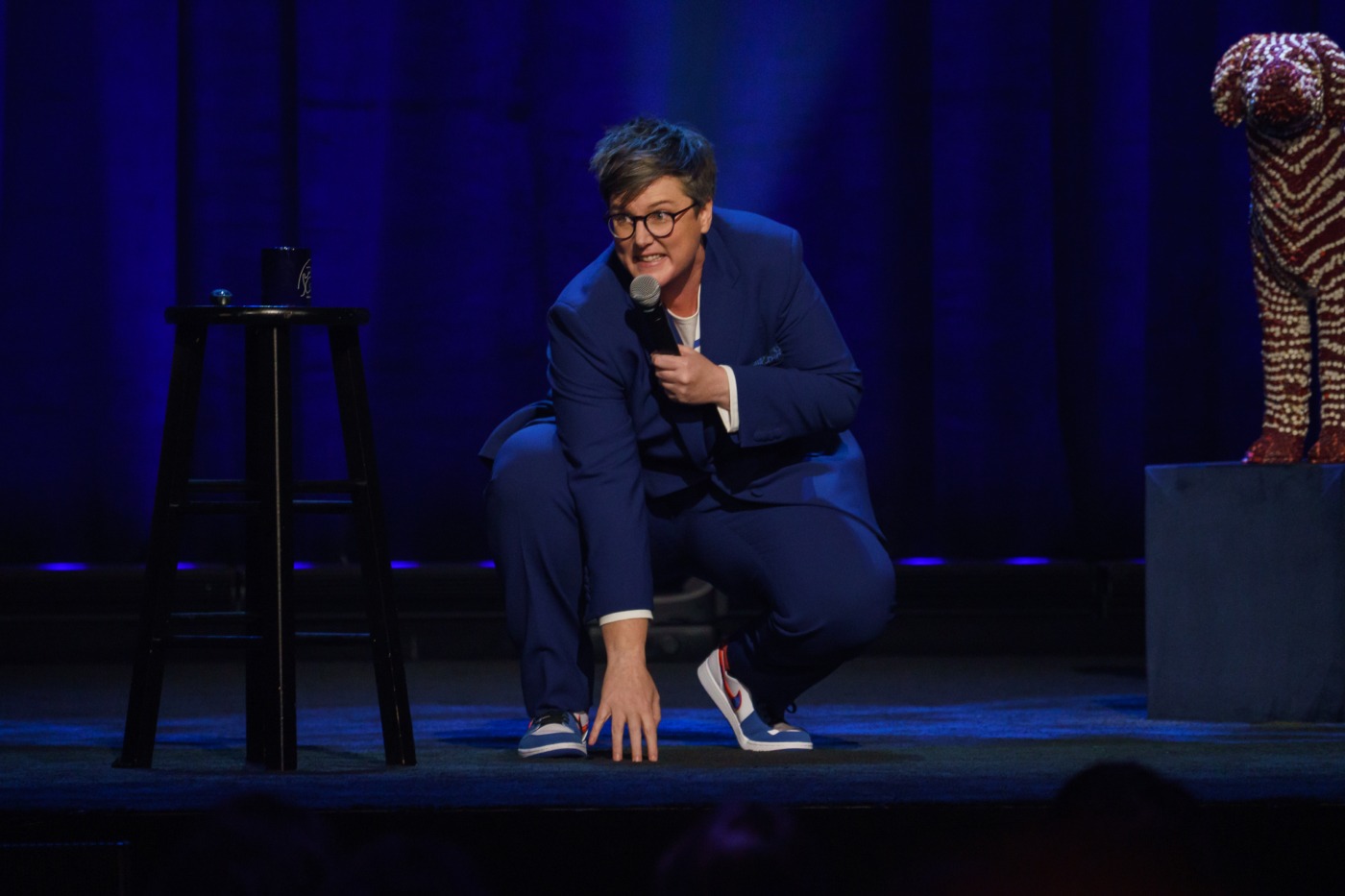 What is Douglas? A monologue? A one woman show? A ‘glorified TED talk’? A lecture?

All of these genres are what Hannah Gadsby’s ‘haters’ have tried to pigeonhole her Netflix breakout hit Nanette into. For the most part, Douglas doesn’t fit into any of those brackets. It explains why Gadsby deploys such self-deprecating confusion at the number of people in the audience who have come to see her after seeing Nanette. Douglas is a very different show.

The fact that Nanette wasn’t quite a standard comedy show, not really any kind of easily definable show, is perhaps one thing that made it so special. Perhaps it is better, however that Gadsby hasn’t tried to make the same thing twice.

“What are you expecting from this show?” she asks in the show’s opening. “If it’s more trauma, I’m fresh out.” As a result, Douglas is closer to a straight-up comedy show, but the loss of her more serious, hard-hitting reflective moments, however poignant they were, is not something to be mourned. This show is instead a reminder that at the root of it all, she is a comedian, and a very good one at that.

Douglas is closer to a straight-up comedy show, but the loss of her more serious, hard-hitting reflective moments, however poignant they were, is not something to be mourned

Much of this comedy falls into the category of observational comedy (despite Gadsby admitting to not being very observant), with the Tasmanian-born comedian ribbing her American audience over their Americanisms and later divulges her ‘puffer fish moments’ – ‘pet hates’ with a quirkier (and better) name. These include but aren’t limited to people on the Paleo diet, ‘Where’s Waldo’, and the ‘Teenage Mutant Ninja Turtles’, because they aren’t actually turtles (“They’re tortoises! Tortoises are the clomp-clomps, turtles are the flip-flips.”).

It’s pretty standard as observational comedy goes, but how often can you reinvent the wheel with that kind of comedy? Regardless, if we’re measuring its quality simply by asking, “Is it funny?” the answer is “Absolutely, yes”. The rich laughter of the audience is here for a reason. These jokes are well worthy of them.

Perhaps the funniest part of the show is an anecdote in a segment towards the end where Gadsby discusses her autism. She was only formally diagnosed four years ago but recounts a story from her school days about a lesson on prepositions that wasn’t taken in the way her teacher intended. It involves penguins, boxes and interrogations about eating said boxes. There’s an undertone of silliness in some of her humour that can easily raise a chortle or two – it’s accessible and easy to appreciate.

It’s not all trivial stuff, however. Something Gadsby has carried over from Nanette is what she calls ‘needling of the patriarchy’ that later turns into a ‘jousting’. There are jokes about ‘all of the men who have named all of the things’. There’s also a story about a doctor who became condescending when Gadsby refused to take the Pill as he recommended because it had made her suicidal when she had taken it before. As ‘needlings of the patriarchy’ go, it’s a very entertaining one – and who said that feminists couldn’t be funny? Equally, if you’re watching as a woman, you can certainly vouch for the accuracy of what she says.

There’s a delicious kind of sass to this part of the routine, with Gadsby having clear fun at raising a middle finger to the haters, and it’s heartening to see

Gadsby also uses, as she did in Nanette, her background as a History of Art student to provoke laughs. In response to detractors describing her first show as a ‘lecture’, she proceeds to begin a mock History of Art lecture that turns into a segment where she makes fun of some of the unusual aspects of the paintings projected onto a board behind her. Here, she makes jokes anyone with a keen eye and a sense of mischief could make while wandering through an art gallery, but regardless, it’s difficult not to laugh at the silly side of art that she showcases in her show. There’s a delicious kind of sass to this part of the routine, with Gadsby having clear fun at raising a middle finger to the haters, and it’s heartening to see.

Ultimately, there is a sense within Douglas of just how strong Gadsby is, both as a comedian and within herself. We’ve already seen her vulnerable side, but it’s lovely to see a side to her character that is confident, feisty and taking no prisoners. It makes for some outrageous yet intelligent fun. Hannah Gadsby once revealed on stage that she was considering quitting comedy for good – it’s a huge relief that she didn’t.