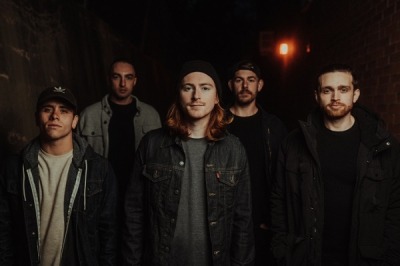 Currents ‘The Way It Ends’ review: an unrelenting maelstrom of power

How do you follow up an almost perfect debut? It’s a problem many bands would kill to have, but a problem nonetheless faced by Connecticut Metalcore outfit Currents after 2017’s The Place I Feel Safest, an album that comfortably made my top 10 Metal records of the last decade. After an exploratory EP, 2018’s excellent I Let the Devil In, the band has settled on a new direction: they may have changed stream, but once again have struck absolute gold.

Every single was better than the last. Releasing the heaviest track on the album as a first single is a ballsy move, but the crushing ‘Poverty of Self’ left few doubters – a riotous social anthem that pulls few punches, neither as it roars from breakdown to breakdown nor in the lyrical department. The pre-chorus call of “The innocent, stripped of humanity” is followed by dissonant antagonistic chords, and after the second verse these are overpowered by Brian Wille’s perverse death metal screams “The classes separate, watching as the guillotine swings”. The inflection on “guillotine” is indescribably blood-curdling. It’s an education in how to write a brutally heavy song.

The next single, ‘Second Skin’, set a pattern for the rest of the album – one that you may not get on first listen. However, it eventually burrowed itself in the back of my head and has since taken up residence while many other songs have come and gone. This is evidence of the sheer songwriting talent which is so far ahead of most bands in the metalcore scene at the moment. It’s progressive but not in the sense of super-long prog songs that exist as a technical showcase. It’s progressive because every song feels like it’s going somewhere. It doesn’t feel like they are following a structure because the tension never drops.

‘Second Skin’ is a classic example of this: the chorus is immediately followed by a segway that ramps up the aggression, with the additional refrain in the final chorus and the punishing outro, it is an unrelenting maelstrom. This is where most of the growth has been since their debut: songs like ‘Tremor’ were heavier, but unsustained – the song didn’t hold the tension so much as explode intermittently. Instead, no track on The Way It Ends feels like a collection of parts.

Whether it’s heavy lyrical content or a riff change, you are thrown straight back into the maelstrom

‘Let Me Leave’ is sombre and reflective until the brutal outro, the guitars taking backstage for Wille’s improved vocals to shine. The mix is the best Currents have sounded yet –  his cleans are so good a solo effort could be a possibility in the future. However, he still packs his trademark screams, as abrasive and tenuous as though his vocal cords could snap at any moment, they grab the listener with a ragged urgency like each line could be his final words. It’s unrelenting even in the softer passages, which allows the guitar work to shine when it becomes heavier and more technical.

The album art is one of my favourites from this year, and presents featureless silhouettes diving from a cliff into a swirling maelstrom below. While the figures could represent the depersonalisation of performance, a key lyrical theme throughout, the maelstrom below may well be analogous for their riffs. The cyclical driving punishment of the main riff in ‘Origin’ shot across the bow by bouts of ambient electronica, pulls you in further with each repetition, as if their intent was to ragdoll you rather than stupefy.

Whether it’s heavy lyrical content or a riff change, you are thrown straight back into the maelstrom. The vocal step-down on the chorus of ‘A Flag to Wave’ catches you every time, as does the step-up on the outro to ‘Origin’. Particular one-line highlights are the escalating three lines at the ends of ‘Monsters’ – Wille squeezes more emotion out of the line “so much for the dream” than many records this year have managed across several tracks – and the hard as nails refrain to the otherwise more solemn ‘Kill The Ache’ (“If I let you stay, you will ruin everything”).

Part of the reason they are able to step up the aggression so instantaneously comes from their guitar tone: whilst not tuned obscenely low like bands such as Reflections, the guitars have an instantly recognisable and menacing bassy growl. It’s inherently antagonistic and sets the mood for the vocal discussions on the loss of identity, political turmoil and relationships falling apart.

The record’s atmosphere is dark and oppressive, like the storm on the cover. It is a mood record, despite all the individual moments of brilliance.  I usually only give a 5/5 for albums I find ground-breaking (Wildlife’s La Dispute, Death Grips’ The Money Store) and albums that capture the cultural zeitgeist – like Charli XCX How I’m Feeling Now. However, it would be unfair to this record to think of it in those terms.

The Way It Ends is instead 5 stars because I cannot give any good-faith criticism of the album in how it attains what it set out to achieve. So, what did this record achieve? It took a more restrained, melodic and mature approach to their dark subject matter; it created a consistent oppressive mood and tension; it provided intricacy. It’s more than just mosh pit fodder – I would recommend this as an introduction to anyone unfamiliar with the genre. It’s an example of what the genre can be, not sacrificing the attack but instead moderating it with great songwriting and a mature approach. I have no good-faith criticisms of the record. It did exactly what it was intended to do and achieved on every front.