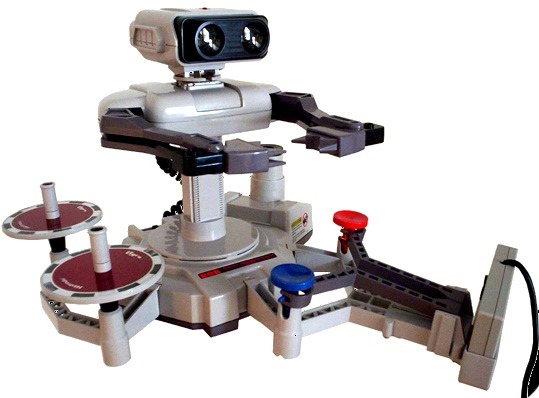 By Reece Goodall
Jun. 1, 2020
Posted in Concept to Console, Games

Nintendo has a history of wacky peripherals and consoles, from the initially controversial Wiimote to the eye-ruining Virtual Boy. But its most bizarre offering was one of its most important. The Robotic Operating Buddy, better known as R.O.B, was a small robot with limited gameplay potential. It lives on, however, as the figure that arguably saved the games industry, and it has now become a character in its own right. Here’s a look at the history of this most unlikely star.

R.O.B. may be a gaming peripheral, but it was originally conceived as much more than that. In 1983, there was a huge video game recession, mainly in the United States, which nearly killed off the entire industry. In Japan, Nintendo had the successful Famicom, but big questions were raised about how it would sell in America. The industry was trending away from game consoles to home computers and toys, and so it was decided to promote the console as an entertainment experience. Named the NES (Nintendo Entertainment System) in the US, the console appeared to be a robot-powered experience. R.O.B. was, in many ways, a Trojan horse designed to sneak the console into homes, and it largely worked, winning over gamers and retailers.

The robot’s days as a controller were over, but Nintendo never forgot this important part of their history

Although R.O.B. looked cool, the technology didn’t live up to the promise. It was hideously slow in its movements and lining up the eyes could be really iffy. Nintendo was convinced, though, that R.O.B. would be the first in a long line of winners, and that its personality would be hugely crucial to the success of the NES. As a result, a lot of the console’s marketing drew heavily on the robot, and Nintendo were pleased that the peripheral meant it reached the toy aisle. To save video games, the NES went undercover as a toy.

R.O.B. was initially packaged with two games. Gyromite is a puzzle-platformer in which the player has to collect dynamite before the time runs out, and R.O.B. uses gyros to move coloured pillars. In Stack-Up, the player has to match their block stack with the one on screen. Both games are curious, but neither are particularly good, given the limitations of the R.O.B. controls. But that didn’t matter: the ploy worked. Households bought the NES when it launched in 1985, and they soon grew to love Nintendo products as a result. There were four more Robot series games planned, but Nintendo saw that the console was being bought far more with Super Mario Bros over R.O.B, and the peripheral was quietly dropped.

The robot’s days as a controller were over, but Nintendo never forgot this important part of their history. R.O.B. made cameo appearances in a number of Nintendo games, piloting the Great Fox in Star Fox 64, and making up some of the treasure in Pikmin 2. He has also appeared in many of the WarioWare games, usually involved with 9-Volt. But he would have to wait until 2005 for his first playable appearance, where he was an unlockable character in Mario Kart DS, his only foray into the franchise. He’s a heavy character with his own cart, one of which greatly resembles his original accessories.

R.O.B. was a Trojan horse designed to sneak the console into homes, and it largely worked, winning over gamers and retailers

As a major part of Nintendo history, it was almost inevitable that R.O.B. would come to the Super Smash Bros. series. Premiering in 2008’s Brawl, R.O.B. uses his Gyro and a barrage of lasers to fight. He was also a significant player in Super Smash Bros. Brawl’s story mode, as a colony of R.O.Bs (Editor’s Note: What is the plural of R.O.B??) were forced to make bombs by the game’s villain, Tabuu. Once the player attempted to liberate the robots, a R.O.B. would join your party – the last survivor after a genuinely sad scene in which all the R.O.Bs die in an explosion. The fighter would return for the 3DS/Wii U and Ultimate outings.

Don’t expect Nintendo to return to R.O.B. anytime soon, even with the substantial augmentations in robotics. While a R.O.B. could work now, Nintendo are always looking to the next thing to engage their players, the latest of these being the Amiibo figures. But similarly, don’t expect Nintendo to forget this peripheral either: its transition from wonky robot to popular character is proof that the company loves this piece of its history.