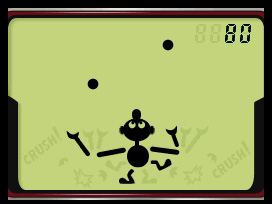 Stick men, LCD screens and simple games – it may not sound like much, but this is a recipe that changed the face of video gaming. In the last instalment of Concept to Console, I wrote about how the R.O.B. peripheral saved home-console gaming – this time, we’re looking at how the Nintendo Game & Watch invented the handheld console. Without this characteristically quirky bit of kit, video gaming as we know it today may not have ever existed.

There’s a folk story behind the 1979 genesis of the Game & Watch that is truly charming. It was reported that Nintendo engineer Gunpei Yokoi invented the concept on his way to work, watching a bored Japanese man play with his calculator. He wondered if it would be possible to create a watch that also functioned as a miniature game machine, helping people pass the time. Thus, the name is a literal one – he wanted to create something that was literally a game and a watch. In this simple observation, we essentially saw the birth of portable gaming as a whole.

There were certain constraints. The games could only be played on a single LCD screen, and there wasn’t that much in the way of complex gameplay. This didn’t detract from the fun and the challenge, and it really is a testament to how enjoyable many of the Game & Watch experiences are. Several companies, such as Mattel and Tomy, had already produced LED-based portable games, but they were slated for their uninspiring gameplay and console bulkiness.

Nintendo engineer Gunpei Yokoi invented the concept on his way to work, watching a bored Japanese man play with his calculator

Yokoi succeeded where these earlier consoles had failed. He prioritised fun gameplay over flashy technology, and was keen to ensure his console was as ergonomic as possible. It was clear that a joystick would be too cumbersome – he initially used a few buttons mapped to certain actions, and then incorporated a D-pad after its success in 1982’s Donkey Kong. Importantly, he opted for so-called ‘button cell’ batteries – they were small and cheap to replace, meaning the products would be inexpensive to run. Odd as it may be to a mobile phone audience, the bonus watch was also a huge selling point, and the alarm function (incorporated from 1981 onwards) was hugely useful.

Of course, this would be no use if the games were not fun and focused. As journalist Lara Crigger explains: “There was little room for design screw-ups. If the game mechanic wasn’t simple enough, or addictive enough, then the game failed. It couldn’t hide behind flashy FMVs or intricate story-lines. It was just player and mechanics, and that’s it.” The simple Ball (in which the player tried to juggle two balls) was released in 1980, and resonated with audiences, indicating the potential of the easy-to-understand, hard-to-master style of gaming. That the machines came with a Game A and B option also helped expand the console’s longevity.

Nintendo pursued the line further, releasing the ‘Silver’ and ‘Gold’ series (named after the faceplate colour). In mid-1981, we saw the ‘Wide Screen’ version, closely followed by the ‘Multi-screen’ series in 1982 with double the screens and double the gameplay- kicking off with Oil Panic. But it was the Game & Watch port of Donkey Kong that really cemented the range’s success. There were some slight misfires, with a clunkier ‘Tabletop’ series in 1983 and a poorly done ‘Super Colour’ version the next year, but it was the evolution of gaming that helped push the series to its natural end.

The series sold just over 43 million units worldwide, with the last entry being Mario the Juggler in 1991. In the mid-80s, Nintendo had released the NES, and Yokoi was focused on his newest handheld project, the Game Boy, released in 1989. Although players had enjoyed the Game & Watch franchise, gaming had simply evolved, and there was a newer superior portable console to take its place. There was still a little love for the series, though, with a number of Game & Watch Gallery games and ports released on all of Nintendo’s handheld consoles (save the Switch, as of writing).

Of course, in Nintendo land, nothing is ever truly confined to history. An amalgam of the black stick figure people eventually became the fighter Mr. Game & Watch in the Super Smash Bros series, premiering in 2001’s Melee. Many of his attacks are inspired by the Game & Watch back catalogue – his standard move in the bug spray from Greenhouse, he uses the frying pan from Chef and he can catch projectiles in the bucket from Oil Panic, to give three examples. His Final Smash sees him transform into the eponymous Octopus, carrying the players off the stage.

Whenever I write these history pieces, I always wonder what will happen to the character or the series next. In the case of Game & Watch, however, the sheer level of evolution means there can’t really be a future. They were born of a visionary moment, and it’s no understatement to say that they helped make portable gaming a reality. Without Game & Watch, the video game landscape would be a very different one.