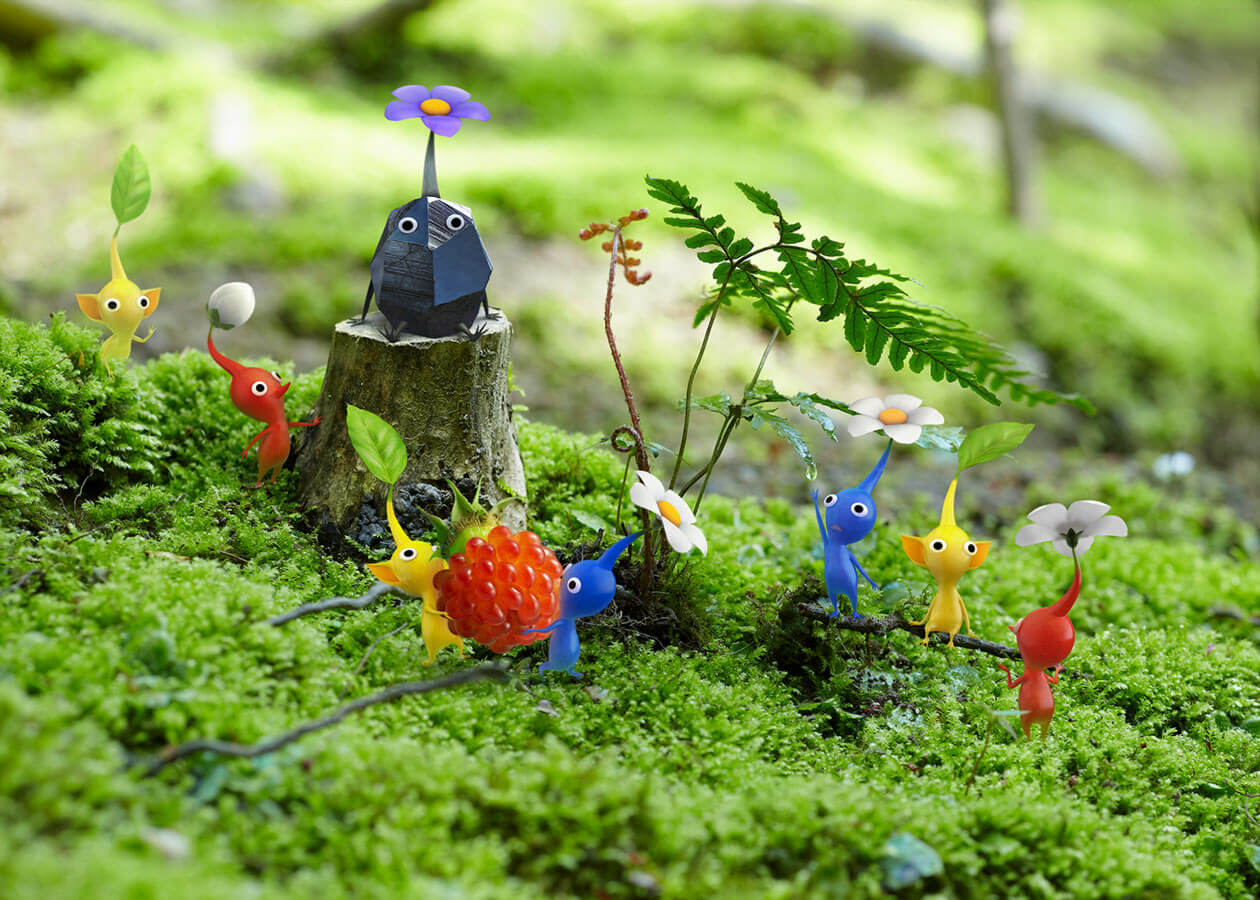 By Reece Goodall
May 11, 2020
Posted in Concept to Console, Games

If you were asked to name a great Nintendo franchise, you may head straight for the big-hitters, for the Mario or the Legend of Zelda series, or even Kirby could be up there. One of its more unique franchises is the Pikmin series, a charming strategy game based around adorable living plants. Here’s a look at the history behind this bunch of lesser-known Nintendo gems.

The Pikmin franchise is widely considered as originating from Shigeru Miyamoto’s increasing interest in gardening. Miyamoto explained that: “In the case of Pikmin 1, our original idea was how it would be nice if we would be able to see a bunch of small creatures doing something. Something like, they are protecting their own village and at the same time they are trying to grow and expand that village.” This evolved into a strategy game in which the player-controlled a group of up to 100 plant creatures, the Pikmin, to complete certain objectives.

The first Pikmin game arrived late in 2001 as one of the first GameCube games. It was well-received by players and praised for its lush environments and the adorable concept behind its cute characters. There were three types of Pikmin in this game – red, yellow and blue, which could deal with fire, electricity and water respectively. However, one of the game’s major handicaps was a choice that Miyamoto would later describe as “a little bit too strict and confining” – a 30-day time limit for main character Olimar to recover the parts to repair his ship, which essentially killed the exploration the game’s structure wanted to encourage.

Fans were keen on a new instalment but for years, the Pikmin series was restricted to cameos and re-releases

Pikmin did comparatively well given the struggling sales of the GameCube, with worldwide sales of around 1.2 million units. It was helped out in Japan by a song called ‘Ai no Uta’, which featured in commercials and broke the top 10 in the Japanese music charts for several weeks. It was clear, however, that Miyamoto and Nintendo were confident in the brand, and they began producing a sequel which was released in 2004.

Pikmin 2 was widely lauded as a major improvement on an already fantastic game. It rectified many major issues with the first Pikmin. It removed the 30-day limit, and it introduced dungeons, which negated sundown (thereby ending an in-game day). It improved the AI and the visuals and had a number of additions praised by fans. The two new types of Pikmin, a poison-resistant White and a particularly strong Purple, meant Olimar was better-equipped to face the environmental challenges. The dungeons also closed down the ability to pluck new Pikmin, encouraging strategic planning and partially shifting the focus on survival.

Fans were keen on a new instalment but for years, the Pikmin series was restricted to cameos and re-releases. Both games were re-released on the Wii in 2009, but their sales were not as strong as the originals and fans were somewhat underwhelmed. In the meantime, like many Nintendo icons, Olimar eventually wound up in the Super Smash Bros series. In his debut in 2008’s Brawl, he could wield up to six Pikmin, who followed him and could be used as weapons, while his Final Smash saw him leave the battlefield in his spaceship for the ‘End of Day’. There were also cameos in other Nintendo properties, including the WarioWare series and Mario Golf: Toadstool Tour (if you hit the ball into flowers).

Pikmin is one of Nintendo’s most charming and enjoyable franchises, and given the number of high-profile series Nintendo has created, that’s no small feat at all

In E3 2012, it was the moment Pikmin fans had been desiring for years – Pikmin 3 was announced, to be released the following year on the Wii U. Purple and White Pikmin were relegated to bonus modes, with the grey Rock Pikmin and the pink flying Pikmin taking their place. This instalment follows three new captains as they seek resources to save their home planet, and lets the player control all three, with their own groups of Pikmin, to accomplish tasks and solve puzzles. It again received critical acclaim, with fans and critics praising this new instalment.

Olimar remained a fixture of the Smash Bros series and, in 2012’s Nintendo Land, the co-op game ‘Pikmin Adventure’ was greatly praised. There has only been one other entry in the main series since – a 2017 spin-off action game called Hey! Pikmin for the 3DS. It’s a side-scroller of sorts that retains the series’ trademark charm, but is too simple and doesn’t offer much of the strategy that defined earlier Pikmin. It was praised by critics, though, for being one of the few Nintendo games to employ Amiibo in a more interesting and genuine way.

At E3 2017, Miyamoto confirmed once again that work was “progressing” on Pikmin 4, but there’s no clue as to when we’ll actually receive it. It took nine years for the third instalment, although I hope we won’t be waiting that long for number four. Pikmin is one of Nintendo’s most charming and enjoyable franchises, and given the number of high-profile series Nintendo has created, that’s no small feat at all.