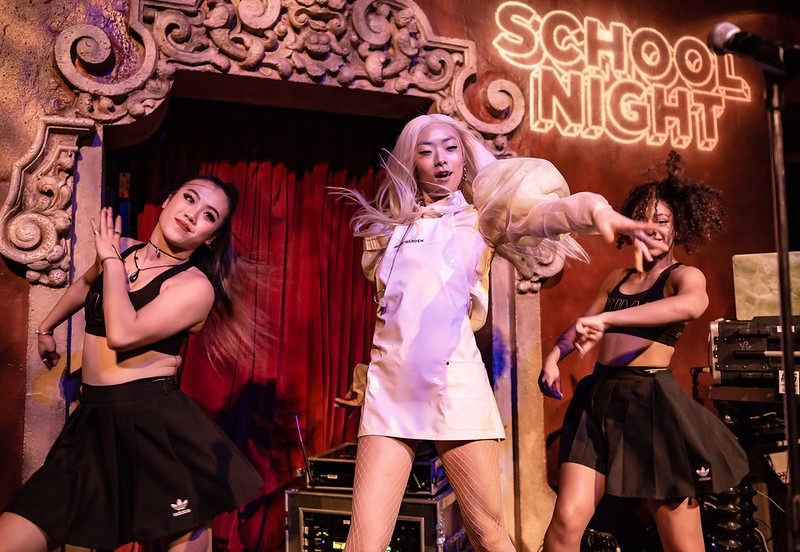 ‘SAWAYAMA’ review: Rina makes history through an ode to pop’s past

Rina Sawayama’s eponymous first full-length album, SAWAYAMA, is a fresh inquiry in meshing together a traditional pop album with experimental sounds. It builds upon the groundwork laid by her 2017 EP Rina, and sets out to accomplish even more. The result is a record that feels nostalgic, yet somehow futuristic, and still undeniably relevant.

Thematically, the album boasts an eclectic mix. Whether it be female empowerment, anti-capitalist sentiment or depression, Sawayama offers a raw insight into both her history and her mind. Having co-written each song on the album, SAWAYAMA is a manifestation of her being: where she’s currently at in her life, and what she’d like to change about it.

‘XS’ is as infectious as it is ironic

The album’s rock-orientated nu-metal opener, ‘Dynasty’, serves as the perfect introduction for what follows: Sawayama is brash and vulnerable as she laments her troubled family life and the pain her father and his family have brought her over the years. It serves as a point for reflection too – she questions if she’s able to stop the pain she feels and is strong enough to not give it any more room to fester.

However, SAWAYAMA’s centrepiece is undeniably second track ‘XS’. It’s a bit odd that it comes so early because no other song after it, despite being great in their own right, manages to reach the heights it so easily reaches. A satirical take on capitalism and our society’s misplaced value on money-bought hedonism, ‘XS’ is as infectious as it is ironic. Its brash early 2000s R&B/pop-inspired sound and periodic rock guitar riffs cleverly suggests excess and self-indulgence, underpinning the critical lyrical message.

These early-2000’s sounds compare to the noughties works of artists like Justin Timberlake and Britney Spears. Sawayama herself has stated that musicians like Beyoncé, Spears and Mariah Carey are amongst her main influences. The inspiration that these artists and their music have had on Sawayama is an interesting one: perhaps this album signals a coming wave of early 2000s pop-inspired albums like this one. Fans of the era can only hope.

The only other track that comes close to matching the irresistibility of “XS”, is “Paradisin’”. The pop-orientated yet punk-like track feels like a carefree joyride as Sawayama sings about “Paradisin’/ Livin’ my best life thrivin’”. The punk-inspired sound fits well with the lyrics’ overall concentration on having fun through rebellion. Sawayama herself said the track is supposed to be a theme song for a hypothetical TV show about her life and the song definitely emulates her intentions. The track sounds like a song you would expect to hear in the opening credits of late 90s/early 2000s shows such as Freaks and Geeks and Veronica Mars.

On “Chosen Family” and within the LGBTQ community, she has found a safe place in which she is welcome

SAWAYAMA’s fast tempo from start to finish only takes one momentary pause on its penultimate track, “Chosen Family”: a heartfelt message to the LGBTQ community and the support she’s received from them over the years.  Throughout the album, Sawayama feels so confident in who she is but it comes across as though that’s because she has no other choice. She has to be confident in order to protect herself from all the pain she feels inside. On “Chosen Family” and within the LGBTQ community, she has found a safe place in which she is welcome.

As a pop album, Sawayama is one of the best of the year’s and, dare I say it, the century. Each track tells a story that cannot be skipped. It should be experienced as a whole and, when listened to from start to finish, it paints a coherent plan of where Sawayama hopes to go on her ever-evolving musical journey. She uses the album to try and push pop music’s evolution forward and break genre barriers. And she doesn’t just succeed in this: she excels more than you could ever imagine.