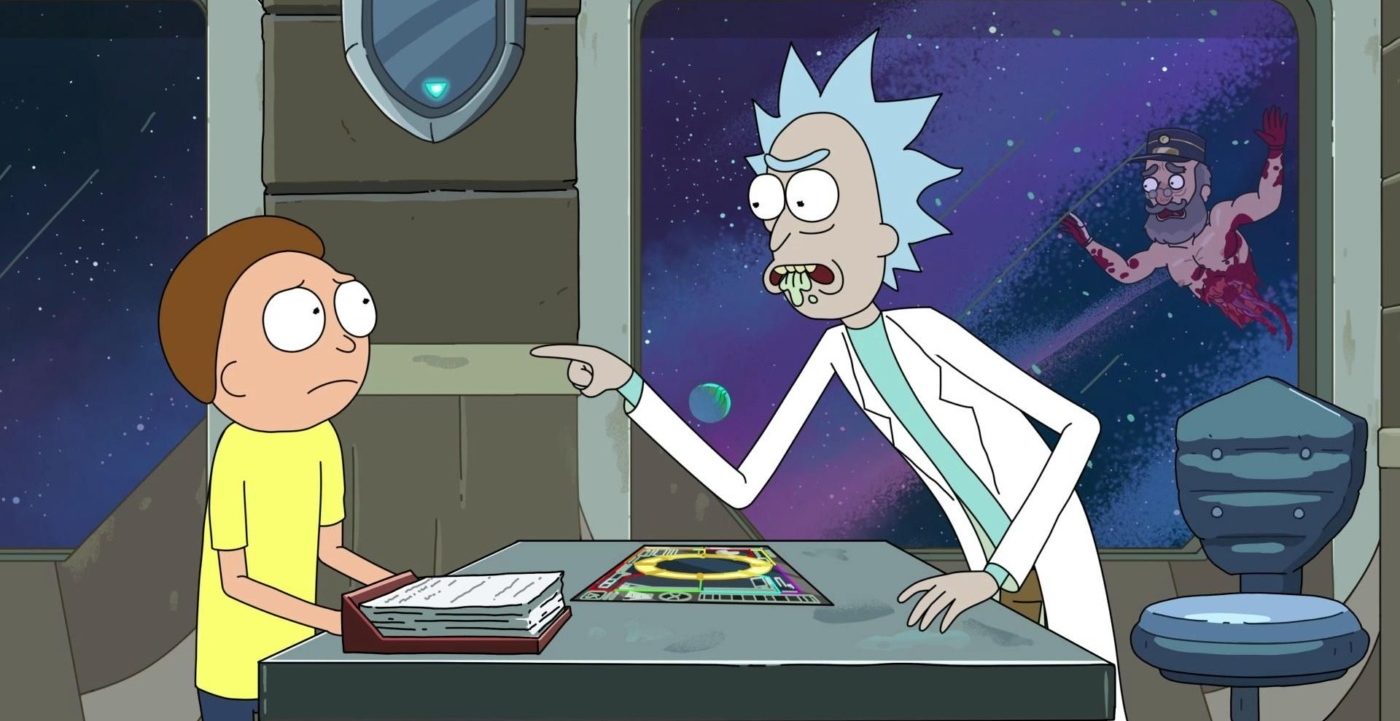 Good news, Rick and Morty fans – after an extended hiatus, the show has returned for the second part of its fourth season. And it resumes at pace, with an episode that proves there’s nothing else like it on TV. ‘Never Ricking Morty’ sees our heroes face the concept of storytelling itself, in an experience that is really inventive but maybe a little too clever.

On a train travelling through space, a wandering man is asked for his story about Rick Sanchez. This is the first carriage on a fabled Story Train, which sees Rick and Morty unite in an attempt to escape their own narrative conventions. As the vehicle barrels through the fourth wall and our two heroes come face to face with the powerful Story Lord (Paul Giamatti), will they ever be able to disembark? And do the narrative devices that govern their adventures even really matter anymore? How can we function when meta-plot commentary is the entire plot?

The show is calling itself out for some of its past storytelling, and sets itself up for the future by limiting its future – it’s truly impressive

Rick and Morty has always been a fairly meta show, but ‘Never Ricking Morty’ takes it to a new level – the whole experience is one huge romp through storytelling. We have criticism of the “uptight and overwritten” anthology format (“If we wanted one-offs, we’d do Interdimensional Cable”), of dealing with canon and maintaining continuity. Rick also offers a typically-Rick version of the Bechdel test, forcing Morty to be a progressive writer – it pays out as painfully and hilariously as it sounds. The show is calling itself out for some of its past storytelling, and sets itself up for the future by limiting its future – it’s truly impressive.

I think, perhaps more than any other episode of that show, that ‘Never Ricking Morty’ is packed to the rafters with material. A lot of it is really random and bizarre, and yet it somehow all works. There are some really dark lines dealing with a murdered old man, and they’re fantastic – I won’t ruin them for you. We see the return of many classic characters, from Birdperson to Mr Meseeks, and Snowball the dog to Abradolph Lincler, and yet nothing feels crammed. The writing is as on point as ever, doing more in twenty minutes than a lot of shows manage all run. And few shows would ever get away with presenting their end in the middle of a random episode.

The writing is as on point as ever, doing more in twenty minutes than a lot of shows manage all run

My major issue with ‘Never Ricking Morty’ is that it is far too clever for its own good – a lot of the time, I had no idea what was going on. It’s so meta, it hardly feels a satisfying watch (although I suspect that may be the point somewhat). Rick constantly gets annoyed with the adventure, calling out a frustrating lack of narrative cohesion, but that doesn’t negate the fact that there is actually very little. Normally when writing a review, I rewatch Rick and Morty to get the good lines – this time, I had to rewatch twice just to even understand it. There are also a lot of comments on the fans, and this is something that has cropped up a lot this season – I suspect a lot of good will for Rick and Morty will evaporate if this happens all the time.

‘Never Ricking Morty’ is a roaring return for the show and perhaps its most ambitious episode to date. At times, it’s a baffling watch, but there’s so much good that it’s easy to miss this. As this episode features essentially every moment from the trailer, I really have no idea where we’re going next – but I’m really excited to see. If the writers keep this pace up, the rest of this season could be some of Rick and Morty’s best episodes yet.