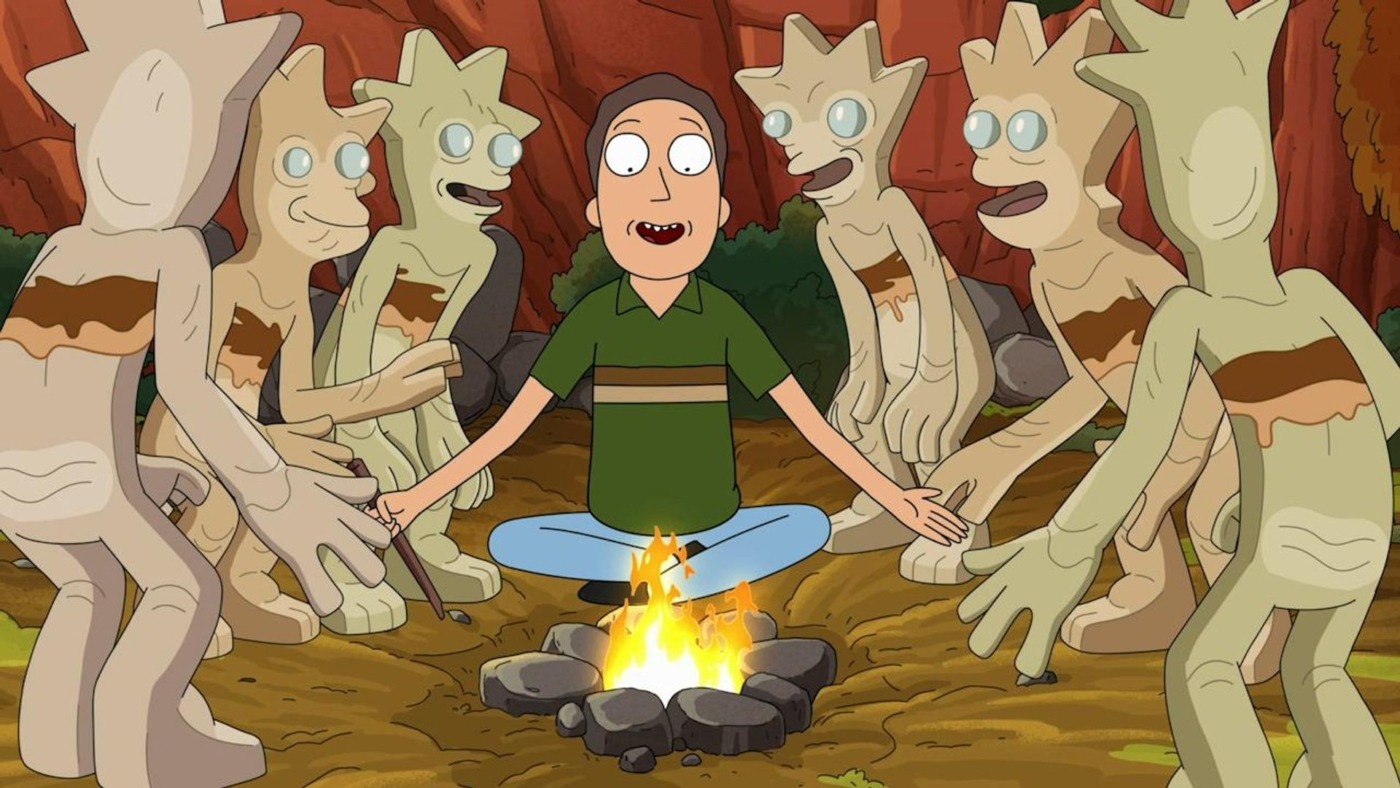 We’re off camping in this week’s instalment of Rick and Morty, but things obviously go a little off the rails. And that description may also apply to ‘Childrick of Mort’, which derails a strong run of episodes with something that is mostly weak filler. There are some good lines in this episode and it benefits from an increased focus on Jerry, but it’s one that I won’t be watching again in a hurry.

The Smith family are heading off on a camping holiday, and Jerry is eager to prove his worth to his kids. But the family’s plans are derailed when Rick receives a phone call – he had a one-night stand with a sentient planet, and the planet is giving birth. Beth pushes Rick into reluctantly caring for the clay creatures, and the two look to strengthen their father-daughter bond. Meanwhile, Jerry’s rejection by his children sees him become part of the clay person society, while Summer and Morty wonder whether their lack of life skills could prove fatal.

I’ve been grumbling about the fact that we’ve seen very little of the Smith family throughout this half of the season, and ‘Childrick of Mort’ rectifies this. It’s always a pleasure to see Jerry, particularly as Chris Parnell’s delivery is always perfect, and his B-plot is the best part of the episode – an episode full of Jerry would not be enough Jerry. It’s also good to see Sarah Chalke get more to do as Beth, as the episode (unsuccessfully) tries to mine the Beth-Rick relationship and actually delivers a couple of heart-warming moments in the process.

After the fantastic trip with Morty’s character last episode, it’s strange to see one with few interesting character moments and no development

However, with the full family on board, the episode doesn’t really know what to do with them. After the fantastic trip with Morty’s character last episode, it’s strange to see one with few interesting character moments and no development. Much though I enjoyed the Beth-Rick moments, it’s nothing we haven’t seen before and in better episodes. Similarly, although it was unusual to pair Summer and Morty and let them be siblings on an adventure, their arc here is really terrible. We’ve three plots going on at the same time, and it’s hard to be overly invested in any of them.

There are some good lines in ‘Childrick of Mort’, but it’s hard to ignore that there are comparatively few laughs. Some sequences feel like they should be funnier than they are – as Rick and Beth assemble a huge factory, it felt like an occasion for jokes, but there weren’t many. Similarly, a huge fight is normally good fodder for material in Rick and Morty, but nothing really happens – it goes on for ages and it’s not particularly interesting. And, unusually for this show, I actually saw where it was headed long before its endpoint. Rick and Morty thrives on unpredictability, so this was a let-down.

For the first time this run, I had no real urge to rewatch the episode once it was done, and that says a lot

I did enjoy ‘Childrick of Mort’, but I wanted to like it a lot more than I did. For the first time this run, I had no real urge to rewatch the episode once it was done, and that says a lot. Perhaps it’s because the run has been so strong up to now, but the lack of good jokes and the inconsequential feel of the story means ‘Childrick of Mort’ has set a low bar for this half of the series. For many TV series, this may have been a good instalment, but we know that Rick and Morty can put out better than this and it usually does. Hopefully we’ll have a good finale next week to close things on a high.